johansson continues to impress for caps 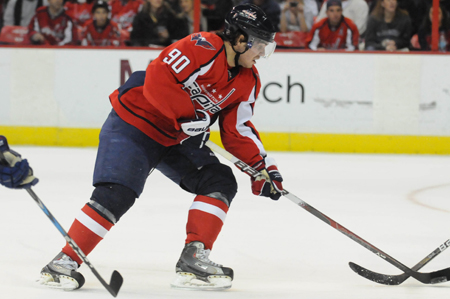 Yesterday I was fortunate enough to have some of the best blogs dedicated to covering the Washington Capitals participate in a roundtable discussion on a variety of topics — ranging from summing up the regular season in one sentence to making bold postseason predictions.

And because I really enjoyed the insight each of these bloggers provided, I stayed out of it and refrained from sharing my perspective. But with the playoffs just days away, there are a few topics we covered that I want to focus a little extra attention on.

Today, I wanted to spotlight the second question from yesterday’s discussion which was:

Which Caps player has impressed you the most during the regular season? Why?

While there are several solid choices, including Michal Neuvirth, John Carlson, Karl Alzner and Scott Hannan (the names chosen during the roundtable), the player who has stood out most to me is rookie center Marcus Johansson.

While 13 goals and 14 assists for 27 points in 67 games played might not be the most eye catching of stats, the 20-year-old earns my vote because of the way his season has played out. Early in the year he seemed like he might be on the verge of being overwhelmed by the speed and physicality of the NHL game. But as the season went on, Johansson appeared to find a groove.

The kid doesn’t take penalties (he’s got 10 minutes in the box all season), he’s been an important penalty killer when some of his teammates have failed to show the same level of discipline and best of all, when top center Nicklas Backstrom went down due to injury, Johansson stepped in and never missed a beat. In fact, I’d argue that when Johansson found himself on the top line with Alex Ovechkin, he played some of his best hockey all season long.

Before the all-star break, Johansson had six goals and six assists and was a -6 in 38 games. Since then, he’s scored seven goals with eight assists and is a +8 in 29 games. His shooting percentage is up nearly three percent and the two minutes of additional ice time a night show his coaches trust him.

So I caught up with Johansson before the Caps took off to face Toronto to chat with the youngster about his rookie season and here’s what he had to say.

It’s safe to say that most rookies seem to hit a wall at some point during their freshman season in the NHL, but you appear to be skating better and with more confidence as the season has played out. How are you able to avoid what’s happened to so many other rookies before you?

“I don’t know,” Johansson admitted. “I think I’ve just been getting more confident all the time and the more you get to play, the more confident you feel. And that’s when you can begin to make stuff happen. The more that happens, the more you want to play with the puck. I think that’s what improved my game — is just gaining that confidence and finding ways to play my game.”

Are there nights when your head is still swimming out there on the ice or do you think you’ve maybe reached a point where the lightbulb went off and now you’re like “Okay, I know what it takes to be successful at the NHL level?”

“Yeah, there are still moments like that,” he said. “You’ve always got to bring your ‘A game.’ If you’re not on your toes, then you’re gonna get beat pretty bad. That’s one of the first things I noticed — you can’t take a night off.  The guys are so good in this league and it really is a battle every night. But that’s what I love about it.”

You’ve been blessed with speed that any hockey player dreams of having, but you’re also a center and someone who sees lots of time on the penalty kill, which means you’ve also got to be  defensively responsible. How tough is it to pick your spots when you want to take off or when you need to play it a little safer?

“There’s always gonna be opportunities to do that, but like you said, you need to be smart when taking your chances,” Johansson said. “You’ve got to wait until maybe your winger gets it out of the zone and then you can go. You can’t just take off and hope someone is going to get the puck out because you’re going to get caught out of position. I think that’s the biggest thing in those situations. You’ve got to be sure your guys have the puck and you’re not taking bad chances.”

Obviously Caps fans have been thrilled with your performance in your rookie season, but how do you think you’ve fared thus far?

“I think I started out just kind of so and so,” he said. “But I think the more I’ve gotten to play and the further the season has gone on, I’ve gained more confidence and gotten back to playing my game. That’s been a huge improvement to my game and the last half of the year has felt really good. Hopefully I can continue to build off of this and continue to improve.”

How excited are you for the playoffs?

“Very excited,” Johansson said. “It’s going to be fun. The whole atmosphere of being in the playoffs and everything else is going to be amazing.”

If not for a spectacular save by Maple Leafs goalie James Reimer in the third period, Johansson would have tallied the game winner for Washington. Fortunately for him, the Capitals went on to win 3-2 via shootout and locked up yet another division title. A hot goalie might have gotten the best of Johansson on this night, but if he continues to play this well, it’s only a matter of time before those pucks start to go in more regularly.