alzner is finally at home in washington 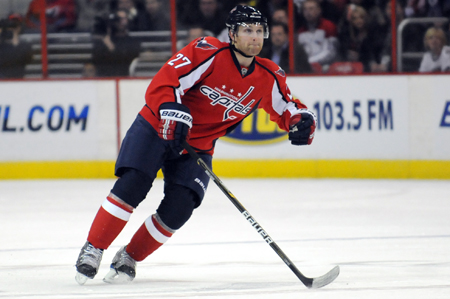 [Editor’s note: This is part two of a magazine-style feature story on Washington Capitals defenseman Karl Alzner. For part one, click here.]

Once the initial warm and fuzzy feelings had come and gone after defenseman Karl Alzner was drafted by the Washington Capitals in 2007, reality set in that there was plenty of work to be done.

Just because Alzner donned a Caps sweater for a photo opportunity during the draft didn’t actually mean he was a lock to make the opening day roster.

“It was tough to start out in Hershey,” he said. “I had dreams of playing in the NHL, so when I got sent down to the minors, it was really tough to handle. Especially with the situation I was in – being the seventh defenseman during camp. Normally NHL teams take seven defensemen. I was kind of getting excited thinking I could be on this team and then I get sent down because of cap issues and stuff, so it was difficult to let it all sink in and just start playing hockey again.”

While it might not have been his first choice, Alzner was sent to the Hershey Bears – the American Hockey League’s most storied franchise. It might have been a tough pill to swallow initially, but Alzner now admits the move was a blessing in disguise.

“It ended up being incredible for my career,” he said. “I think the best way to gain experience is to win because it’s tough to lose games and get better. You’re so worried about doing everything the coach says and everything else that you don’t necessarily do the things you need to do in order to get better.

“The coaches in Hershey gave me the green light to do anything I wanted to do,” Alzner continued. “I didn’t always take full advantage of that, but I definitely tried to do a few things I normally wouldn’t. Looking back, Hershey was a great place. I’d love to go back some time – not to play, because I want to be in the NHL – but I’d love to go back to visit.”

“It’s still frustrating that I could have been in the NHL for maybe two extra years if things were a little different,” he said. “But it was a blessing in disguise. I never would have been the player I am now if it wasn’t for Hershey.”

In fact, because of injuries to established defenders such as Mike Green and Tom Poti, Alzner has played in all 76 games this season – averaging just under 20 minutes of ice time a night.

“You just see a confidence,” said Capitals coach Bruce Boudreau of Alzner. “He’s no longer a guy that’s worried about getting sent down to the minors. He just plays and he’s as steady as we have back there. He’s had a great year.”

Alzner’s teammates have noticed a change in the youngster as well.

“I think he’s responded very well,” said Caps forward Mike Knuble. “I think he got a lot of time last year so he probably proved to himself that he can play at this level. It was pretty much written on the wall all summer that he was going to be here this year and now he and [fellow rookie defenseman] John Carlson are our shutdown pair.

“He’s been very steady,” Knuble continued. “He’s not flashy, he just makes easy plays. He’s a smart player on the ice who uses good positioning. As the season has gone along you can see they’ve given him more responsibility.”

Never underestimate the importance of confidence. Without it, playing careers can end in a flash. Conversely, once a player finally gains confidence, he’s able to take his game to new levels.

““It’s all a lot easier now,” Alzner said. “The first 10 games or so I was kind of struggling a little bit to find my role on the team. Being a young guy in my first full season I don’t want to step on any toes and I didn’t want to do anything a rookie isn’t supposed to do. So I ended up trying to stay under the radar a little bit too much, I think. But talking with the coaches and some of the other guys really helped me out.

“I just feel confident out there on the ice now,” Alzner added. “I’m just going out there and playing. I’m not worried about messing up anymore. Before, I was worried about superstitions and about doing something wrong out there. But I talked to a few NHL players who have had long, successful careers and they all tell me you need to have a short memory.”

Superstitions have been attached to Alzner for as long as he’s been a member of the Capitals organization. He is, after all, the players who refused to stock food in his fridge for fear that the moment he let his guard down, the team would demote him back to the minors.

So to hear he’s freed himself from that unnecessary burden … well … that’s kind of a landmark moment in the maturation process of young Karl Alzner.

“I got rid of all of it,” he said. “That was one of the big things in my head. I spent too much time worrying about that stuff, so by the end of last year I didn’t want to think about any of that. This year is pretty much superstition free. I have a routine and all, but it’s no longer like, ‘Uh oh. If I don’t do this then I’m not going to have a good game.’”

And Alzner’s teammates couldn’t be happier.

“Thank God he got rid of his superstitions,” Carlson said.

“He’s great though,” he added. “We’re good friends off the ice and I think we’ve done really well as defensive partners on the ice. We’ve been together a couple of years now and it’s been nice to play alongside him.”

If this season’s success is any indication, Caps fans can expect to see Carlson and Alzner – affectionately known as “Carlzner” – manning the blueline in Washington for years to come.

And while having two of the top-ranked prospects in all of hockey is a happy ending any Caps fan can get behind, this story doesn’t conclude on the ice. It ends in Alzner’s kitchen.

Because, best of all – Alzner actually uses his refrigerator now.

“I probably have too much food in there now,” Alzner said with a laugh. “It’s so packed, I can’t really find anything. I’m kind of living in the lap of luxury right now and really enjoying being here. I love playing in the NHL and realizing a dream, so I’m just having fun.”

Honestly, who could blame him? He’s come this far, so why not enjoy it a little?