karl alzner is living a dream with caps 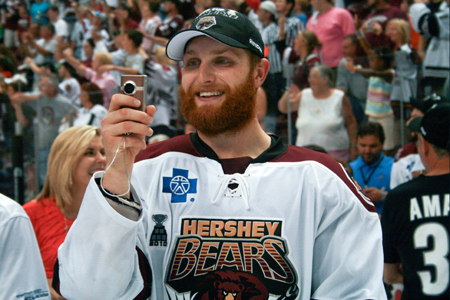 [Editor’s note: As most of you know by now, I am the editor of Hail! magazine – a free digital publication dedicated to the Washington Redskins. In each issue, we run in-depth feature stories designed to help local sports fans learn more about the athletes playing for their favorite football team.

Since it’s the offseason and there’s nothing but drama involving the owners and players, I’ve decided to turn my attention to the Capitals. So this is part one of a magazine-style feature story on Caps defenseman Karl Alzner. Please enjoy and check back tomorrow for the second chapter.]

While it might have taken a bit longer than anticipated to get to the National Hockey League, Karl Alzner got an early start to his hockey career – lacing up his skates and joining a league before his fifth birthday.

Of course, hockey is such a way of life in Burnaby, British Colombia that the Washington Capitals rookie defenseman would have gladly started his playing days even earlier if he could have.

“Right away, as soon as I first stepped onto the ice, I was in love,” he said. “There wasn’t ever a time when I wasn’t sure if hockey was for me. There were obviously times when I didn’t want to go to practice because I was too tired or I wanted to hang out with my friends, but it was something I wanted and needed to do.”

During the good old days, when Alzner and friends passed time by playing pond hockey, the youngster pretended to be Steve Yzerman or Joe Sakic – two standout centers who also came from British Columbia.

“I know I’m nothing like those guys, but those are two players I really looked up to,” Alzner said. “There wasn’t ever one person who I saw and said, ‘I’m going to try and play like that guy’ though. I mean, I liked Scott Niedermayer a ton and he’s my favorite defenseman, but I don’t play that way.

“So while I was initially drawn to a player like him,” he continued. “Once I began to watch and understand the game more, I was more drawn to someone like Nicklas Lidstrom – someone who plays smart and solid defensively. Don’t go out there and try to fight or crush everybody. Just play a more frustrating game for your opponent.”

Embracing that mentality has served Alzner well. So well, in fact, that he was drafted in the first round, fifth overall, by the Capitals in the 2007 NHL Entry Draft.

Being such a high draft pick, it wouldn’t be a stretch to think that a young player as gifted as Alzner would automatically assume it’s a foregone conclusion he was in the express lane to the NHL.

But the 22-year-old swears he never assumed his dream was within reach until he was selected to represent Team Canada during the World Junior Hockey Championships in 2006-07.

“That was the year before I was drafted,” he said. “Once that happened, I felt I had a pretty solid chance of making it.”

The experience gained from playing for his country at such a young age – not to mention the gold medal that came with it – is easily one of Alzner’s most cherished moments on the ice.

“To be honest, my first year in juniors, I got lucky,” Alzner said. “I played a lot and I was playing with guys like Ryan Getzlaf and Dion Phaneuf. All I’m thinking is, ‘These guys are way, way better than I am right now. There’s no way I’m going to make it.’”

Alzner had one assist and two penalty minutes in six games for Team Canada, but the statistics are irrelevant. Once he made the final roster, Alzner finally believed that the NHL was a real possibility.

“I still have a sign in my room that I made when I was six or seven years old that says I will make the NHL,” he said. “Obviously it was something in my head as far back as then as something that I wanted to do. I’ve just been fortunate that I was put into good situations and I worked as hard as I could.”

The downside though, if you can even call it that, is that once a player such as Alzner gets drafted, hockey is no longer a game. It’s a job. And with that job comes expectations from fellow players, coaches, front office personnel and the paying customers.

“It’s definitely a lot tougher now – off the ice and in your head,” Alzner said. “I talk about it with my buddies all the time. We reminisce about the good old days in minor league hockey when you didn’t have to worry about pressure or messing up.

“That being said, I like the challenge,” he added. “I like the battles. It’s tough sometimes to deal with because you want to impress everybody, but you’ve got to put that stuff in the back of your mind. That’s why we’re called professionals. We’re supposed to be able to deal with it all.”

In the days leading up to the 2007 draft, Alzner met with countless teams doing their due diligence during the evaluation process. He met with the Capitals during that timeframe, but didn’t walk away from that encounter feeling overly optimistic.

“I didn’t think they liked me,” Alzner admitted. “I don’t think it went that smooth, to be honest. But it could have been one of the tactics that they used because I know that some teams like to fool around with guys to see how they react.

“It just so happened to be lunchtime when my meeting with them took place,” he continued. “Someone was handing out Subway and it didn’t really seem like they were paying attention to the answers I was giving them, so I walked out of there thinking they didn’t really like me. I thought they were just going through their list of guys to interview or something.

“Another reason I didn’t think they liked me was because at the end of the meeting they asked me to tell a joke,” he continued. “I told one, but it was bad though and no one laughed. So now it’s like, ‘they probably don’t think I’m that good of a guy.’”

Fortunately for Alzner, telling a joke isn’t required to be an effective hockey player. The Capitals front office was able to look past his failed attempt at on-the-spot humor and drafted him anyway.

“When they actually took me, I was shocked,” Alzner said. “I was pumped because I was drafted in the NHL and I was drafted high too – not too many guys can say that. It was a great feeling for me and then I went down and started shaking hands with everyone at the table and the first thing I said was, ‘I guess you guys didn’t mind my joke after all.’ At least that time they all started laughing.”

Sadly, to this point, Alzner has politely declined repeated requests to reveal the joke in question.