could varlamov head back to russia? 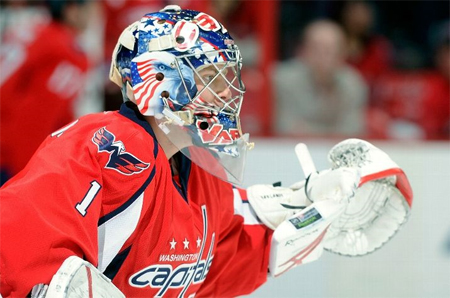 As if the Washington Capitals didn’t have enough on their plate heading down the stretch with injuries sidelining a slew of their top-end talent, some news came out yesterday afternoon that will no doubt be a topic of conversation moving forward.

Courtesy of Dmitry Chesnokov of Yahoo! Sports, Caps fans learned that oft-injured goalie Semyon Varlamov might not necessarily want to stick around Washington for the long haul. Here’s exactly what Chesnokov posted:

#Caps Varlamov’s Russian agent says “a few elite KHL clubs are interested in Semyon” and that Varlamov “is considering the possibility.”

Now look, I fully understand that this is simply an agent doing what an agent is supposed to do, but forgive me if it rubs me the wrong way.

The way I look at it, and the way the team’s front office has chosen to look at it, is that the Capitals have one of the deepest goaltending rotations in all of hockey with Varlamov, Michal Neuvirth and Braden Holtby.

While some have foolishly suggested that the Caps would be better off trading one of them away, general manager George McPhee has gone on the record in saying he’s not interested in moving any of the talented trio.

His stance appears to be, give each of them all a chance at the starting job here in D.C. and may the best man win. And really, that’s all you can ask for if you’re a player.

Just give me a fair shot. Put the proverbial ball in my court and give me a chance to sink or swim. That way, if I don’t win the job, I only have myself to blame.

Now, everyone seems to understand that except agents. And in this case, it seems that this particular agent is mighty nervous because Neuvirth and Holtby have both excelled while Varlamov is once again sidelined thanks to the most fragile groin since Fred Taylor’s heyday.

Coming into the season, the Capitals had no clear cut choice as their top goalie. Varlamov and Neuvirth were given first crack at it and if both faltered, then the team would either have to give Holtby a try or go outside the organization to bring in a veteran.

Again, both Varlamov and Neuvirth started the season on even footing. If anything, Varlamov had a slight edge because he’d started 28 regular-season and 19 postseason games for the Capitals prior to this season compared to Neuvirth, with 19 regular-season starts and no NHL playoff experience.

But Varlamov simply cannot stay healthy for any length of time. He went a month without action (from Oct. 21 through Nov. 24) due to injury and, most recently, he’s been out of the lineup since Feb. 20 because his groin is apparently made out of gummy bears.

With less than 10 games remaining in the regular season here’s how the scorecard reads:

So basically, all three have done an admirable job on the ice of making their case as to why they should be “the man.”

The truth is, Holtby is still probably best suited for a little more seasoning in Hershey and unless Varlamov magically finds a way to stop hurting himself, it’s going to be tough for the Caps to consider him the long-term solution.

The front office might very well believe that Varlamov gives them the best chance to win. Coach Bruce Boudreau might truly believe Varlamov is the goalie he wants in net for a Game 7 with the season on the line.

But it’s impossible to feel good about a player who simply cannot stay healthy.

Neuvirth has been the workhorse this season and has done an admirable job in net for the Capitals while goal scoring and the powerplay have been down all season long.

He’s done nothing to suggest he shouldn’t be given first shot at back-stopping the Caps come playoff time and if he excels this postseason, then why wouldn’t he deserve the chance to lock down the job more permanently?

So Varlamov’s agent is feeling the pressure and this is how he responds. He’s basically saying, “My client reserves the right to take his ball and go home.”

These are two outstandingly gifted athletes. They both possess skill sets that most kids can only dream of. They’re both only 22 and (presumably) have long careers ahead of them, either here in Washington or elsewhere.

Right about now, this feels like two kids got into a fight at the bus stop and as soon as one of them got the upper hand, the other kid’s father got involved. But make no mistake, it doesn’t make your kid (or in this case, your client) any better when you try to pin down his opponent and do his dirty work for him.

And on the subject of Varlamov heading back to Russia – playing in the KHL against over-the-hill has-beens like Jaromir Jagr or Alexei Yashin certainly isn’t going to help Varly improve his game. It’s just going to make him irrelevant.

So sit down, shut up and let this situation resolve itself the right way – on the ice. Let the two goalies make the case for themselves without agents or other outsiders trying to insert themselves into the discussion.

Seriously, is that too much to ask?