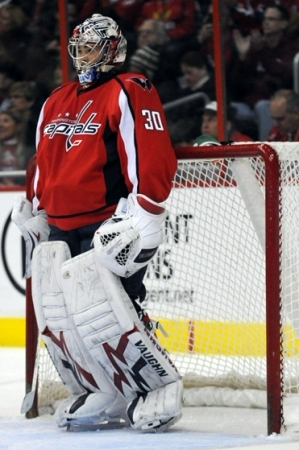 With nine games remaining in the regular season, the time is now for the Washington Capitals to turn their attention to the Stanley Cup playoffs.

Sure, there’s still an outside chance the Caps could overtake tonight’s opponent – the Philadelphia Flyers – and finish the regular season as the top team in the Eastern Conference for a second consecutive year, but that shouldn’t be a priority.

After all, the Capitals have managed to get bounced from the playoffs each of the last three seasons while having “home-ice advantage.”

Philadelphia, Pittsburgh and Montreal each came into the Verizon Center and won a Game 7, so maybe switching things up isn’t a terrible idea.

Getting healthy and mentally prepared for a postseason run should be the only concern – which is why I’m completely on board with resting captain Alex Ovechkin now.

But careers aren’t defined by regular season accomplishments and accolades. As Ovechkin very well knows, legends are made in the playoffs.

And the same holds true for the Caps as a whole.

This isn’t the WNBA. The Capitals don’t need to raise a banner into the rafters to celebrate that fans show up for their games.

Bruce Boudreau’s Capitals have had plenty of regular season success (going 183-77-38 the last four years). But, at 13-15, the team’s playoff record is a lot less sparkling.

So there’s no reason whatsoever for players to max themselves out during the last nine games of the season in hopes of winning the conference or keeping ahead of Tampa Bay in the division.

Just last season the Flyers were the seventh seed in the Eastern Conference and they got hot at the right time and made it all the way to the Stanley Cup finals.

No one cares what seed they were when they started. No one remembers that Philly had 33 less points than Washington when the regular season came to an end. The only thing that matters is where you finish in the playoffs.

But a few things need to happen for the Capitals to have any real chance during this postseason.

For starters, Ovechkin and a slew of his teammates – namely forwards Nicklas Backstrom, Jason Arnott, Eric Fehr as well as defensemen Mike Green and Tom Poti – need to get healthy. Or healthier.

No one is ever truly 100 percent this time of year (well, except D.J. King, who has played in just 15 more games than I have for Washington this season).

When healthy, the Capitals have one of the deepest rosters in hockey. Of course, that doesn’t really do you any good if half of the top-dollar talent is showing up for games in a suit and tie.

And the second, and most important, thing that needs to happen down the stretch is that Boudreau needs to decide which goalie he wants in net once the postseason starts.

A strong case can be made for Michal Neuvirth, Semyon Varlamov or Braden Holtby. Each is 22 or younger and all have shown signs of being able to carry the load.

But the problem the Capitals have faced in previous postseasons is picking the wrong goalie and then having to make a switch midway through a playoff series.

Making the right call on day one makes it that much easier for everyone involved. My good buddy, Neil Greenberg, dove into the numbers in hopes of figuring out which goaltender gives the Caps the best chance at postseason success and came up with Varlamov.

Nothing against Neil or even Varlamov, but if it were up to me I’d give the nod to Neuvirth.

First of all, Varlamov is simply incapable of remaining healthy for any length of time. That’s why Varlamov has started just 22 games for Washington this season, while Neuvirth has 40 starts and Holtby has 11.

It’s why we haven’t seen him in more than a month. I’m only half kidding when I say that Varlamov’s groin is the most talked-about body part in our nation’s capital since Bill Clinton was in office.

He’s a fragile snow flake, and for that reason, the Caps would be wise to bank on someone else when the season is on the line.

And if there was any doubt in my mind who that deserves to be, it was put to rest when Japers’ Rink posted this conversation ender – Neuvirth has never lost a playoff series since he came to North America four seasons ago.

Read that again – no one has ever beaten the guy. Neuvirth has an amazing 51-16 record with a 2.17 goals against average and a .929 save percentage over that span while backstopping two titles for Hershey in the American Hockey League and one for Plymouth.

The only time his team failed to win a championship was in 2007-08 when Neuvirth was injured.

So basically, the guy who has been the Capitals’ workhorse all season long has a playoff resume that franchises dream of. The youngster has been a winner on every level and seems more than capable of carrying the load for Washington.

The only question now is does Boudreau feel the same way. For the sake of everyone involved, we all better hope so.