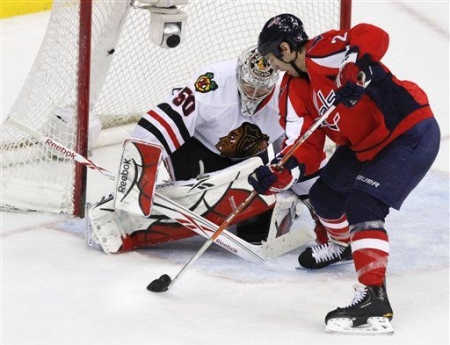 The Washington Capitals want to be where the Chicago Blackhawks are.

They want it all.

But in order for that to happen, they’ve got to put it together once and for all in the postseason. They’ve got to prove definitely that this team with these players and this coach have what it takes to be the last team standing.

Well, I’d be foolish to claim that one regular season game out of 82 of them deserves to be spotlighted more than any of the others, but there was a lot to like about Washington’s 4-3 overtime victory over the defending champs.

For starters, look at the names of the players who scored for the Capitals — forwards Boyd Gordon, Jason Arnott, Brooks Laich and Mike Knuble.

Each and every one of them is a grinder, by trade. All of them openly embrace the less glamorous aspect of their sport — namely fighting for loose pucks in the corner and making a living in high-traffic areas, even though it comes with plenty of bodily harm.

They’re not the biggest names on the team, but historically they represent the type of blue-collar player who rises to the occasion in the playoffs. The Capitals, led by these four gentlemen, dictated play all game long against a proven winner. It was such an enjoyable matinee matchup, that I openly admitted during the game I didn’t want it to end.

“All four lines were going; that’s why I didn’t shorten the bench,” said coach Bruce Boudreau. “They’re all contributing. It’s a nice thing to see, but that’s why you win — when everyone contributes.”

And while Boudreau is right to a certain extent, the truth is the Young Guns — captain Alex Ovechkin, center Nicklas Backstrom, defenseman Mike Green and enigma Alexander Semin — were nonfactors on this day.

Backstrom and Green are still sidelined by injuries and the Alex & Alex combo finished with a combined one assist and a -1 rating on the day. It used to be that if those four didn’t do the heavy lifting, this team was dead in the water. For one day, at least, that wasn’t the case.

The win was Washington’s 40th of the season, which is noteworthy because it means the Caps have reached the 40-win mark for a record four-straight seasons. So even though folks were prepared to jump off of tall buildings earlier this season, the Capitals are still producing at a pace never seen before in franchise history.

And let’s not forget, the eight-game winning streak is the longest the Caps have had since last season’s record-setting 14 in a row. Since the trade deadline, when general manager George McPhee added Arnott and defenseman Dennis Wideman, as well as the waiver claim for forward Marco Sturm, the Capitals have suddenly become the NHL’s hottest team.

And while earning the top seed in the Eastern Conference didn’t exactly work out a season ago, there’s always a chance for redemption. The Caps now trail Philadelphia by just one point for the top spot, although a grueling six-game road trip could be the only thing capable of slowing Washington down.

Either way, the Capitals once again resemble the team we all know and love. They’re the only winner this town has and if any team is ever going to make plans to spend the day with the leader of the free world, lord knows it’s got to be them.

Whether or not they can make it happen in the near future … well, we’re about to find out.