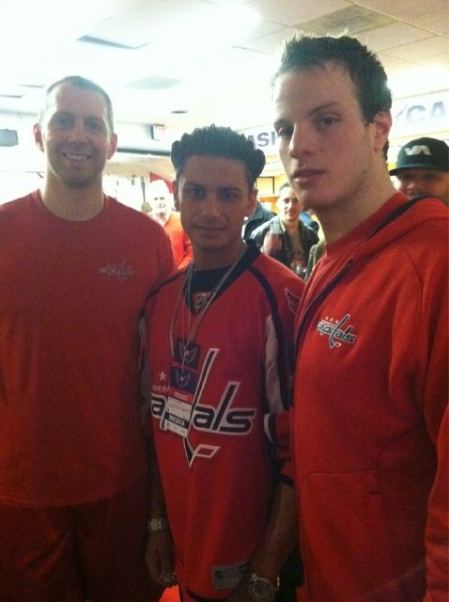 The Washington Capitals  defeated the Chicago Blackhawks 4-3 in overtime Sunday, but the story of the day involves the postgame celebration.

While Caps fans were filtering out of the Verizon Center savoring the team’s current eight-game winning streak, Capitals players were treated to a visit from DJ Pauly D of MTV’s Jersey Shore. This moment, you might recall, has been building ever since DJ Pauly D’s music made a cameo on a certain HBO reality-based TV program featuring the Capitals and the Pittsburgh Penguins.

Since this isn’t something that happens every day, it’s safe to say most of the locker room – whether we’re talking players, media members or whoever else happened to be around – were mesmerized by this guy.

Whatever the case, even forward Mike Knuble, who would normally have been the man of the hour after scoring the overtime winner, had to pause and soak it all in.

As someone asked him for his thoughts on the Blackhawks game, Knuble started to answer and then stopped.

Don’t worry, big guy. We all were. Here’s video, for those interested.