getting to know marco sturm 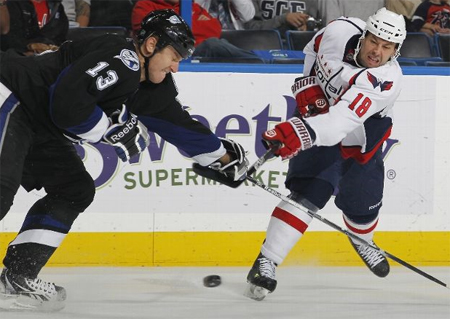 When the Washington Capitals take on the Edmonton Oilers tonight at the Verizon Center, they’ll have a chance to match their longest winning streak of the season – at six games.

It should be pointed out that during the current streak, each contest has been decided by just one goal and, most impressively, the opposing teams scored first in all five games.

So while the Caps still struggle offensively and the powerplay in particular is a train wreck, coach Bruce Boudreau can at least take some satisfaction in knowing his players are able to handle adversity.

In fact, one of the first comments made by the trio of newcomers – center Jason Arnott, forward Marco Sturm and defenseman Dennis Wideman – to Boudreau was how noticeable it was that no one on the Capitals roster panics if the team falls behind early.

While other teams may allow doubt to creep in during those instances, the Capitals – for better or worse – have backed themselves into that corner often enough to be able to battle back.

Since you’ve already heard from Arnott and Wideman, it’s only fair that I spent some time with Sturm, the 32-year-old left wing whom the Capitals claimed off of waivers from the Los Angeles Kings, Feb. 26.

He’s exactly the low-risk, high-reward type of player Capitals general manager George McPhee likes to roll the dice with, so if he can get healthy it’s not unreasonable to think he can be an effective player come playoff time.

Some of the other guys compared the adjustment of being in a new locker room to the first day of school. Is that how you feel these days as you get used to the Washington Capitals?

“Yeah, there’s always kind of a weird feeling when you come to a new team,” Sturm said. “You meet a lot of new guys, a new staff and everything else surrounding the team, so all of that takes a while to get used to.”

You’ve been in the NHL for 12 seasons now. Can you tell me a little bit about what you bring to the table for those Caps fans who might not know much about your playing style?

“I guess the biggest thing about me is my speed,” he said. “I’m a faster skater who likes to create a lot of scoring chances for my linemates. I like to try and create more room for my linemates and in the past, I’ve been a 20-goal scorer. And I can still put the puck in the net from time to time as well.”

How surprised were you when you found out Washington had claimed you off of waivers?

“I was surprised,” Sturm said. “With my history of injuries and stuff like that, you never know, so it was shocking at first. But after a few hours I was really excited to come here because I know it’s going to be a great team.”

Before landing in Los Angeles, you spent five seasons in Boston. Obviously you played the Capitals once or twice during that timeframe. What’s your take on the make-up of this roster?

“They were always a very hard team to play against – especially with so much depth at forward,” he said. “They play hard and they have lots of talent, which is why I was so excited to come here.”

Thanks to goal scoring woes and a season-long slump on the powerplay unit, some Caps fans are overly concerned about this team’s ability to make a run in the playoffs. How worried should the locals be about that stuff?

“I don’t worry about that stuff at all,” Sturm said. “Like I said, there’s so much talent here and so much depth in the lineup. It’s a long season and every team goes through stretches like that. I know some guys are frustrated about that stuff, but eventually it will come and pucks will find the net again. When that happens, no one will talk about it anymore. So I don’t worry about it at all.”

During one of your first shifts in Washington, you found yourself on a breakaway and nearly scored a beautiful goal. Was that a case of maybe being a little too excited to make a strong first impression?

(Laughs) “I was,” he admitted. “That might have been my first breakaway in a year, so I was a little excited. Unfortunately it didn’t go in, but hopefully there will be more chances to come.”

With roughly 20 games to get acclimated to your new team, what do you hope to accomplish between now and the end of the regular season?

“For me, personally, I just need to play games,” Sturm said. “I didn’t play too many in L.A., so I want to try and find my game again. If I can do that – if I can be the same old Sturm – I’d be very happy. I want to just find ways to help my team.”

With you being a veteran, how obligated do you feel you are to speak up in a younger locker room like this if things aren’t going well?

“Yeah, that’s just part of it,” he said. “I’ve been around a while, so I will say something if I have to. If I see something like that, I know when is the right time to speak up. But there are a bunch of veterans here, so I don’t think that’ll be a problem. We’re getting down to the playoffs here and hopefully we can crank it up a notch.”

With the Eastern Conference being so wide open this year, what do the Capitals need to do to stake their claim as the team to beat?

“We’ve got to play a little more consistent,” Sturm said. “We’re making a lot of little mistakes – we don’t want to give the other team two-on-ones or three-on-twos. You just can’t do that. Good teams will take advantage and bury us right away. If we can do a better job on that though, I think we’ll be fine.”