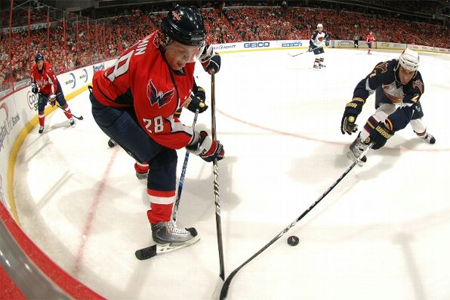 You’d have a hard time finding anyone in our nation’s capital with more patience than Washington Capitals general manager George McPhee.

That was my initial reaction after yesterday’s news that the Capitals agreed on a one-year extension with enigmatic forward Alexander Semin for $6.7 million.

Even though seemingly everyone in town is panicking because the Caps are no longer the offensive juggernaut fans had grown to know and love, the man affectionately known as GMGM is giving his team every possible chance to win from within.

In this case, that meant extending Semin – a wild-card player who, when he’s on his game, ranks among the league’s elite. Of course, when he’s not at his best, he’s as much of a liability as he is an asset.

So basically, while the team was eager to dole out long-term contracts to forwards Alex Ovechkin and Nicklas Backstrom, everyone involved decided the best course of action in this case was another one-year deal.

“A lot of times when you do these deals, it’s basically the player’s preference,” said McPhee during a conference call yesterday. “Does he want to do short-term? Does he want to do long-term? Alex was basically comfortable with another one year deal and that was fine with us.”

“We were wide open to [long term extension] discussions,” he continued. “We said we could do one, two, three years or longer if you want to talk about it. We were open minded about whatever you would like to do here. The player came back and said they were comfortable with a one or a two, and last week said a one year deal would be fine. And we said, ‘Okay.’ After that, it was a matter of working up a number. It was done this week.”

The extension was for $6.7 million, which is important because that’s the annual cap hit of Backstrom’s deal.

“We just didn’t feel that it would be fair to go beyond that,” he said. “They are two really talented players. I wouldn’t call it a ceiling, but we just thought if the two of them were at that number, then everyone would be comfortable with that.”

This really is the best-case scenario for everyone involved. You might remember that before the season began, I predicted that the team would trade Semin before the end of this season. My thought process was that the price tag on a long-term deal would be too much for the Caps to handle and they’d try to get something for him before he hit the open market.

Apparently there was a third option – another one-year deal to delay the inevitable for another day.

For the Caps, it makes sense rather than breaking the bank on a player who has troubles staying healthy and can disappear from the stat sheet for weeks at a time.

For Semin, it also makes sense because if the rumors are true, Washington is the only team in the NHL he cares to play for. As the story goes, Sasha would rather head back to Russia and play in the KHL than suit up for any other team stateside.

So it looks like the team and the player will continue to do this dance as long as humanly possible. Bigger picture though, this is the latest example of McPhee’s undying faith in coach Bruce Boudreau and his current roster.

In the past, McPhee tried making bold trades in hopes of bolstering his team’s lineup for a deep playoff run (Joe Corvo, anyone?) without success. This time around, he seems inclined to take a deep breath, sit back and give the current incarnation of the Capitals the opportunity to sink or swim on their own.

Goal scoring may be tougher to come by this season, but McPhee is confident that once Semin returns to the lineup after the all-star break, the 40-goal scorer will help guys like Brooks Laich and Mike Knuble regain their mojo.

If you really think about it, it’s tough to image many general managers showing this level of restraint while the Caps continue to piss away winnable games – especially within the division.

And considering Washington has been shut out more times this season than the rest of Boudreau’s tenure combined (eight times this season versus seven times prior to the 2010-11 season), it’s not exactly the easiest leap of faith.

In fact, as I continue to watch the Capitals’ season-long struggle to find the back of the net, I keep going back to an expletive-laced line from Boudreau during HBO’s amazing Caps Pens 24/7.

“This is a really important period for this year,” Boudreau said during the team’s eight-game losing streak. “You gotta say it’s [expletive] over. If you don’t say it’s over, then something bad could really [expletive] happen. I don’t think we want the bad things to happen. Too many of us are enjoying it here, [expletive] like it here. So let’s get out of our [expletive] funk and do it now.”

Even Boudreau knows that status quo simply isn’t enough. The fact that this coach and these players have had success in the past guarantees nothing today.

Rest assured that every other team out there is trying to find ways to get better. If you’re not getting better, you’re getting worse.

Boudreau doesn’t mince words. Too many of these guys are enjoying their time in Washington, and if they’d like to continue to make a living playing for this team, then they need to find ways to contribute. If not, they’ll eventually be shipped out in favor of someone new.

Fleischmann was deemed expendable when Colorado defenseman Scott Hannan became available and the rest is history.

Of course, that’s been the only real move McPhee has made this season. Otherwise, he’s been content to fill voids created by injuries, etc. with call-ups from the team’s minor league affiliate, the Hershey Bears.

At some point, these players – Semin included – are going to need to find a way to produce more consistently. There’s only so many times the Caps can get shutout by a mediocre Atlanta Thrashers squad before even the most patient of general managers feel obligated to do something.

Boudreau knows it and has warned his players of the dangers of complacency. Now it’s on them to either put up or shut up.