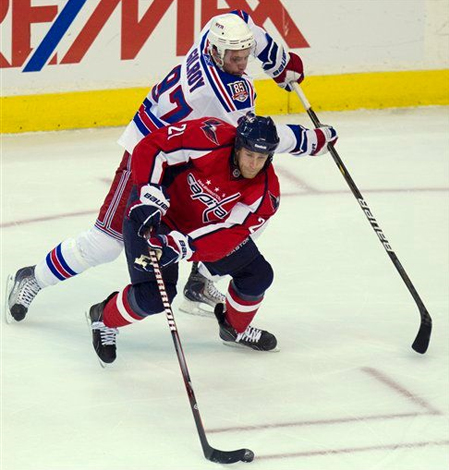 Okay boys and girls, it’s safe to say the Washington Capitals are officially a hazard to your health.

Long gone are the days of the high-risk, high-reward Capitals who were capable of blowing out anyone, anytime. Now, what you see is much more in line with playoff-style hockey — where the team is much more likely to be in a white-knuckles thriller as opposed to a run-and-gun shootout.

This was clearly evident last night as the Capitals fell to the New York Rangers 2-1 in a shootout.

While defense has become more of a priority these days and the team is now in the top 10 in goals against average, the margin for error has shrunken drastically. So if everything’s not going their way, the Caps end up giving up winnable games.

Even though there are still guys on the roster who believe the offense is always one shift away from breaking out, the truth is the majority of skill players who have provided the scoring touch in recent history are struggling to find the back of the net.

Over the last two seasons, Knuble has averaged 28 goals and 22 assists for 50 points. This season, Knuble is on pace to score just 18 goals and 15 assists for 33 points.

When either one of these guys is at the top of his respective game, he’s crashing the net, digging pucks out of the corners and scoring ugly goals that make the difference in tightly-contested battles.

These days though, as painful as it is to admit about two of my favorite players on this roster, they’re essentially dual liabilities on the ice. Neither is contributing offensively and neither has been all that great defensively either.

In the last 10 games, Knuble has just two goals, one assist and a plus/minus of -3. Laich has one goal, two assists and is a -5 over the same 10-game span. So basically, in the last 10 games, they’ve barely contributed more than Alexander Semin (who hasn’t played in eight-straight games because of a thigh injury).

Digging a little deeper into the stats, you see that Knuble’s shooting percentage this season is 9.7 percent. Last season, mind you, Knuble scored on a ridiculous 19.2 percent of his shots, but his career average is 14.2 percent. So even though he had a career year last season, he’s still far off his usually shooting percentage over his 13-year career.

Sadly, Laich isn’t doing any better. His shooting percentage this season is just 7.7 percent, compared to 11.3 percent conversion rate last season and a 10.5 career shooting percent. And he’s also on pace to set a career high for penalty minutes, so when he’s not scoring, he’s picking up ill-advised penalties.

So yeah … not a lot to love about these two guys these days. The hope is that eventually one or both of them will snap out of this prolonged funk and begin to play at the level they’ve established throughout their respective careers, but at what point should we begin to worry?

When two of your top six forwards are failing to carry their weight, it’s only a matter of time before it comes back to bite you – especially when guys like Alex Ovechkin and Nicklas Backstrom are also not picking up points as consistently as they have throughout their careers.

The season-long struggles of Knuble and Laich obviously makes it tougher on coach Bruce Boudreau. When coming up with his lines, he has to decide whether to put the two power forwards together in hopes that they can out-grind the opposition or insert them into different combos in hopes that they can find a spark with other teammates.

Unfortunately, nothing seems to be working. Knuble seems to have lost his spot on the top line with Ovechkin and Backstrom – giving way to Eric Fehr and now Jason Chimera. So lately he’s been paired up with Laich and the best center available. Last night that was Mattieu Perreault, who did an admirable job in the role – even though the line still seems to have no rhythm or flow.

Scoring chances didn’t come easy for the Knuble-Laich-Perreault combo, and they finished the night with no points, just two shots on goal and a -2 rating. Ovechkin seems to be rounding back into form and grinder Matt Hendricks continues to have the hot hand of late, but until the Caps can find some way to get production from Knuble and Laich it’s tough to say they deserve the amount of ice time they’re getting.

If you’re an optimistic type of fan, you’re hoping and praying the return of Semin will help wake one or both of these guys up. Of course, the last time Sasha showed up on the stat sheet consistently was November, so who the hell knows?

While parting ways with 38-year-old Knuble shouldn’t really come as a surprise, it’ll be interesting to see what happens after the season with Laich. The six-year veteran is 27 now and therefore in the prime of his life.

Does he desire to try and get that one big contract on the free agent market or is he much happier changing flat tires in D.C., even if it means taking less money? Does a season-long slump in his free agent year caution other teams from offering a bloated $4 million a year or more to the Ladies Man?

And most intriguingly, does his limited production this season cause general manager George McPhee to re-consider keeping Laich around?

As someone who owns a Laich jersey, I’d like to think he comes out strong after the all-star break and reverts back to his high level of play. And then once the season is over, I’d love to see the team and the player reach a three- or four-year deal at a reasonable price tag.

But the longer this goes on, the more I allow doubt to creep in and begin to consider Caps hockey without one of Washington’s favorite players.