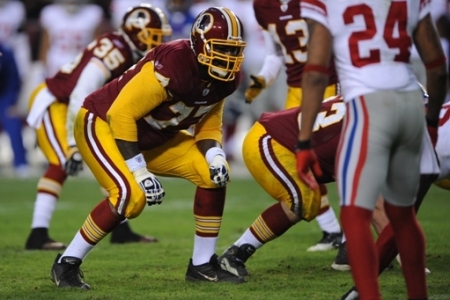 To put it kindly, the offensive line of the Washington Redskins has not been the franchise’s greatest asset over the last few years.

So when the Redskins made the move to acquire tackle Jammal Brown from the New Orleans Saints prior to the 2010 season, I was admittedly excited.

Sure, Brown missed the 2009 season while recovering from surgery to repair a torn labrum in his left hip, but he was a two-time Pro Bowler who had definitely made a name for himself in this league.

Pairing him with rookie tackle Trent Williams gave Washington a legitimate opportunity to solidify the tackle positions for the foreseeable future, so I was okay with the Redskins giving up what turned out to be a third-round pick in the 2011 draft.

And then the season started.

Brown clearly wasn’t playing at his typical Pro Bowl level in the first half of the season, and there were even times when the coaches had him rotating with Stephon Heyer – who has never been confused for an elite NFL lineman.

Just as critics had done with the Donovan McNabb trade, you had to wonder if the Saints had fleeced Washington by dumping a former Pro Bowler before anyone realized he was no longer able to consistently play at that level on a daily basis anymore.

And Redskins fans weren’t the only ones wondering what the problem was. Brown now admits that he too had concerns about his play during the first half of the season, and says he met with a doctor during the season to ask “Am I ever going to play like myself again?”

Brown says he met with a specialist early in the season and that his doctor told him “once that scar tissue breaks up, it’s going to start feeling a lot better.” Fortunately for the six-year veteran, that happened right around the end of October and he began to finally show signs of the athletically-gifted player the Redskins hoped they were obtaining when they made the trade.

“He’s made tremendous strides throughout the season,” said head coach Mike Shanahan during the season. “I’d say at the halfway mark, you couldn’t tell if he was going to get well. And then it just happened.”

I caught up with Brown recently to talk about his thoughts on the 2010 season and, more importantly, his plans for this offseason when he can walk away from the franchise as a free agent.

“The season started off slow for me because I was still coming back from the injury,” he said. “Coming off of the surgery from last year and then with me playing right tackle, it was kind of hard on it because now I have to press off of that leg and that hip that I had surgery on. So I started off kind of slow, but midway through the season – from Detroit and on – I started feeling good.”

That’s something a lot of people didn’t really understand during the season. When Brown was a left tackle, he could play through a left hip injury because whenever he needed leverage or to push off, he did so with his right hip. Once he came to Washington and was converted to the right side, he was then forced to push off of his bad hip while it was less than 100 percent.

As you might guess, that makes it tougher to do the job effectively. The good news though – for Brown and for ‘Skins fans is that the 29-year-old feels great these days and says there are no lingering issues.

“The hip has no problems at all,” Brown said. “It feels brand new. I just had to get through the scar tissue stage and then midway through the season I started feeling like my old self. Hopefully my play speaks for itself because I feel like I was playing a lot better in the second half.”

At this point I openly admitted to Brown that, as a Redskins fan, it would be a shame to see him hobbled for half of the season and then leave town as soon as he fully recovers and returns to his Pro Bowl form.

“I want to be back here in Washington,” he said. “It’s a good place and Coach Shanahan is a proven coach. I like playing for him. We’ve got to get a few things ironed out at other positions, but I hope I’m able to stay here.”

The thought of the Redskins lining up you and Williams, a fellow Oklahoma Sooner who you’re very close with, as the bookend tackles for the next few years has to be exciting to you, right?

“Definitely, and I hope the Redskins feel that way too,” Brown said. “Get me back here and then we’ve got Trent too. That’s a good starting point.”

I’m curious, as an offensive lineman – and specifically as a tackle, do you prefer blocking for a running back that is a straight ‘north and south’ kind of back or a guy who prefers to try and bounce outside the tackles?

“It doesn’t really matter to me,” he said. “But as an offensive lineman, you always want that running back who can bang when he has to. You want to block for that guy who can run in between the tackles and get that one tough yard. That’s my only preference of a running back.”

You mentioned Shanahan earlier. What is it about his offense that excites you? What’s the most challenging aspect of this offense?

“The thing about this offense is that all 11 guys have to be on the same page,” he said. “When that happens, we can have 80 and 90 yard runs. But at the same time, if one guy makes a mistake in this offense, that can crush the whole play.

“In other offenses, a guy can make a mistake and the play still goes on,” Brown continued. “But everything in this offense has to be in synch, so it’s important to keep some of these offensive linemen that we have. As you could see, as games went on we got better and better. We got better at running the ball and at pass protection because we started to gel with each other. That’s a big thing in this league – having a line that plays together consistently.”

The Redskins offensive line gave up 46 sacks this season, so obviously some changes are necessary. Williams is obviously going to be around for the long haul, but this is where the Redskins have to decide if Brown is a player they want to also try and build the offensive line around or not.

Personally, I’d love for Brown to stick around because I do think he’s still capable of playing a vital position at a very high level, but that decision is also going to hinge on the price tag Brown and his agent set.

Hopefully the player and the team can come to an agreement and then the front office can turn their attention to solidifying the interior of the offensive line. If not, giving up a third-round pick for a one-year rental who admittedly was less than 100 percent for half the season doesn’t exactly seem like a wise investment, does it?