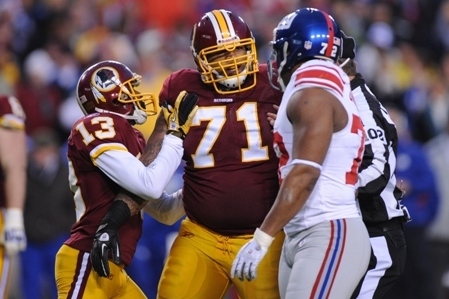 You might remember that not too long ago, the Washington Redskins neglected the offensive and defensive lines so much, that the fans actually rejoiced when the new regime used the fourth pick in the 2010 draft on Oklahoma tackle Trent Williams.

At the time, I called the use of the draft pick a groundbreaking moment because it was the first clear-cut sign that the Redskins might finally stop “handing out five-year, $25-million contracts to every free agent with name recognition and stop shooting their wad on draft day on glamor picks instead of positions of need.”

The hope was that the selection of Williams might have signaled the end of trying to sell jerseys and the beginning of finally trying to build a solid foundation. Once Pro Bowl tackle Chris Samuels was forced to retire because of a spinal condition, the Redskins offensive line easily became one of the worst the NFL had to offer.

Former Redskins quarterback Jason Campbell was sacked so many times in 2009 that he privately told me on more than one occasion that he didn’t feel like he had enough time in the pocket to move on to his second option before pass rushers had already blown through Washington’s substandard offensive line.

And while the Redskins offensive line allowed 46 sacks for the second-consecutive season, the line at least seems pointed in the right direction. Williams, at times, looked every bit the part of a dominant left tackle. Of course, there were other times when pass rushers took his lunch money, but that’s the life of a rookie offensive lineman.

Samuels once told me everyone gets beat at one time or another in the NFL, it’s how you respond to that adversity that defines what type of player you are.

I caught up with Williams after the 2010 season had concluded to get his initial reaction to his inaugural compaign.

“I did okay,” Williams said when asked to reflect upon his rookie season. “It’s something to grow from. That’s all I can ask for – something to build off of. Next year I have to be a lot better.”

You faced some of the most talented pass rushers the NFL has to offer this season, whether we’re talking about everyone from Mario Williams to Jared Allen to Osi Umenyiora to DeMarcus Ware. There’s no way it was that tough on a week-to-week basis in college, was it?

“It definitely makes you grow up fast, man,” he said. “You don’t have time to fool around. You’ve got to go out and be ready to play – especially when they’re depending on you to block on the quarterback’s blind side. It was tough. Nothing was easy.”

How long did it take for your head to stop swimming when you’re out there?

“I’d say it took about eight or nine weeks for me to just settle down and play,” Williams said. “Even then, I was still making mistakes I shouldn’t have made. I still don’t know if I’ve got it all down pat, but I’m a lot better than my first game.”

The Redskins offensive line has seemingly been in a state of flux for a couple years now. How important would it be for you if the team was able to bring back both you and Jammal Brown as the tackles in hopes of developing some chemistry and continuity on the line?

“That would be huge if we could lock him up for a while,” he said. “Me and Jammal are real close. We’re both Sooner guys. He’s been a huge help in developing me during my rookie year, so I’d love to have Jammal back.”

What’s your plan for your first offseason?

As you can tell, Williams was far from content with his rookie season. While he admittedly had some ups and downs in his first year, he’s definitely the type of player who refuses to be satisfied.

Instead of focusing on the 10 things he did right, he’s always going to be the guy who can’t get past the one thing he could have done better.

But honestly, isn’t that what you want from a top five pick? Wouldn’t you rather build your team around guys who have that drive and self motivation?

Defensive tackle Albert Haynesworth may be supremely talented, but he’s also a guy who has been known to mail it in from time to time. That’s not something that appears to be an option with Williams.

Even if everyone thinks he’s doing great and wants to pat him on the back, Williams, by all accounts, would much rather focus on what he needs to do to become a better and more consistent player. While that’s not something we necessarily knew about him on draft day, it only re-enforces my belief that Williams is exactly the type of player the Redskins can build a franchise around.

Now, if the front office could use this offseason to upgrade some of the personnel on the offensive line with Williams, the Redskins might finally be able to give the quarterback enough time to make some plays.

Of course, who that quarterback will be – Cam Newton? Jake Locker? Anyone but Rex Grossman? – is a question for another day.