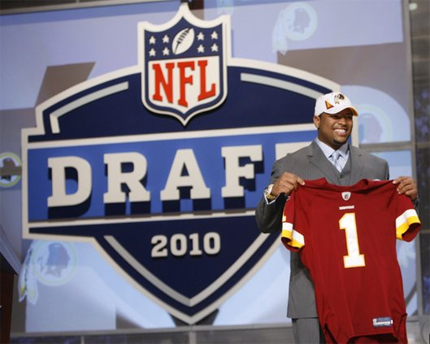 For the second year in a row, the Washington Redskins didn’t screw it up on draft day. While this hardly qualifies as an official trend just yet, ‘Skins fans might just have some reason for cautious optimism.

We all knew that sweeping changes were needed after a 4-12 season in which the Redskins rarely went into Sundays with a legitimate chance at victory, and that’s exactly what we’ve seen.

You can’t fire your owner, but everyone else in a position of authority has been (or will soon be) let go. General manager Vinny Cerrato? Gone and replaced by the competent Bruce Allen. Head coach Jim Zorn? Mercifully, he too was relieved of his duties and replaced by two-time Super Bowl winner, Mike Shanahan. Quarterback Jason Campbell? He’s still around for now, although folks say his house is already on the market and the team will ultimately release him if they don’t get a suitable trade offer. Oh, and he’s been replaced by Donovan F. McNabb, a guy with a much more impressive resume.

But the team didn’t just need to change their personnel; they needed to change the culture of losing and the flawed mindset at Redskins Park. The front office needed to stop handing out five-year, $25-million contracts to every free agent with name recognition and stop shooting their wad on draft day on glamor picks instead of positions of need.

Basically, they needed to stop trying to sell jerseys and start trying to build a solid foundation.

In the hours leading up to the first-ever primetime NFL draft, word on the street was that the Redskins had locked their sights on Tennessee safety Eric Berry.

Look, there’s no denying that Berry is a consensus top-four talent in this particular draft. His game-changing abilities have been compared to those of Baltimore safety Ed Reed, who we can all agree is one of the premiere defensive players in the NFL over the last decade or so. But Berry, simply put, is a luxury the Redskins couldn’t afford.

Campbell, who was sacked 43 times, told us at one point last season that he rarely had time to look past his first read. Basically, in his mind, if his primary target wasn’t open, then the play was dead in the water.

Trying to run behind that porous offensive line also ended Portis’ season prematurely, when he got K.O.ed against the Atlanta Falcons midway through the season. And once Portis went down, so did any hope of a running game (the Redskins running attack finished 27th in the league last year). We could go on, but honestly, it’s too depressing.

Here we are a year later and not much has changed on the offensive line. Sure, Artis Hicks was signed to compete for a starting job, but Heyer and Williams were still in the starting rotation during the team’s minicamp last weekend.

So when the Redskins selected Oklahoma tackle Trent Williams with the fourth pick in the 2010 NFL draft, it truly was a groundbreaking moment. When else has an entire fanbase overwhelmingly rooted for an offensive lineman to be their team’s top selection? Seriously, has it ever happened before in NFL history?

Fans get vocal about quarterbacks or running backs all time, but never for an offensive lineman. It’s roughly akin to a kid eating cake and ice cream for dinner every night for years on end until eventually growing tired and begging his parents for some vegetables. It’s just not something you’d ever expect to see happen – not with kids and not with the Redskins.

But that’s where we’re at. The Redskins went with Williams and suddenly, everything about this franchise looks a little bit more promising.

Last season, Williams – who is listed at 6-5 and 314 lbs. – earned consensus first-team All-Big XII Conference honors as he shifted to left tackle for his final season and allowed just two quarterback sacks. With Williams as the lone returning starter along the offensive line, the Sooners ranked 11th in the nation with an average of 289.23 passing yards per game and 16th nationally in fewest sacks allowed per game (1.15).

“Trent Williams is a person we had targeted that can not only play the left, but the right side as well, and he played the center position,” Shanahan said. “In our zone blocking scheme that we run, obviously we run the power scheme as well, but we thought he’d fit in very well. He’s a guy that’s got a lot of experience, obviously, being a four-year starter, playing a number of different positions. Hopefully he’ll come in here and compete right away, and show us what he can do.”

Shanahan also downplayed the pre-draft chatter of the Redskins targeting other players such as Berry.

“It’s an ongoing process,” he said. “You’re evaluating a lot of different people. You’re not really sure who’s going to go at one, two, and three, and you’re evaluating everybody. Sometimes you move up, sometimes you move down. There a lot of variables in there. You go through the due process, but at the end of the day we were hoping Trent would be there and luckily he was.”

Williams felt equally fortunate to end up a Redskin.

“Words cannot explain the feeling, especially going to Washington, which I feel is a dream situation for me. It’s a great feeling,” Williams said. “Just the type of offense they run. The coaches are the best coaches to play for. Coach Shanahan’s a Hall of Fame coach. It’s a dream situation. Anybody in this situation would prevail.”

In a bit of irony, the recently retired Chris Samuels was the team’s representative at the draft. Once the Redskins made their choice, Samuels was the player who turned in the draft card to the league office. If ever there was a changing-of-the-guard (or, in this case, tackle) moment, this was it. Over the next decade, Williams would do well to follow in Samuels’ footsteps, but let’s not get ahead of ourselves here.

Today is all about the dawn of a new day. Sure, we’d all love to see the Redskins come into an NFL draft just once with their full complement of picks, but honestly, what would ‘Skins fans have left to bitch about?

Like we said at the start, the Redskins have now, for the second year in a row, avoided their natural inclinations and actually drafted a player who provides a skill set the team was in dire need of.

Combined with everything else going on this offseason, it truly seems that for the first time in a long time, this team is in good hands on and off the field. There’s no telling what the future holds, but if nothing else, this offseason has restored hope to a fragile fanbase.

Hell, if the Redskins can continue this trend and successfully turn their first-round pick next year into a third-straight player who fills a need rather than sells jersey, then we might even have to invite the franchise back to the grown-ups table at league meetings. It’s crazy talk, we know. But a fan can dream, right?