10 redskins to build around 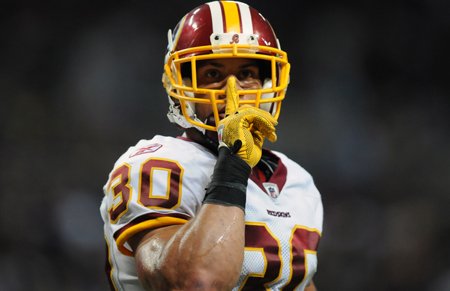 Flying back from Dallas after the Washington Redskins lost 33-30 to the Cowboys to drop to 5-9 on the season, I had an interesting conversation with a friend. With plenty of time to kill, we came up with a fun little game – pick 10 players from the current roster to build the team around. Just 10. That’s all you get.

The only stipulation was that you had to operate under the assumption that Mike Shanahan will still be the head coach, Kyle Shanahan will still be the offensive coordinator and Jim Haslett will still run the 3-4 defense as the defensive coordinator. That left open the possibility of choosing a lesser player simply because he was better suited to run the offense/defense the Redskins are working towards (Rex Grossman, anyone?)

What you’ll see with my list is that getting younger and more athletic was a priority. In fact, only one players over the age of 30 made the cut, while five of the players listed below are 26 or younger.

10. London Fletcher, middle linebacker – The one graybeard to crack the list is here simply because he’s a heart and soul kind of guy. Sure, he’s 35-year-old and better suited to run a 4-3 defense, but he’s also a gladiator who happily gives his team everything he has week in and week out as evident by his current 206 consecutive games played streak. Fletcher is so intensely fired up before kickoff that the 13-year veteran still pukes on the sideline every single Sunday. Hell, his own wife can’t imagine him not playing football.

If you’re rebuilding your roster from the  ground up, isn’t that exactly the kind of role model you want them to follow? So if I’m making one exception on this list, it’s got to go to Fletcher. After all he’s done for the Washington Redskins, I have no problem showing him the respect he deserves.

9. DeAngelo Hall, cornerback – With seven seasons under his belt, it’s hard to believe Hall is just 27 — especially when you factor in all of the ups and downs he had earlier in his career during his time in Atlanta and Oakland. But Hall, at his best, is a game changer (just ask Jay Cutler). He’s a cornerback who is capable of tilting the field in Washington’s favor and has the type of big-play potential the Redskins have lacked since Sean Taylor.

Consider this: in the last three seasons the Redskins have scored just two defensive touchdowns. Both came courtesy of Hall. Taking it one step further: Hall has one less touchdown than Clinton Portis over the last two seasons. Even though he’s a guy who lays an egg once or twice a season, Hall is still someone with eight turnovers to his credit this season.

8. Ryan Torain, running back – Torain is a 24-year-old who absolutely looks like a legitimate NFL feature back whenever he’s given the ball. But he’s also a guy who history shows has trouble staying healthy for more than two or three games in a row. His upright and physical running style leaves him vulnerable to injuries, but he’s also the one guy in the Redskins rotation these days who can burst out a 40-yard run seemingly out of nowhere.

When Shanahan drafted Torain in 2008, he immediately compared him to another Denver running back — Terrell Davis. And that guy had a pretty solid career. This season Torain is rushing for 4.9 yard a carry, which is something Portis hasn’t done since ’03. That’s reason enough to roll the dice with the Arizona State product and hope like hell he’s able to finally shake of the reoccurring injuries and finally make it through a 16-game schedule.

7. Chris Cooley, tight end – This might be surprising considering my professed love for all thing Fred Davis, but the truth is that Cooley is the face of the franchise. In addition to being a two-time Pro Bowler, he’s also the people’s champ and the team’s best blocking tight end. With four receptions, Cooley will tie receiver Ricky Sanders for fifth on the Redskins’ all-time reception list at 414, and with 11 more catches, the 28-year-old will tie tight end Jerry Smith for fourth place with 421 catches.

That would leave Cooley in the company of such legends as Art Monk, Charley Taylor and Gary Clark, which is more than enough reason to keep Cooley in burgundy and gold as long as conceivably possible.

6. Jammal Brown, right tackle – I fully admit that Brown’s career in Washington got off to a rocky start. The 29-year-old came to town via a trade with New Orleans and was clearly less than 100 percent at the beginning of the 2010 season. But what’s stood out to me as the season has gone along is that slowly but surely Brown is returning back to his Pro Bowl level of play. Brown has been dealing with an injury to his left hip since before the 2009 season, which is only compounded by Washington’s desire to move him to right tackle.

“When I was at left tackle I was pressing off with my right hip, so I was able to play the whole year with a torn labrum,” Brown said. “But when I got here they moved me to right tackle and I’m putting all that weight on my left hip. That’s what was making me hurt a little bit more … But everything’s good now.”

Since the Detroit game, Brown has looked more and more like the player the Redskins hoped they were getting when they made the trade with the Saints. His lateral movement and quickness seem to be back and Brown really seems to be getting his confidence back. It would be a shame for the Redskins to let him walk out the door right as he’s shaping back into form.

5. Carlos Rogers, cornerback – Look, I know Rogers can’t catch a football to save his life. Hell, even Rogers knows it. But the 29-year-old is the best lockdown cornerback the Redskins have and he’s also someone who can excel playing on the outside or at nickel. And because he’s the better lockdown cornerback, opposing teams prefer to throw at Hall, which is another reason why DeAngelo ranks among the league leaders in turnovers.

Although he’s missed three games this season due to a hamstring injury, Rogers played in all 16 games each of the previous two seasons. He’s durable and he’s reliable, so the hope is the Redskins will sign him to a new contract (Rogers is set to be an unrestricted free agent after the season) and turn their attention to getting better in the front seven.

4. Brandon Banks, kick returner – Not since Brian Mitchell has Washington had such a dynamic returner in the special teams game. The 23-year-old is generously listed at 5-foot-7 and 150 lbs., but that doesn’t stop him from being a threat to score a touchdown every single time he’s got the ball in his hands.

Banks might have has just one return for a touchdown this season, but he’s had several others called back because of penalties (two against Detroit and one against Minnesota). The undrafted free agent is so dangerous that teams are already going out of their way to kick the football away from him. Now it’s on the Redskins to figure out other ways to get Banks the ball more often.

3. Trent Williams, left tackle – Try to name another NFL fanbase that’s as tortured as ‘Skins fans. Go ahead. I dare you. It can’t be done. And Williams is the perfect example. When he was drafted, Redskins fans around the country were ecstatic because the front office had finally caught on that it doesn’t matter how many first-round picks you use on flashy skill positions – your team is doomed unless you make your offensive and defensive lines a priority.

Nothing against the 22-year-old, but he could have been anyone and Redskins fans would have rejoiced. Thankfully though, the first tackle the Redskins drafted with their top pick since Chris Samuels also turned out to be a helluva player. Sure he’s had his ups and downs this season as he’s taken on some of the best pass rushers in the game, but he’s got loads of talent and figures to solidify one of the most important positions in football for the next decade or so.

2. Brian Orakpo, outside linebacker – Orakpo is such a beast that opposing players can’t keep their hands off of him. Seriously, at least once a game you can pause the game and easily see the 24-year-old getting molested by an offensive lineman doing everything short of stealing his wallet in hopes of keeping the Texas Longhorn away from their quarterback.

While the Redskins seriously need to upgrade the defensive line and could stand to get other linebackers who better fit their 3-4 scheme, Orakpo’s 19.5 sacks in 30 games show he’s doing everything in his power to help his team win games.

1. LaRon Landry, strong safety – Last season folks were down on Landry because, there were times when he looked completely lost on the football field. But it turns out all that the only thing missing from the equation was a defensive coordinator willing and able to use the 26-year-old correctly. Back at strong safety this season, Landry spent the first half of 2010 terrorizing the opposition.

His 85 tackles in nine games are a testament to just how much of an impact the fourth-year pro had, and the Redskins’ 1-4 record without him in the lineup (not to mention the yards and points opposing teams have been able to rack up) prove that no player is more important to Washington than Landry.