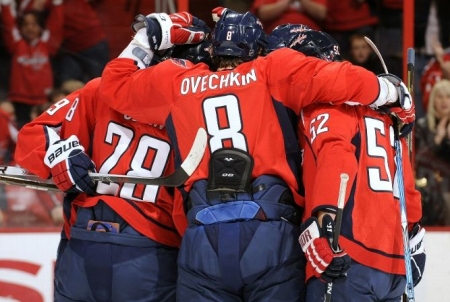 Yesterday I opened up a can of worms by bringing up a sore subject with most D.C. sports fans. Specifically, I mentioned everything that’s wrong with the Washington Redskins. Now, because I didn’t want to be a total buzzkill, I did so while also highlighting the one bright spot Washington has – the Capitals.

I’ve gotten plenty of feedback by way of emails and comments, but I wanted to take it one step further and really show what a change in mindset at Redskins Park could mean in just a few short years.

Case in point – since 2004, the Redskins have used a total of 44 draft picks. Over the same span, the Capitals have used 60 draft picks. (And just so everyone’s on the same page here: yes, both the NFL and NHL have seven rounds per draft.)

So before we even attempt to analyze how the respective front offices have fared in the draft in recent history, you can immediately see that the Caps have given themselves twice as many chances at success.

And really, if you look at those six names the Redskins actually used a first round pick on, they’re a pretty respectable bunch. Almost makes you wish they’d do it more often, huh?

But I digress. In order to truly illustrate the biggest difference between the Caps and ‘Skins, I’ve dedicated today’s post to those 12 first rounders. Sure, not every one of them was a home run. But when you give yourself that many chances, you’ll see just how quickly a team can stockpile young talent and ensure they’re competitive for years to come.

While some Caps fans still refuse to give Schultz the credit he deserves, the 24-year-old has established himself as a dependable option of the Caps’ blueline. Along with offensive-minded defenseman Mike Green, Schultz skates on Washington’s top defensive pairing and the results speak for themselves – last season, “Mr. Nasty” became the first Capitals player to ever lead the NHL in plus/minus, at plus 50.

Since 2007, Green has scored 68 goals and 137 assists for 205 points in 225 games played. Not bad for a defenseman. Each of the last two seasons, Green has been nominated for the James Norris Memorial Trophy, awarded annually to the NHL’s top defenseman.

In June, Pokulok signed a one-year deal to play for a German team, so it’s safe to say he didn’t work out with the Caps.

Finley is still considered a work in progress. He’s 6-foot-7 and 229 lbs. though, so if he ever gets it all together, he could be a force to reckon with.

The problem is, injuries and off-the-ice incidents have derailed the 23-year-old’s progress. So far, since being drafted by Washington, Finley’s dealt with a concussion, a hip flexor injury, a ruptured aneurysm in his arm and was arrested for disorderly conduct in South Dakota.

At 22, Backstrom is already considered one of the best players in the NHL today, and with good reason. In 265 regular season games, Backstrom has 75 goals and 204 assists for 279 points. It goes without saying that any player who can earn a point a game for that long is legit.

Making Backstrom even more invaluable is the fact that he’s never missed a game for the Capitals. While Ovechkin might be the face of the NHL, I’d suggest that Backstrom is, in fact, Washington’s most indispensable player.

When healthy, Varlamov looks every bit capable of being the Capitals’ number-one goaltender. Unfortunately, he’s been unable to stay healthy for very long.

While still considered a top prospect, Varlamov has lost his grip on the starting job in Washington to Michal Neuvirth, who was drafted 11 picks later in the same 2006 draft.

Varlamov is currently in Hershey as he tries to bounce back from a groin injury.

Considered one of the Caps’ best prospects since the day Washington drafted him, Alzner is finally here to stay.

Oh, and he was a key player for the Hershey Bears as they won back-to-back championships the last two seasons. All in all, I’d say he’s pretty good.

Sadly, Gustafsson looks like he’s going to fall into the “bust” category for Washington. That’s because the 21st overall pick in the 2008 draft already decided to call it quits – walking away from hockey last month at the tender age of 20.

The son of former Capitals forward Bengt Gustafsson had trouble staying healthy in recent years and informed the organization that hockey was no longer something he enjoyed playing.

Who doesn’t love Carlson? Seriously, the guy earned the nickname Captain America after netting the game-winning goal in overtime of the gold medal game to defeat Team Canada 6-5 at the 2010 World Junior Ice Hockey Championships.

Not to mention the fact that the 20-year-old also scored the game-winning goal for the Hershey Bears last season as they won their second-consecutive Calder Cup championship, and Carlson has now become a mainstay on Washington’s blueline.

By the time Carlson scored a game winner against Boston earlier this month, you could instantly see countless giddy Caps fans dreaming of the day the youngster replicate the feat in the Stanley Cup finals. I wouldn’t bet against him. After all, he’s managed to do it at every other level he’s played at.

If the name sounds familiar it’s probably because the last time anyone saw the smooth-skating 20-year-old, he was centering Washington’s top line with Ovechkin and forward Mike Knuble.

Typically that honor is reserved for fellow Swede Nicklas Backstrom, who just so happens to be one of the best centers in hockey, so that should tell you how much the Capitals think of Johansson.

Caps coach Bruce Boudreau loves to constantly tinker with his lineup, so chances are within the next seven days Backstrom will back to skating alongside Ovechkin, but in the meantime, the coach is tossing his rookie center into the high-pressure situation to see how he responds to the challenge.

“When he’s got the puck he’s creating things because his speed is allowing it,” Boudreau said of Johansson. “We’ve seen those flashes and it proves he’s going to be good, we’d just like to get on a more consistent basis.”

If ever there was a team willing to roll the dice on an 18-year-old Russian forward, it’s the Caps. And honestly, after the success they’ve had with his fellow countrymen, can you blame the organization for sticking with what works?

“People are concerned about signing and drafting Russian players, but we just feel that what we’re doing in Ovechkin that he’ll play in Washington,” McPhee said. “We can do some things that other teams are afraid to do.”

Scouts compare Kuznetsov’s game to that of winger Alexander Semin, which is ironic because once he hits free agency after this season, Semin might no longer be in Washington. But even if Kuznetsov isn’t ready for the challenges of life in the NHL by next season, the Caps have done such a solid job of creating depth throughout the organization that should Semin move on, Washington is still in good shape for the foreseeable future.