caps are everything redskins are not 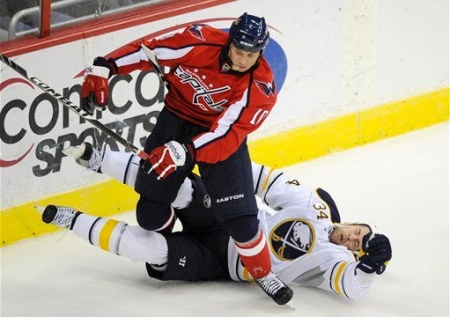 If ever there was a week to illustrate the differences between the Washington Redskins and the Capitals, it’s this one, boys and girls.

On Monday night, the Redskins fell asleep at the wheel just in time for a national audience to witness their humiliating 59-28 defeat at the hands of the Philadelphia Eagles. Their slow start ensured they spent the night playing catch-up, and by the time the ‘Skins began to actually resemble a professional football franchise, the outcome was already decided.

Just 48 hours later, the Capitals hosted the Buffalo Sabres – the only team to defeat them in their previous eight games. Unlike the gentlemen in burgundy and gold, the Caps decided to show up focused and determined from the get-go and were up 3-0 before Buffalo knew what hit them.

Instead of playing from behind the entire night, the Caps’ fast start ensured they were in the driver’s seat throughout the contest. When they suffered a letdown in the middle frame – allowing two goals in less than a minute – the Capitals still had enough of a cushion to recover.

Even though it came early in the game, the deciding moment of the night had to be when Buffalo defenseman Tyler Myers was penalized for holding Washington forward Alexander Semin. Because Sabres defenseman Chris Butler was already in the penalty box, the Caps were given nearly a full two minutes of five-on-three hockey.

Center Nicklas Backstrom scored a powerplay goal, with Semin and Brooks Laich assisting on the play, and the Capitals were off and running. It was a clear-cut example of capitalizing on an opponent’s mistake.

But the biggest difference between the Capitals and the Redskins has to be the fact that D.C.’s hockey team regularly gets contributions from the bottom half of the roster, while the Redskins are seemingly always waiting for high-priced talent to live up to their overinflated contracts.

Against Buffalo, the Caps’ third line – featuring Dave Steckel, Matt Bradley and Jason Chimera – was the difference. They set the tone early and finished the night with a total of two goals and three assists for five points.

“They were really good,” said coach Bruce Boudreau of his third line. “I thought they were our best line.”

Teams typically rely on their top two lines for offensive production – leaving the less glamorous duties of digging out pucks in the corners, crashing the net and bringing a physical presence for the second half of the roster. But when all those little things add up, like they did for Washington on Wednesday night, it can really be the difference between winning and losing.

“Guys like Stecks and Brads work hard all year and they don’t often get rewarded for their work,” said Chimera. “It’s nice to get a reward, get some goals.”

Critics continue to nitpick the Capitals – claiming they rarely ever play a full 60 minutes. And while this game wasn’t perfect, the Caps looked pretty sharp for 59 of the 60 minutes.

“We just had to settle down,” Boudreau said. “There’s been so much talk about us not being able to play defensively. We started to get all excited on the bench. The veteran guys just said, ‘Relax, we’re playing a great game. Let’s get ‘er going.’ And we did.”

And while there’s still plenty of hockey left to be played, the Capitals once again boast the league’s best record. Sadly, the Redskins are currently in 10th place in a very mediocre NFC and look nothing like a playoff-caliber franchise.

Oh, and the Capitals are 10-1 at home this season, while the Redskins are just 2-3. So yeah, if you’re looking for less heartache and headaches while you’re waiting for the Redskins to pay you reparations, then I’d humbly suggest you take the family out to the Phone Booth.

The newer fans may frustrate long-time Caps supporters with their inexplicable need to yell and chant seemingly every time the in-house announcer finishes a sentence, but at least the odds of a victory are in your favor. And on the rare occasions when the Capitals do lay an egg, at least you’re not stuck sitting in the rain for hours upon hours watching the hometown team let you down (not that I’m bitter or anything).

In all honesty though, the one thing that truly stands out when comparing the Capitals and the Redskins is the fact that the Caps care about the draft. General manager George McPhee has clearly put an emphasis on stockpiling draft picks and young talent, so, as a result, Boudreau can bench Tomas Fleischmann, the team’s second-line center, and his team doesn’t miss a beat.

There’s enough depth here that the Capitals have to selected skilled players to sit out. The Redskins, conversely, are so paper thin across the board that there’s no room for error. If someone is injured or going through a slump, there’s rarely anyone behind them on the depth chart to step in and pick up the slack.

Until Redskins general manager Bruce Allen follows suit and radically changes the mindset in Ashburn, the Redskins are unlikely to join the big boys. In the meantime, at least D.C. sports fans have the Caps. Otherwise, it’d be downright depressing around here these days.