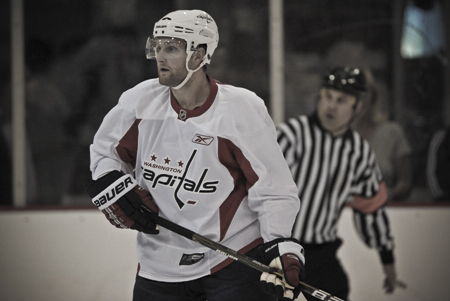 As a rookie during the 2008-09, defenseman Karl Alzner played 30 games for the Washington Capitals.

Last season, for whatever reason, Alzner took a step back and was called up to the National Hockey League for just 21 games. And while he saw action in just playoff game, it was during Game 7 against the Montreal Canadiens.

Alzner was paired with defenseman John Carlson during that game, and Caps coach Bruce Boudreau is on record as saying they were the best line on the ice for Washington that night.

Now, we’ve reached year three with Alzner in D.C., which is affectionately referred to on this blog as the “put up or shut up” year with professional athletes. I’m of the firm belief that, if you can’t definitively prove to your team in three seasons that you deserve a full-time roster spot, you’re wasting everyone’s time.

Fortunately for Alzner (and Caps fans begging for help along the blue line), it finally appears that he’s going to be given every opportunity to be a full-time member of the Capitals. With that in mind, I caught up with the quirky 21-year-old this week to see how everything is coming along.

Okay, I’m going to come right out and say it – this is the “Year of Alzner.” You’re here with the Capitals to stay and I’m expecting big things from you this season. What say you?

“I hope this is my year,” he said. “I know a lot of people have been saying things like that and I’m working as hard as I possibly can. I’m trying to do a little bit of everything in hopes of rounding out my game so that, when the time comes, I’m ready to step up and make plays.”

If I’m being honest, this time last year I thought you’d be a mainstay in Washington. Obviously that didn’t really happen, with you spending the bulk of your time in Hershey with the Bears. How do you look back on last season?

“It was disappointing for me,” Alzner said. “But I knew coming into camp that they had a lot of depth at defense and a lot of guys with one-way contracts, so it was going to be tough to beat one of them out. I know that the Washington Capitals organization likes to develop their players in the American Hockey League, which is good and I’ve benefitted a lot from it, but I was disappointed because I was hoping to play here more than I did. Looking back though, I really think I learned a lot about myself, about hockey and how to handle myself in tough situations.”

On the flip side, Hershey had another stellar year and ultimately won another Calder Cup. What was that experience like?

“Oh, it was great,” he said. “We had a great group of guys – pretty much the same team as the year before. We all got along and we all really enjoyed coming to the rink, practicing and playing together. You could really tell that we were always having fun and enjoyed being around each other. There was just a great chemistry with that group of guys and we got to go on a wild ride and it was a fun ride.”

How has your game evolved over the last year or so?

“I think I’m a more confident player out on the ice now,” Alzner said. “I’m not afraid to handle the puck for an extra second, if I have to. I’m not just looking to give it away and I’m not afraid to make an extra move to give myself more time and space to make a play, whereas before I’d always try to make the safest play. A good saying is ‘It’s not always the right play, but it’s never the wrong play,’ and that’s kind of how I was looking things. Now, I’m trying to jump up in the rush a little more and trying to play an all-around game.”

This past offseason Capitals general manager George McPhee opted to sit out of free agency and stick with what the team already had in place. What goes through your mind when you hear that?

“Well, you know, he’s said that for a while now,” he said. “I remember in my first or second camp, he said basically the same thing. He said, ‘We made the playoffs last year and we’ve got a good group of guys here that we’ve got to stick with.’ It’s nice to hear that he has that level of confidence in the players on this team. Now it’s on us. We’ve really got to step up to the plate and make sure we deliver.”

During one of our first conversations you told me that you never knew how long you were going to be in town for, so you didn’t keep any food in your refrigerator. You said if you made it to 5 p.m., you knew you were here for that night and you’d run out and grab dinner. Do you at least have food in your fridge now?

“No, not at all,” Alzner said with a laugh. “I’m a little superstitious, so I don’t want to get ahead of myself. There are a lot of guys who have been playing really well during camp and anyone could end up on the final roster. It all depends on who they decide to go with in crunch time. But I do hope it’s me so one day I can go grocery shopping.”

So you’re admitting to me that you’re living at Chipotle these days, huh?

“We go somewhere new every night,” he said. “All I have in my room is bread, peanut butter, Nutella and one knife. That’s it.”

And suddenly the lifestyle of a professional athlete doesn’t sound all that glamorous. Here’s hoping Alzner is officially here to stay and is able to stock up the kitchen sooner rather than later. Otherwise, I might have to start a food drive to get the poor kid something a little less pathetic on the menu.