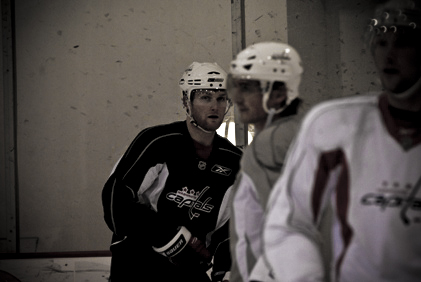 It’s impossible not to like Washington Capitals defenseman Karl Alzner. In addition to being a highly-touted prospect, Alzner is also the most bloggable personality on the Caps.

Well, the last time we spoke to him was last week when the front office had some tough decisions to make regarding the roster and the salary cap. With guys like forwards Tomas Fleischmann and Sergei Feredov getting healthy and returning to action, there was a very real chance that Alzner could have been sent down to the minors, not because of anything he’s done on the ice, but because of his salary cap number.

Fortunately for everyone involved, general manager George McPhee was able to get creative and find a work around meaning for the time being, Alzner remains in D.C.

We caught up with the talented rookie yesterday after practice to see how he’s handled all of the uncertainty.

The last time we chatted, 30 priests walked by us as they left the locker room. You were worried that you might get some bad news over the weekend. Did you pull one of the priests aside and have them put in a good word for you?

(Laughs). “I didn’t get a chance to,” Alzner said. “They escaped. But it seems like that’s what I did because I got a few more days right now. Maybe it was a little bit of good luck that they came by. Maybe they said something on their own.”

“Maybe, there’s a good chance they could have felt that,” he said.

The best quote from you last week was that now you get to go buy groceries. What’s your mindset these days? Are you living week-to-week or what?

“Lately it’s been day-to-day,” Alzner said. “We go to the grocery store at 4 o’clock every day and buy dinner. We don’t do anything else, in terms of food. Now I’m just trying to let it all go and relax. I’m going to try and live month by month, if I can. Maybe I can settle down and relax.”

Speaking of food, what are your plans today? Did we hear something about you and some teammates hitting up Chipotle after practice?

“Yeah, I’m having a little bit of burrito,” Alzner said. “I don’t know when, but I’m starving right now. I think if I start eating pretty soon, then I’ll be able to finish the whole thing. If not and I have a little snack, then I probably won’t be able to put it all down.”

How did the Chipotle trip come about?

“I’m not sure,” Alzner said. “Its a little promotion thing that they’ve got going on. Some fans won some contest where they get to have lunch with us. It’s fun for us. We get a burrito out of it and get to meet a couple fans.”

When’s the last time you got to eat junk food?

(Laughs) “Well, lately I’ve been eating it too much,” he said. “Every time we go to the movies or something like that it’s hard not to. It’s hard to resist the good selection that they’ve got. But I’m on a bit of a health kick right now, so I’ll make sure when I put in my order for the burrito that it’s chicken, rice and vegetables. That’s it. No guacamole. No nothing else.”

“To me, it still tastes good,” Alzner said. “It’s still a good thing.”

Well don’t let us hold you up. Enjoy your lunch and hopefully you’ll still be around this time next week.