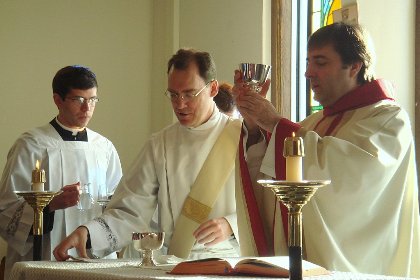 Just before the puck dropped and the Washington Capitals took on the Philadelphia Flyers, we found ourselves walking alongside Capitals general manager George McPhee as we headed towards our seat in a very crowded press box. Unable to pass up the opportunity, we asked GMGM a fairly simple question – do you have a good feeling about tonight’s game?

“I very seldom have anything other than butterflies,” was his reply.

What McPhee failed to mention at the time was that the Caps had a secret weapon in their corner.

As everyone knows by now, the Caps exacted a little revenge on the Flyers with a 2-1 shootout victory at the Verizon Center last night.

The Flyers came in to the game knowing that they can beat the Caps. They did it in the postseason last year and they did it again via beatdown last month. The Caps? Well, they might very well be one of the league’s elite, but there are still a few teams that seem to have their number. And clearly this Philadelphia squad has been one of them.

As fans headed out of the Phone Booth, many credited stellar goaltending by Jose Theodore as the reason the Capitals came out victorious. While it is true Theodore is playing the best he has since arriving in D.C., it appears the Caps also enlisted the help of a higher power Tuesday night.

While we were waiting near the Caps locker room to conduct an interview with defenseman Karl Alzner after the game, we witnessed something we can confidently say we’ve never seen before.

In addition to the various players and equipment managers shuffling up and down the hallway, there was George McPhee, who was followed by roughly 30 priests from the Institute of the Incarnate Word in Chillum, Maryland.

It turns out Raul Fernandez, a part owner of the Washington Capitals, invited these fine men to attend the game and get a little VIP tour of the facilities, which set the scene for the most bizarre and improbable moment in our young blogging career.

Imagine 30 priests huddled in the Capitals locker room, easily filling the room to near maximum capacity. Then, imagine Capitals superstar Alex Ovechkin coming out of the showers wearing nothing more than a towel. He heads to what would typically be an empty locker room only to discover the room has been temporarily taken over by holy men. What’s more, one of the priests is actually posing for a photo in front of Ovechkin’s locker … and wearing his helmet. Seriously, you can’t make this stuff up.

Right about then Alzner comes out as 30 priests shuffle out of the locker room and on their merry way.

Um … Karl, have you ever seen anything like that in a hockey locker room before?

“Never in my entire life, no,” he said pretty much in awe. “I think they might be a little upset if they heard some of the language that goes on in a locker room, but yeah, that was kind of interesting. I didn’t know anything like that was happening.”

So be honest, you guys are trying to win over The Big Guy for a run at the Stanley Cup, aren’t you?

“You know what, that’s not a bad idea,” he said, still laughing at what he just witnessed. “If that’s what they’re doing, then that’s pretty cool. That’s pretty cool for some of them to come see the game and visit the locker room like that. We’ll take any help we can get. That’s cool with me.”

If what we suspect is true and a higher power is indeed at play here, then we feel confident in telling fans everywhere to mortgage it all and bet the farm on the Capitals to win their first Stanley Cup in franchise history. We couldn’t just sit on this secret, for some reason we felt inclined to “spread the good word” and share this insider information. So unless you’re an atheist, or worse – a Devils fan – we highly suggest you take advantage of the situation while you still can. Just be sure to give back your tithes and offerings, or at least tip your bartender, when you win big.