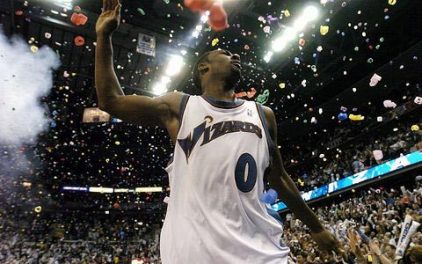 Now that LeBron-a-thon is over and the rest of the sports world can return to some semblance of normalcy, I thought it would be appropriate to take a moment for an impromptu state of the union address for the D.C. sports scene.

In no particular order, here are 10 thoughts on all of your favorite local sports franchises.

1. Strike while the iron is hot and trade Gilbert Arenas to Cleveland. Like, right this minute. Seriously. Do it.

My plan all along was to wait for the New York Knicks to fall flat on their face and miss out on the big-name free agents like LeBron James, Dwyane Wade, Chris Bosh, etc.

Unfortunately, Amare Stoudemire took the money and ran, which leads me to believe that the Knicks aren’t likely to be as desperate to acquiring someone with name recognition. Maybe if Isiah Thomas was still calling the shots it could happen, but I doubt that their new regime is in as much of a hurry to pull the trigger on an Arenas deal.

The Cavaliers just took the biggest stomach punch in the history of professional sports. Their chosen son just went on primetime television to break up with them. Honestly, it’s more disrespectful than anything Albert Haynesworth has done since he came to D.C.

But the more you think about it, the more it makes sense. The Cavs could swallow Arenas’ contract if they shipped the Wiz back Antawn Jamison and some spare parts. The Cavs are obviously reeling from this blindside hit – so much so that their owner, Dan Gilbert, guaranteed Cleveland will win an NBA title before James. His remarks reek of desperation, which is exactly what you want if you’re looking to unload someone with as much baggage as Gilbert.

So let’s get on the phone now and make it happen before they have a chance to even rebound. Do it for the kids.

2. While we’re at it, be sure the deal includes a sign and trade for center Zydrunas Ilgauskas. I’m pretty sure he still has his Wizards jersey from the last time he was traded here, so you’ve got that going for you. Which is nice.

3. Speaking of the Wizards, their roster is starting to take shape after Washington drafted John Wall and acquired combo guard Kirk Hinrich and disappointing forward Yi Jianlian via trade. But regardless of what happens with the artist formerly known as Agent Zero, they’ve still got some work to do this offseason.

Personally, I’d like to see them sign Josh Childress. Dude’s got some game and he’d be an upgrade over Nick Young or whoever else he’d be taking minutes from. The only issue seems to be that after a stint in Greece, Childress seems to be a highly sought after player. No worries. If the price tag is too high, then the Wiz should turn their attention to re-signing Josh Howard once he’s fully recovered from his knee injury.

Unfortunately, the Wizards renounced the rights to Howard this week, as well as Mike Miller and Randy Foye (you know, the two guys they traded away a top-five draft picks for one year ago). So yeah, general manager Ernie Grunfeld continues to make the job harder than it needs to be.

Is it too late to include Grunfeld in a package deal with Arenas to Cleveland as well?

4. Nice work by the Capitals to re-sign Boyd Gordon, Jeff Schultz and Eric Fehr without breaking the bank. Each players has a clearly defined role on the club and they’re all obviously players coach Bruce Boudreau feels comfortable with.

This is about the time that Tomas Fleischmann’s agent should realize that if he doesn’t get a little more realistic with his salary demands and sign something similar to what Fehr agreed to (a two-year contract worth $2.2 million per season), then his client might as well start packing up his belongings. Fleischmann is a nice guy and a serviceable player, but he’s also prone to vanish for months at a time. Sporadic production is not the Caps’ most pressing need, at the moment.

PS: Hey Capitals, while I’ve got your attention, we’re all still waiting for a second-line center and a stay-at-home defenseman. But you already knew that.

5. I’m already on record as saying the Nationals should re-sign Adam Dunn. Well, go ahead and lock up Josh Willingham too. Like Ryan Zimmerman said, any team worth a damn has solid hitters batting in the 3-4-5 spots.

6. While I’d rather not see the Nats become sellers at the trade deadline, I would welcome a trade of centerfielder Nyjer Morgan. Tony Plush might be fun for bloggers, but he’s not exactly the most consistent leadoff hitter in the game. If you run your mouth that much, I’d kind of sort of like to see a little more production.

Go ahead and move Morgan to make room in the lineup for Roger Bernadina to be an everyday player. I don’t know why, but I really like that kid.

7. Dear D.C. United, do something to make yourself noteworthy once again. Sign someone I’ve heard of. I long for the days when the bulk of the roster included name players such as Ben Olsen, Eddie Pope, Marco Etcheverry, Christian Gomez, etc.

It really would be wise to try and capitalize on the attention your sport is currently enjoying thanks to the World Cup. I’ve seen you guys in person once this season and you lost to an expansion team. Not fun times.

8. I mentioned Haynesworth earlier, so let’s take a moment to settle his situation. Here’s what the Redskins should do – nothing. No, I mean it. Don’t do a damn thing.

If/when the guy finally shows up, run his ass ragged in practice. And then, once Sunday rolls around, put him on the inactive list. He’s already collected $32 million for 12 months of “work,” and it’s readily apparent that the ‘Skins will have to get in line if they ever hope to get any of it back. That’s fine. It’s not like this is the first bad investment owner Daniel Snyder has ever made. He’s a big boy. He’ll survive.

But as far as I’m concerned, everyone else on that roster has put the time in this offseason and they’re all happily with the program. So reward them. Who cares how talented Haynesworth is? The Redskins are better off without him.

If you’re dead set on getting some coin back, then just let Fat Albert ride the bench until he comes around. Hell, you can even make a sideshow out of it and cart him out to the sidelines during games. He’s shown he’s in favor of cart rides from time to time, so let him enjoy it. He’ll be inactive anyway, so why not have a little fun with it anyway?

9. Cut Willie Parker and pass on Brian Westbrook. Nothing really more to add, other than I firmly believe that the “Porta-John” combo of Clinton Portis and Larry Johnson will be enough to move the chains for the team’s offense. Use the third spot for Ryan Torain and be done with it.

Yeah, yeah … I know he likely won’t be out of prison until 2011 as he serves out his two-year sentence for a weapons charge stemming from that time he accidentally shot himself at a New York nightclub. But let’s be honest here, Plaxico could show up at Redskins Park tomorrow and be a top-two receiver.

Even with a tracking bracelet on his ankle, he’d still do a better job of creating separation than most anyone else the team currently has. Joey Galloway? Child please. Bobby Wade? Redskins fans couldn’t identify him if he walked up to them wearing a Bobby Wade jersey. Mike Furrey? He couldn’t stick in Cleveland or Detroit – two teams that need all the help they can get.

Lawyer up and get Plaxico out for time served. Sign him to the same kind of low-risk, high-reward contract you inked Larry Johnson to and be done with it. This makes too much sense not to happen.