getting to know selvish capers 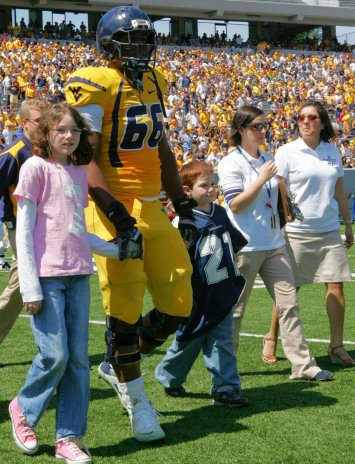 After neglecting the offensive line for more than a decade, the Washington Redskins have gone out of their way to make up for lost time this offseason.

The first sign that the front office’s philosophy had shifted came during free agency, when the Redskins signed a relatively obscure lineman named Artis Hicks. Then, the team completely shocked the world by using three of their six picks on offensive linemen.

With the fourth overall pick, the ‘Skins selected tackle Trent Williams out of Oklahoma, and then in the seventh round, the team nabbed New Mexico center Erik Cook with the 229th selection and West Virginia tackle Selvish Capers with the 331st pick.

Rounding out the impressive overhaul, the Redskins pulled off a trade with the New Orleans Saints for Pro Bowl tackle Jammal Brown.

Somewhere, future general manager Fred Smoot is crying tears of joy as the team finally realized that stockpiling “fat boys” is the way to go.

With so many new faces in the mix, I thought it’d be a good idea to chat with some of the new guys. Earlier this offseason, I chatted with Hicks. This time around, it was Capers.

For those who don’t know much about the rookie, he stands 6-4 and 304 lbs. He came to West Virginia as a tight end, but converted to the offensive line during his sophomore season.

Capers started at right tackle each of the last three seasons for the Mountaineers, protecting the blind side for their left-handed quarterback. The scouting report says he’s got a big frame and he’s very athletic, although he’ll have to bulk up to compete at the pro level.

“I really like it here,” Capers said of Washington. “I’m starting to get the offense down, because it’s totally different than what we did at West Virginia. The scheme is similar, but the plays, terminology and things like that are a whole lot different. I’m just trying to get into a rhythm and I’m hoping that all this hard work pays off.”

It’s not like West Virginia is on the other side of the country or anything, so how much did you know about the Redskins prior to the NFL draft?

“Not much at all,” he admitted. “I’m from New Orleans, Louisiana and grew up a big Saints fan. I pretty much started learning about the team once I got here.”

Well, it’s no secret that the offensive line has been a weakness for the Redskins in recent history, so you could actually see the field sooner here than with other teams. How important is it for you to get playing time in your rookie season?

“It’s not that important,” Capers said. “It’s important from a personal standpoint, but that all comes down to how the coaches feel. I’m just trying to get comfortable, learn as much about my position as possible and take it one step at a time. If I do all of that everything else will follow.”

For those fans who might not know that much about you, can you tell them a little bit about yourself and what you bring to the table?

“I have a lot of quickness, a lot of speed for an offensive lineman,” he said. “That’s what I’m known for – my feet. I have a lot of finesse, I guess you could say. I’m more of an athletic tackle, rather than some of the bigger, bulkier guys. I feel like I can move and I’m going to be bringing a lot of competition to the end of the line.”

Do you have a preference as to which side of the offensive line you play on in the NFL?

“Well, I was a right tackle at West Virginia, but now they’re playing me on the left side, so I’m just trying to get that down and get my rhythm,” he said.

How much is your head swimming as you try to absorb everything the coaches are throwing at you?

(Laughs.) “A whole lot,” Capers said. “It’s still spinning. Every time I step out there and try to make a play, I feel like I’m thinking too much. There’s just so much you have to think about, but once I finally get it all down and understand everything, it’s going to come to me a lot easier.”

Having an established professional like Chris Samuels around has to make the transition a little easier for you though, right?

“Yeah, he’s been a big help,” he said. “He’s out there every day and he’s definitely helping the rookies out. He’s helping everyone, including the older guys. I know for me, he’s definitely been a big help with some of the technical, fundamental things. I’m looking forward to working with him more down the road.”

What goals, if any, do you have set for yourself this season?

“I’m just going to take it all one day at a time,” Capers said. “I’m going to do the best I can every day, and like I said, everything else will build off of that. And if they need me, I’ll be ready. One hundred percent.”

It seems like everywhere you look, folks thought Capers would be drafted in the second or third round. I’ve got no clue why he was still available in the seventh round, but he could very well turn out to be a steal for the Redskins when it’s all said and done. Head coach Mike Shanahan has always favored a zone-blocking scheme with his offensive line, so having a big guy who is quick on his feet is a plus.

And best of all, there’s no need to rush Capers.

For the first time in a long, long time, the team actually has depth on the offensive line. They can afford to take their time with a guy like Capers and really let him get comfortable before throwing him into the fire.

That’s yet another reason why the new regime is so overwhelmingly loved and appreciated by the team’s fanbase. We might not have Smoot calling the shots, but it appears Bruce Allen might be the next best thing.