getting to know artis hicks 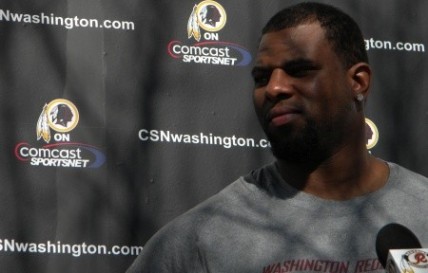 Admit it. When you’re a fan of the Washington Redskins, you’re used to the owner rolling out the red carpet to wine and dine top-end free agents like Albert Haynesworth.

Go big or go home, has always been the business model at Redskins Park. That’s just how they roll.

So it was kind of a culture shock when the biggest addition during the opening stages of free agency was some unheralded offensive lineman allegedly named Artis Hicks.

Sure, the offense was a joke last season and the line was one of the biggest offenders, but if you’re going to go that route wasn’t there an aging veteran with name recognition (like say, Orlando Pace) waiting for one last payday?

Nothing against the eight-year veteran, who stands 6-feet-4 and 335 lbs., but he’s not exactly the caliber of player who sells jerseys on a sub .500 football team (we say with tongue firmly planted in our cheek).

He’s not flashy, but Hicks might be exactly the kind of player the Redskins needs more of – a blue-collar worker who cares about nothing more than helping his team win on Sundays.

“Well, you know, I’m just trying to do whatever I’m asked,” Hicks said. “Right now, I’m at right tackle, so I’m trying to do my job and keep [quarterback] Donovan [McNabb] clean and open some holes for all these great running backs we’ve got here. It’s been fun getting to know these guys and trying to fit in. I’m looking forward to this season.”

You’ve been in the league a while now. Is there a particular position on the offensive line that you prefer to play?

“For me, it’s a matter of getting the work at whatever position they want me to line up at,” he said. “I’ve played four of the five – both guards and both tackles – so I’ve got the experience to play wherever. I’m not new to any of the positions, but there is some rust when you switch to a new role. That’s why this time of year is so great. During OTAs you can get out there and knock the rust off, move some guys around if need be and get a good feel for everything.”

If you’ve played four of the five positions on the offensive line, should we warn center Casey Rabach that you’re gunning for his spot to round out your resume?

“I’ll never be comfortable with a guy putting his hand on my behind,” Hicks said with a laugh.

It takes a special kind of man …

“That’s one position in football that I have no desire to play,” he continued. “I give a lot of respect to Casey and those centers … I just can’t do it.”

What was your opinion of the Washington Redskins before you joined the organization back in March?

“When I was growing up, you always heard about their offensive line, the Hogs,” he said. “I’ve always been an offensive lineman and I loved football growing up, so I always paid attention to what those guys did. There’s so much great tradition here and as soon as you walk in the front door you see those three Lombardi Trophies. They don’t just give those out. It takes a lot of hard work and a lot of sweat and tears to achieve something like that. Hopefully we can restore some of that great tradition.”

Let’s be honest, there aren’t a ton of highly-touted offensive lines throughout NFL history …

“Right. But I can tell you, most offensive linemen out there know about the Hogs and that they were what those old Redskins teams were really known for,” Hicks said. “They were big, physical, mean, nasty guys. It’s great having Chris Samuels here too because he spent his entire career with Joe Bugel and I still hear great stories about those days from Chris and Derrick Dockery. Bugel embodied what an offensive lineman’s mentality is all about. It’s great to hear stuff like that because it really gives you an invaluable perspective. And we’d love to get back to that – to make a name for ourselves like the Hogs.”

Obviously over the last few years, the offensive line in Washington hasn’t been as successful. Do you feel confident that the guys here now are capable of getting things back on track?

“Of course,” he said. “All of the guys here, except for [rookie left tackle] Trent [Williams] have experience. That goes a long way in the NFL. We’ve all been out there and we’ve all been in the battle. We know what it’s like out there and we know what to expect. I know they’ve had some tough luck with injuries and everything in the past and that’s huge. Up front, you really need continuity and consistency. That stuff matters most. If you don’t have the same starting five most of the year, it’s hard to get a good feel for how to work together to pick up blitzes or stunts. It just makes the job more difficult.”

Because injuries are a part of the game, a reasonable person would tend to believe that having someone as versatile as you on the roster is vital for the Redskins to be successful, right?

“I was told a long time ago that the more you can do, the longer you’ll play,” Hicks said. “I’m coming up on my ninth season and I feel blessed to have stuck around that long. Hopefully I can stick around and play at a high level for a few more years.”

To recap, Hicks is a team player who is willing to play anywhere his coaches ask him to if it helps the Redskins win. Oh, and he’s thrilled to be here because he dreams of achieving the same level of success that the Hogs did during his childhood.

He might not be a household name yet, but if he keeps talking like that, it’s only a matter of time before Hicks wins over the locals and becomes a fan favorite.