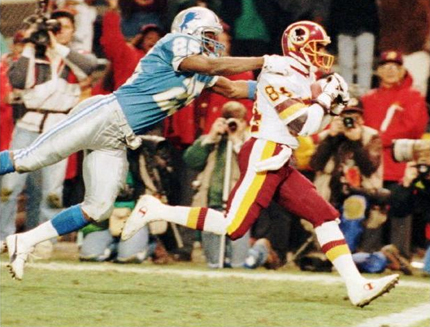 I’m going to come right out and say it – if the Washington Redskins invited only one former player to come out and address the current team this season, it has to be Gary Clark.

That’s because I had a chance to chat with the four-time Pro Bowler and two-time Super Bowl winning receiver during the team’s alumni day last week and, in all honesty, was ready to throw on pads and take the field after spending a few minutes with him. Clark has that type of an impact.

Like many others, he felt that this moment when the current regime and the old guard repaired their fractured relationship was a long time coming. But he’s more than ready to make up for lost time.

This has got to be a pretty special moment for you guys, being invited out to Redskins Park for an long overdue alumni day like this, right?

“Oh, it’s great,” Clark said. “When we first heard about their plan to bring in their alumni to coexist with the current team, a lot of the former players got excited. We’re Redskins in our blood until the day we die. As you can see from the turnout, this is something we all really care about – we care about the organization, we care about how the team is doing, but most of all, we care about those players out on the field. We care about how they carry themselves and how they perform and we’re looking forward to the season starting.”

Art Monk spoke of his early playing days and how a bunch of the older, retired players were always around Redskins Park. He said he hopes this is the first step in restoring that kind of relationship between current and former players. Is that something you’d also like to see around here?

“That’s exactly how it was when I first came here,” he said. “Former players were here in the locker room, in the weight room – they basically did everything but take the field during practice. But even then, they’d come out and watch practice so that they could give us pointers and honestly, they would give us trade secrets and tips from their playing days. Guys like Joe Washington were great about coming in and sharing their experience and offering tips to running backs and receivers. It was common courtesy when I came in.

As far as the current Redskins, how many of these guys do you know?

“I know Santana Moss, Chris Cooley, DeAngelo Hall,” Clark said. “I know some of the other guys who were here with Joe Gibbs, because I was fortunate enough to be asked to come back and talk to those guys. He was big on having some of us come back and interact with the fans and players. That’s how it’s supposed to be, man. Every day, back when we played, that’s what you’d see – 10 or 15 guys who used to play for the Redskins were out there watching us practice so they could share their knowledge of the game. I think it’s a good thing and it’s something that can only help the Redskins to continue with their rich tradition.”

How optimistic are you that this year’s team will be more successful than what we’ve seen over the last few seasons?

“I think they have a good opportunity to be successful,” he said. “They were in a lot of close games last year and I think this year you’ll see some leadership step up in that locker room. That’s the most important thing. Quite honestly, the front office and the coaches can only do so much. It’s the leadership that you get on that field that takes teams to the next level. By simply bringing in a Super Bowl-winning coach like Mike Shanahan, it brings in a certain swagger to your team that was lacking. He understands what it takes to win.

“When I first came to Washington, they had already won a Super Bowl,” Clark continued. “So the swagger and the expectations were already there. We knew we couldn’t come in half-stepping or we’d get cut. The players who were already in place let you know that this is what it takes and this is what we’re gonna do. The first thing they let us know was that in the NFC East, it was our job to go out there and spank that ass. That’s just how it was.”

You obviously still pay attention to the current Redskins. Do you think that the game or the current players have changed since your playing days?

“The game never changes,” Clark said. “I think some of the players have maybe changed. I’m sure that each time you get a new generation of players coming in, they bring a little something different. I think that’s possible. With us, it really had nothing to do with the money. We just went out with one mindset – winning is great. Losing sucks. It really was that simple. Guys from our generation hated to lose more than they loved to win. That was the biggest thing. I mean, I love winning, but I freaking hate losing. I hate losing with a passion. I didn’t want anyone to have bragging rights on me. I didn’t want anyone to be able to say ‘I kicked your butt.’

“These current guys, I’ve been around them enough to know that they really want to win, but I honestly don’t know if they hate losing yet,” Clark continued. “I think whatever leaders step up on this team, they need to show them that losing is not okay. They need to say we’re not in the sandlot. We’re not in high school. We’re not in college. Losing sucks. There’s nothing good about it.”

If those words aren’t enough to win you over, then you’re cheering for the wrong team.