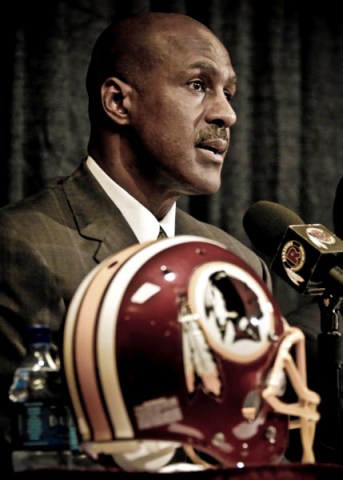 On the day Bruce Allen took over as vice president and general manager of the Washington Redskins, he made it a point to talk about the franchise’s rich and storied history.

Allen spoke of growing up a Redskins fan and admitted that this organization meant more to him than any other team in the National Football League.

Listening to him that day, it was easy to hear how much those “good old days” truly meant to him. And while Allen looked forward to the challenge of getting the franchise back to a championship level, he also said he wanted to create an environment in which those great players from yesterday were brought back into the fold.

Thursday, Allen took a big first step in the right direction, inviting more than 60 former Redskins players out to Redskins Park during minicamp for an alumni day. As simple as it sounds, having a bunch of old timers get together to shoot the breeze and watch a practice, it’s something that hasn’t been done since Daniel Snyder took over ownership of the team.

For many of the former players, this simple gesture meant more than we could ever imagine.

“This is great,” said Hall of Famer Art Monk. “To be able to come back, reminisce and tell old stories and see the guys you used to play with. You also get to meet some of the guys who played before you that you had only heard about. We’re a family, and it’s a shame that we haven’t been able to do something like this before.”

Talking with many of the alumni, it’s easy to see that they do feel like the Redskins are a family. Unfortunately, it’s been more of an estranged family over the last decade or so. How much did it mean to get that phone call from Bruce Allen to try and repair that relationship?

“It means a lot,” said Monk. “Talking with the guys, the general consensus is that we felt like orphans being kept outside the fence all these years. Now, to be able to reconnect with the team and the current players, I think is a good thing.

“You know, when I came to this team in 1980, the old guys were always around,” he continued. “Guys like Roy Jefferson and Charlie Taylor coached me and we really got to know them. We heard the stories about the amount of money they made or what they went through and I think it’s important for the current players to understand and appreciate what they now have. That’s been missing around here for a long time. Hopefully this is the beginning of something good.”

Obviously you and Donovan McNabb have the Syracuse connection. Do you have a relationship with any of the other current Redskins?

“I know a few of them here and there, but I haven’t really spent any time with them,” Monk said. “Again, it’s just been dealing with that separation thing and not feeling wanted here. So everybody just kind of kept their distance. Hopefully that’s not going to be the case anymore.”

As far as McNabb, have you had the chance to catch up with him since he joined the organization?

“Not a lot,” he said. “He’s been busy, but we’ve definitely chatted. He was obviously a little disappointed with the situation with Philadelphia, but he’s excited about being here. He’s committed to this team and we’re all excited to have him here. I think he’s going to bring a new level of leadership that we’ve been missing for a long time and hopefully we’ll see the results from it on the field.”

I’ll admit it, hearing Monk refer to the Redskins as “we” was awesome. He really does still feel a connection to the Redskins and it was readily apparent that he’s happy to be welcomed back at Redskins Park.

After practice concluded, the man who made this all possible spoke briefly with the media.

Allen was then asked why he felt the need to reach out to the former players.

“I don’t think it’s a need,” he said. “I think it’s the right thing. Obviously, many of these people are like family to me. We’re going to have an event this afternoon to incorporate our active players with our great alumni. I really feel this is a special time to be a Redskin.

“I was raised a Redskins fan,” Allen continued. “We owe them a great debt of gratitude for their accomplishments for building this game. Not just the three Super Bowl trophies, but the way they represented themselves in the burgundy and gold. I think they’re going to give great lessons for our current players to follow. We’re fortunate that we have such great alumni.”

While Allen was quick to deflect praise and focus the attention on the alumni, it has to be said that this never would have happened if Vinny Cerrato was still calling the shots.

“The first thing it means is that the change in the administration from Cerrato to Bruce Allen is a good thing for the Washington Redskins, because Vinny didn’t like us around,” said legendary Hog George Starke. “He didn’t like former Redskins. He wasn’t part of this family. And as a result of that, the Redskins never went anywhere. You know, [most] of these guys out there on that field have never been in the playoffs. On this side, you’ve got guys here with four rings.

“And so Bruce, when he came in, the first thing he did was he called Brig Owens up, he called me up, he said the Redskins will never be successful as an organization unless we all come together. He’s absolutely right. He says ‘I want everybody to come out, I want you to come out all the time, I want you to be part of the deal. Otherwise this team won’t be successful.’

“And that’s absolutely right. And that’s what he did, so that’s why we’re here. Whereas the Vinny guy was the exact opposite. He wanted to do it himself and he didn’t know how to do it.”

If those comments don’t give ‘Skins fans yet another reason to be thankful for the change in culture at Redskins Park, then nothing will.