the second coming of strasburg 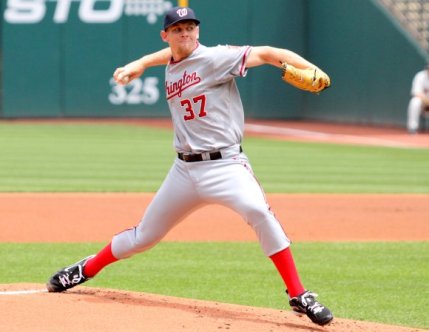 Since 2005, the Washington Nationals have been largely ignored, both locally and nationally.

Sure, it felt nice to have baseball back in our lives here in the nation’s capital, but fans largely stayed away, mostly because the team wasn’t very good.

When the “Natinals” did make headlines, they were rarely positive. Games were lost in bulk and missteps by management were far more common than any one fanbase should have to suffer though (just Google the words “Jim Bowden” and “Dominican scandal”).

But in the immortal words of OK Go, “All is not lost.”

The simple addition of pitcher Stephen Strasburg to a mediocre franchise like the Nats instantly makes it all better. Who cares if he only takes the mound once every five days?

Fair or unfair, if baseball is going to succeed in D.C., it’s going to be because of Strasburg. How’s that for putting the weight of the world on this 21-year-old’s shoulders?

After delivering one of the most dominating debuts in major league history, all anyone wanted to know is what would Strasburg do for an encore? Could he top his 14 strikeout, zero walk performance against the Pittsburgh Pirates? Or would he take a step back and look a little more human the second time around?

Whatever the outcome, one thing was for certain – all eyes were on Strasburg and the Nationals as they closed out their weekend series against the Cleveland Indians.

And for anyone thinking Strasburg’s surreal performance against Pittsburgh was a fluke, we’ve got bad news for you – the kid picked up right where he left off.

Strasburg struck out the first two Cleveland batters he faced. Coupled with the seven-straight Pirates he fanned to end his debut, Strasburg extended his strikeout streak to nine consecutive batters.

If that sounds impressive, it’s because it is. The major league record is 10, held by Tom Seaver and Eric Gagne.

From there, Strasburg cruised to an easy 9-4 victory over the Tribe. The rookie continued his winning ways, allowing just one run on two hits and striking out eight in five-and-a-third innings.

And for anyone who wondered if the radar gun was juiced at Nationals Park for Strasburg’s opener, his fastball continued to toy with batters on the road. Ten of Strasburg’s 95 pitches reached 100 miles per hour. Thirteen more clocked in at 99 miles per hour.

In two starts, the San Diego native has two wins and 22 strikeouts. He’s given up three runs on six hits in 12-and-a-third innings.

And here’s the kicker – in just two outings, Strasburg is already tied for eighth on the Nationals in strikeouts. In less than 13 innings of work, he’s already surpassed 11 other Washington pitchers and is currently tied with starter John Lannan (who has thrown 66 2/3 innings).

At some point, you’ve got to figure major league hitters will make adjustments. The more he’s around; the more video hitters will have to break down in hopes of finding any cracks or weaknesses in his game.

For now though, the only way it seems folks can throw the kid off his game is to put him on a faulty pitching mound. Strasburg had to call out the Indians’ grounds crew on two separate occasions Sunday to fix the dirt around the mound.

Much like everything else in Cleveland, the playing surface was disappointing. And the issue obviously affected Strasburg during the heat of the moment, as evident by the five walks he surrendered. Afterwards, the face of the franchise had cooled a bit and downplayed the issue’s impact on his performance.

“Things like that are part of the game,” he said. “I wish I could have handled it a little bit better. It kind of got me into a little funk, but it’s good to experience this now. If it happens again, I’ll make the right adjustment.”

Strasburg’s afternoon ended with one out in the sixth inning. The Nats led 6-1, but the Indians had loaded the bases and were threatening to make it a ballgame.

The top pick in the 2009 draft was replaced by Drew Storen, who was selected by Washington with the 10th pick in the same draft. Storen got Russell Branyan to pop up and struck out Jhonny Peralta to escape the sticky situation and the rest was history.

“When he’s put in a pressure situation, he’s going to come in there guns blazing, and he gets the job done,” Strasburg said of Storen. “Nothing really bothers him out there. Any sort of pressure doesn’t bother him.”

For all the times Storen has been asked by fans and media alike about Strasburg, it’s nice to see the roles reversed. It was also nice to see Strasburg’s teammates help him out of a jam the first time he faced a little adversity.

Sure, a dominant pitcher can make baseball much more enjoyable. But at the end of the day, it’s still a team sport and if the Nationals are going to become a competitive team on a nightly basis, they’re going to need more than just one starting pitcher. Even one as good as Strasburg.

“You see it when teams make trades,” he continued. “They get a big bopper in the lineup and everyone feels like, ‘Hey, we’re going to go win this thing now.’ I think our guys look at Stephen as, it’s like making a great trade in the middle of the season, to add a guy like this.”

It’s hard to argue that the rest of the lineup doesn’t have an extra hop in their step when Strasburg takes the mound. How else could you explain the Nats convincing 9-4 victory Sunday after dropping the first two games in Cleveland by a combined 14-3?

Not only does this guy make casual sports fans tune in, but he’s also so talented that his presence alone is enough to make his teammates also step up their game.

The second coming of Strasburg might not have been as dominant as his debut, but in truth – it was more satisfying. We got to see how the rookie handles himself in the face of adversity and the results were encouraging.

All in all, things continue to look better every day for the Washington Nationals. Now if they could just figure out how to get a few wins on nights when Strasburg isn’t pitching, they’d be in good shape.