this strasburg kid is pretty good 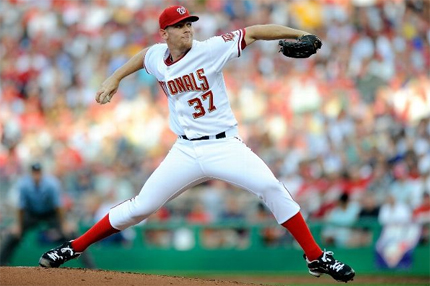 The statistics might say otherwise, but make no mistake about it – last night was the first perfect game in Washington Nationals history.

If possible, phenom Stephen Strasburg was even better than advertised as the Nats cruised to a 5-2 victory over the Pittsburgh Pirates in front of 40,315 at Nationals Park.

The anticipation of Strasburg’s debut was unlike anything we’ve ever seen in baseball. The hype, the national spotlight, the media circus. We’d seen it before with names like LeBron James or Alex Ovechkin, but never before in baseball.

A team that has been completely irrelevant since returning to D.C. in 2005 was suddenly thrust into the center of the baseball universe, thanks to Strasburg.

Who knows for sure what realistic expectations could be set for the 21-year-old’s first outing? Whatever they were, the player once referred to as the “greatest pitching prospect ever” might have actually surpassed them.

Against the Pirates, Strasburg was unreal. He established a Nationals single-season record with 14 strikeouts while allowing two runs on four hits with no walks in seven innings of work.

Strasburg’s 14 strikeouts are one shy of the all-time mark of 15 for most strikeouts in a major league debut and he matched a Nats record with seven consecutive strikeouts (whiffing the last seven batters he faced). No pitcher in baseball history has ever struck out so many batters without giving up a walk in his debut. No pitcher, except Strasburg.

“I’ve never seen anything like this. Never. Nothing close. Not at that age, that polished,” said Curt Schilling. And those comments from the former Boston pitcher came a month ago. Imagine what he’d say now.

By the time Strasburg’s night was over, we decided if the kid was playing a video game, it was already time to move up to a tougher difficulty level. This is why Nationals team president Stan Kasten joked over the weekend that Strasburg’s $15-million contract might end up being a bargain.

“He’s the only guy in baseball who lives up to all the stories you hear,” said fellow rookie pitcher Drew Storen.

We’re not here to bad-mouth the Pirates, but Strasburg simply toyed with them. Out of the 94 pitches he threw, only one was a bad pitch – a fourth-inning offering that Pirates outfielder Delwyn Young drove over the scoreboard for a two-run homer.

Of course, none of the 10 batters he faced after giving up Young’s homer actually reached base, so it’s safe to say Strasburg shook off the mistake pretty quickly.

His 94th and final pitch of the night – a fastball to Pirates third baseman Andy LaRoche – registered 99 miles-per-hour on the radar gun. The MASN broadcast actually listed one of Strasburg’s heaters at 103 miles-per-hour. Everything about this rookie is simply unfathomable.

If you didn’t understand why the baseball world revolved around Strasburg before he even threw his first big-league pitch, you do now.

“I really can’t put into words any better than what you saw,” said Nats manager Jim Riggleman. “It was very exciting with everything that was on him the last several days – for the way it was built up. For him to respond that way was a great night for baseball in Washington. That one is behind him and hopefully we could just get him on the routine and let him do his thing.”

While Strasburg isn’t a fan of the media or all the attention being thrust his way, it goes without saying that the world wanted to hear what he had to say after such a dominant debut.

“The only thing I really remember was the first pitch, and the ball was inside,” Strasburg said. “Everything else is such a blur. At one point I even lost track of how many innings I had. It’s kind of like getting married. You tell yourself you want to go out and remember everything, and once it’s done, you can’t remember anything.”

After his night was over, the crowd roared for the rookie – begging for a curtain call from D.C.’s newest power player. Eventually and begrudgingly, he obliged.

“It was a great atmosphere,” he said. “I definitely felt everyone pulling for me.”

And so did his teammates.

“I haven’t played before a crowd like that before,” said outfielder Josh Willingham. “The crowd wasn’t just yelling for a strikeout. They were yelling on almost every pitch. An absolutely really cool game to be a part of.”

From this point forward, the Nationals officially become must-see TV on nights when the San Diego native takes the mound. We’ve got no clue what sponsorship deals loom on the horizon for Strasburg, but if we could offer one suggestion it would be to sign a deal with Adidas.

If ever there was a poster child for their “Impossible is nothing” campaign, it’s this guy.