getting to know larry johnson 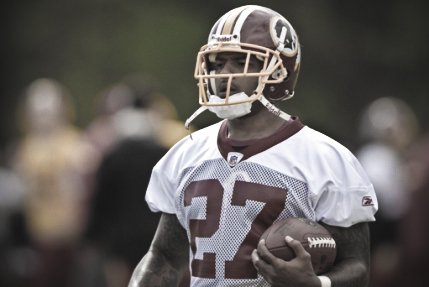 Our parents told us a long, long time ago that we should never judge a book by its proverbial cover.

And yet, there we were, criticizing the Washington Redskins for bringing in running back Larry Johnson before even taking the time to try and get to know the young man.

Well, we decided to try and rectify the situation by chatting with Johnson this week, if for no other reason than to get a better feel for someone who could very well be a central figure on our favorite football team this season.

While we didn’t necessarily have any expectations heading into the interview, we clearly walked away with a different opinion after spending some time with the 30-year-old. The same guy who came across as childish and immature when he called out his head coach on Twitter seems much more humble and hungry these days. If this is the Larry Johnson that the Redskins will see day in and day out, then it’s not impossible to believe he could be around a while. See for yourself.

How is the transition coming along as you adjust to your new team?

“It’s going really good,” Johnson said. “Everything, as far as moving and getting all my stuff here and learning a new city, a new town, it’s actually been easier than any other place I’ve been in. Everywhere I go, even when I’m out eating dinner, people are all telling me how happy there are to have me here. I really take that to heart because I’ve been in some cities where they didn’t want me there.”

On a personal level, this place holds a special meaning because your father played here, right?

“Definitely. And having family members all throughout Virginia, Maryland and the D.C. area makes it even more special,” he said. “It makes everything that much more fun because I didn’t have that kind of support in Kansas City. I was pretty much all by myself there, so it’s been really good to have all kinds of nephews and uncles and stuff around here.”

That’s one of the most overlooked aspects of professional sports. Young men are pulled away from college, where they’ve typically got their family and a certain level of comfort, and they can end up on the other side of the country in a place they’d never even think to visit if the circumstances were different. Are we wrong in thinking that there can be a pretty drastic adjustment period as a kid is asked to grow up essentially overnight?

“Absolutely, that’s true,” he said. “There’s a lot that you have to adjust to being by yourself, like the first time you have to pay a mortgage. It’s not like in college, where you just have to pay for meals, so it was definitely an adjustment. But coming here, it’s been easy. Just show me where to live and let’s go get started. It’s been that easy and it’s been fun, and knowing Coach [Mike] Shanahan’s history and reputation makes it even more exciting to be here.”

You mentioned Kansas City, but we’re curious how you look back on your time last season in Cincinnati.

“It was fun, but it was very brief,” Johnson said. “I wish I could have stayed with those guys a little bit longer and actually gotten to know them a little bit better than I did in those six or seven games. The entire experience was enjoyable and being in a playoff game and seeing those guys finally take it to the new level was very cool.”

As an outsider, it looked like you went there and kind of got your mojo back. It seems you were able to put all the off-field stuff to the side and turn your focus to simply playing football. Is that how you see it?

“It was making the best out of a bad situation,” he said. “Being able to go to a new city and having the coach there welcome me with open arms let me just go out there and play football. I had a chance to just go out and demonstrate what I could do, so I was thankful for that.”

Football isn’t played in shorts and a lot can happen between now and the season opener, but you really look comfortable out there these days.

“Yeah, like I said, when you’re happy and you’re in good surroundings and you feel comfortable because you like being where you’re at, it makes everything better,” Johnson said. “It makes you work harder. It makes you more competitive. It just makes the entire situation better.”

With you, Clinton Portis and Willie Parker, there are a lot of well-known names in the backfield and there’s plenty of skeptics who believe it can’t work having all of you around. How are you guys handling the situation?

“We’re all competitive and we leave it all on the football field,” he said. “Maybe one of those guys doesn’t make it and maybe we can’t all start every week. We just go out there and let our work ethic and stuff like that show what we can do. If you’re a history buff, the only other three big-name running backs that played together were Joe Perry, Hugh EcElhenny and John Henry Johnson back in the day in San Francisco and they did awesome.

“Will it work here? You never know,” Johnson continued. “Everybody wants to go with two backs or use third-down backs. There’s nothing wrong with having three backs going out there and pounding away because that’s what this offense is about.”

What goals do you have for yourself this year?

“Just to play,” he said. “I just want to go out there and try to play as best I can. I want to end things on a positive note after all I’ve been through off the field. I just want to continue playing football and let my work on the field speak for itself.”

For the last several seasons, the Redskins have been an above average team on defense and not-so-great on offense. With guys like you and Donovan McNabb coming to town, a lot of fans are hoping that can finally change. As one of the guys putting in the work every day, do you think the potential is there for this team to finally have an offense that can score points consistently?

“I really think so,” Johnson said. “We’re all really enthusiastic and guys like Donovan are really competitors. It really seems like everyone on the offense is looking to be that guy this year. We’re all looking to better our reputations on the football field and a lot of us feel like we’ve got something to prove. We’ve got some guys who are in their 30’s or guys coming in from other teams for one reason or another and we all feel like we want to prove the critics wrong.”

Whether he’s talking about the lessons he learned from his playing days in Kansas City or dropping knowledge about the 49ers “Million Dollar Backfield,” Johnson clearly is someone who acknowledges the past while looking ahead to the future.

We’d be ignorant if we proclaimed he was a new man just because he’s stood out during a few minicamp practices or because he’s kept a low profile off the field in the few months he’s been in D.C., but all of this suggests the book hasn’t been written yet on Johnson.

No one knows for sure how this chapter will play out, but it’s easily one of the biggest subplots as the Redskins head into a highly-anticipated 2010 season.