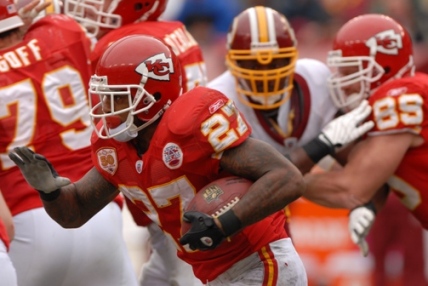 Is there a less likeable backfield in the NFL today than Clinton Portis and Larry Johnson?

Both running backs head into next season with huge question marks hanging over their head (namely, does either guy have anything left in the tank?), each player is fully capable of making headlines for all the wrong reasons and neither will ever be in the running for “most popular teammate.” But other than that, things are great in Ashburn these days.

So yeah, that’s where we’re at. The last time Portis was brought up, it was because his teammates had finally grown tired of his selfish ways and spoke out against him. It seems that after years of thinking he was above the law or that he wasn’t held to the same standard as the rest of the Redskins players, Portis’ act had finally set off his teammates.

“With Clinton, it’s not a big secret. Everybody knows he doesn’t practice,” said a teammate who asked that his name be withheld. “And then he fires off on someone. You’ve heard people say, ‘Well that’s just C.P. being C.P.’ So what? Does that excuse him for his actions? It shouldn’t. It shouldn’t because there are 53 guys on the squad. Why should one man be different?”

For those keeping score at home, the breaking point in this situation seemed to be if you’re out of the lineup and rarely even bother to show up at your place of work, then you probably shouldn’t badmouth the guys who are there every day putting in the time and effort. Sounds reasonable, right?

But that didn’t stop Portis from running his mouth about Redskins quarterback Jason Campbell on the radio and, honestly, it’s not like this was an isolated instance. Even on his way out the door, backup running back Rock Cartwright couldn’t help but question Portis.

“They never really took care of the guys that put all the hard work in, worked every day, practiced every day,” Cartwright said. “I remember there were times when there wasn’t nobody practicing but Ladell Betts and I, because C.P. didn’t want to practice. So it was just Ladell Betts and I practicing day in and day out. And then they expect you to go out and perform on Sunday, and when you do go out and perform on Sunday, they never reward you.”

Now, you’re adding Johnson to the equation, and you’re not going to believe this, but drama apparently follows this guy wherever he goes as well.

Things started back in 2004 when Kansas City Chiefs coach Dick Vermeil told Johnson to “take the diapers off” in response to what the coach perceived was a casual approach toward preparation. Instead of taking the hint that maybe he should work harder if he wanted to see the playing field more often, Johnson got pissy.

“my father got more creditentials than most of these pro coaches. … google my father!!!!!!!

We’ll point out that Johnson’s father is former Redskins player Larry Johnson, Sr. and try our best to ignore the seven exclamation marks and spelling errors. Johnson wasn’t done yet.

This “logic” would ask you to forget that Haley was coaching in the Super Bowl one season earlier as a member of the Arizona Cardinals staff. You probably also should forget that the younger Johnson has played a full 16-game season just twice and has been on a winning team just twice since he came into the league in 2003.

It’s safe to assume that we aren’t the only ones to question Johnson’s “logic,” because as soon as he posted this nonsense, fans lined up to call him out. And as history dictates, Johnson doesn’t do well with anyone who has an opinion that differs from him. Here’s a screen capture of what transpired next: 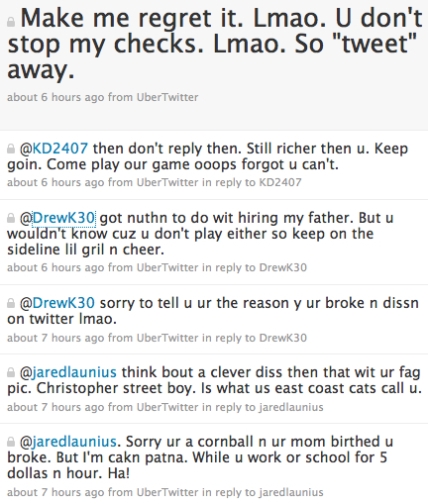 To recap, Johnson’s official stance seems to be – “if you disagree with me, you are a homosexual. And yes, I mean homosexual in an offensive way.” Amazingly, this was deemed inappropriate by the Chiefs, who cut ties to Johnson shortly thereafter.

Johnson finished the season out in Cincinnati and behaved, mostly because the team was winning and if he had any hope of ever getting another contract, he needed to straighten out. But that doesn’t mean that the rest of 2009 was quiet for Johnson.

In addition to alienating his team and spouting off intolerant slurs, Johnson also managed to plead guilty to two counts of disturbing the peace for separate incidents involving women.

The first incident occurred last February, when a 26-year-old woman accused Johnson of pushing her head at a Kansas City nightspot.

That’s better than the second incident, in which Johnson was accused of spitting a drink in the face of a 24-year-old woman and threatening to kill her boyfriend at another Kansas City club last October.

Seriously, what’s not to like about this guy? Why wouldn’t the Redskins want to build a team around him?

In our humble opinion, two of the most underrated aspects of building a team are character and chemistry. Call us naïve, but we would rather our favorite team search out quality blue-collar players who are willing to sacrifice for the good of the team rather than me-first assholes who are incapable of thinking of anything or anyone else.

It’s why we’ll never root for Terrell Owens. Or Deion Sanders. Or countless others. Anyone quoted as saying, “I love me some me,” is not someone we’d care to see representing our hometown. Add in off-the-field drama and more than one run-in with the law, and we openly begin to question why any team would even bother with the guy. And that’s without even factoring in just how flawed the current Redskins roster is.

No one knows for sure if Portis and/or Johnson has anything left in the tank. No one knows how long we have until the next outburst or “foot-in-mouth” moment. And yet, this is what we, as Redskins fans, are left to root for.

Maybe Portis will fail to impress the new regime and earn a pink slip before the season starts. Maybe Johnson will call his daddy and ask him to beat up Mike Shanahan because he felt slighted once again. Maybe the running backs will become the next Brendan Haywood and Etan Thomas and come to blows every time the insecure duo crosses the same path.

Ladies and gentlemen, your 2010 Washington Redskins!