teammates tired of the portis drama 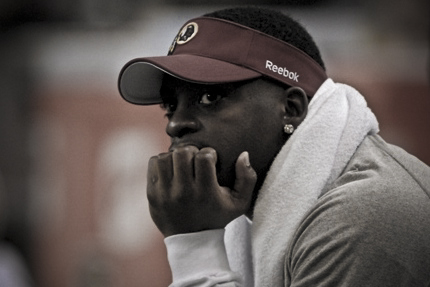 It’s almost like Clinton Portis can’t help himself. He sees Washington Wizards guard Gilbert Arenas or his former coach Mike Shanahan stealing all of the local headlines and can’t help but try to stir up drama to get some attention back on him.

During his weekly segment with John Thompson, the Washington Redskins running back had some not-so-flattering comments in regards to quarterback Jason Campbell.

“I think Jason, you can’t place so much on somebody who’s not ready for that situation,” Portis continued. “I think Jason has enough trouble in getting the plays in and worrying about this, compared to controlling the huddle and making sure, ‘Oh, we do this and we do that.’

Well, once word got out that Portis had badmouthed one of his teammates, you can guess how happy other Redskins were with the diva running back.

“Clinton can be one of the elite running backs in this league,” said a teammate who asked that his name be withheld. “I mean, he has definitely shown that throughout his career. But as you get older, you can’t just not practice and think you’re going to perform on Sunday. That’s not how the game goes. Plus, with the uncertainty with the offensive line this year, he got frustrated and said some things about how we’re not running the ball well and about the blocking. Sometimes you’ve got to look at yourself. Even though the guys were banged up and a lot of other guys had to come in, they all practiced. They practiced their butts off. They may not have been the best talent money can buy, but you can be damned sure they’re going to give you everything they’ve got. You can rely on that.

“And for C.P. to fire off on Jason, that’s not right. He’s always out there at practice,” he continued. “Lord knows he took some hits. He took some hits to the point where I thought he was done for the year, but the thing about him is, he rose up like a man and kept on taking it. That shows a lot of integrity on his part and we’re very thankful for that.”

We’re glad to hear that Campbell’s effort didn’t go unnoticed by his teammates. Turning back to Portis though, there have been rumors for a long time about him getting special treatment …

“With Clinton, it’s not a big secret. Everybody knows he doesn’t practice,” the player said. “And then he fires off on someone. You’ve heard people say, ‘Well that’s just C.P. being C.P.’ So what? Does that excuse him for his actions? It shouldn’t. It shouldn’t because there are 53 guys on the squad. Why should one man be different?”

At that point we suggested that maybe, with the team about to name a new head coach, this would be the ideal time to remove any locker room distractions in hopes of getting everyone else on the same page as the team tries to rebound from this 4-12 disaster.

“Yeah, for sure,” he said. “I’m sure they’ll evaluate that. There are guys you can rely on when it comes to winning. I was talking to one of the guys this week about how you look at chemistry on a team like the Pittsburgh Steelers – they don’t have many big-name superstars. They come to work on time and they show up ready to play. That’s what football is really about. You don’t need big stars. You just need guys to put their egos aside and to be there when you need to count on them to get it done. I’m sure they’ll focus on that because honestly, we don’t need that distraction. The media will run with that and then it will become an even bigger deal.”

We then asked what players think when they hear one of their teammates is running to the owner in an attempt to circumvent the coach’s authority.

“We don’t need that,” he said. “You can’t do that. You’re making yourself an individual. Why should you be special? That’s one thing I’ve never understood – why does one man feel like he’s above everybody else? That’s not right. You’re undermining your coach. Whether you like the man or not, you’ve got to show a level of respect. For you to go over the coach’s head and go to the owner – that’s really childish. It’s like having two parents and saying to dad, ‘Mom said I couldn’t do this, but can I anyway?’ You just can’t do that.”

At that point, we were able to get another player to share his take on the situation, as long as we promised to also withhold his name.

“I thought it was bad,” he said in regards to Portis’ comments on Campbell. “I mean, he ain’t even been in the huddle. I think Jason is doing the best he can with what he’s working with. He had an offensive line that was banged up and beat up, and I think he handled the situation really well. I think it’s bad when you throw Jason under the bus like that when he’s out there giving it everything he’s got. I’ve never seen that huddle in disarray. I’ve seen coaches on the sideline not getting the plays in on time and having to call a timeout, but I’ve never seen Jason panic or anything like that.”

We heard from more than a few players that the week after the Atlanta game was the best week of practice this team had all season long simply because one huge distraction wasn’t around.

“Yeah, yeah, I heard that too. I heard a lot of guys say that,” he said. “Honestly, several players said that the offense ran more efficiently because he wasn’t there. Lots of guys were talking about how much better the offense was without him. And when you’ve got guys saying stuff like that, there’s something wrong.

“Clinton’s always been the type of guy to speak freely and say what’s on his mind, but I think he’s got to be ready when it comes back at him,” he continued. “Jason can’t just sit around and keep taking that. Not when he’s out there every day and we’re talking about guys who aren’t even out there with him most of the year.”

So let us ask you – is this team better off without Portis and all of these continued distractions?

“Any team would be better off without it,” he said. “You can’t just go around throwing people under the bus. If it wasn’t Mike Sellers about missing blocks and trying to get him pulled from the game, it’s always something else. Every time you feel like things aren’t going your way you feel like you’ve got to go to the media or on the radio? That’s just got to stop. This team already has enough distractions. We need everyone to be able to focus and just play football. Last year, it was all that stuff with B-Mitch [former Redskins star Brian Mitchell]. It’s just always something with him.”

“You’ve got guys who fought through adversity all season long and he wasn’t even there,” he said. “He didn’t come to meetings. He wasn’t on the sideline with us when we were going through these rough times. And if he did come, he left by the third quarter. You never saw him around the facility or anywhere. For him to go out and throw Jason under the bus, what kind of teammate are you?”

You can’t ask Redskins players to be any more clear than that. They’ve dealt with Portis and his tiresome act long enough.

Here’s the thing – since his first day in burgundy and gold, Portis has been one of our favorite players. Hell, we liked him enough to use his likeness in our banner at the top of our website. But we simply cannot get behind a player who continually puts himself above his team and throws his teammates under the bus just so he has something to talk about during a weekly radio segment.

When healthy, Portis is clearly one of the top 10 running backs in the NFL. But at this point, we can’t help but think it might be best for everyone involved if the next time Portis takes the field, he’s wearing a different team’s jersey.