the caps and free agency 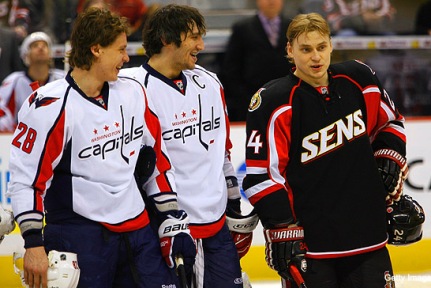 Now that the Washington Capitals’ season has come to an abrupt end and the locals have begun to settle down as the shock of the disappointing opening-round loss to the Montreal Canadiens fades away, it’s time to look ahead to next year and beyond.

The beautiful thing about the Capitals is that the core of this franchise is young – with 13 players on the final roster 26 or younger. And because Capitals general manager George McPhee and owner Ted Leonsis are smart, the bulk of the players on the roster are signed to short-term deals.

In fact, Capitals captain Alex Ovechkin still has a decade or so on his current contract and fourth-line center David Steckel is signed through 2012-13. Everyone else currently on the roster is signed for two years or less, giving the team tremendous financial flexibility moving forward.

Today we’re taking a look at which players are set to become free agents and taking a stab at who should be back and who might want to contact their preferred real estate agent this summer.

Name: Nicklas Backstrom
Position: center
Age: 22
‘09-10 stats: 82 games played, 33 goals, 68 assists, 101 points
3-year average: 82 games played, 23 goals, 63 assists, 86 points
Outlook: Backstrom was one of just four players in the NHL this season to eclipse the 100-point mark. Since the other three players in that category (Vancouver’s Henrik Sedin, Pittsburgh’s Sidney Crosby and Ovechkin) are all finalists for the Hart Trophy, as the league’s most valuable player, it’s safe to say the 22-year-old Swede has reached elite status (even if the rest of the NHL continues to underrate Backstrom).

Backstrom has never missed a game since joining the Caps and his goals, assists, points, plus/minus and shooting percentage have improved each of his three seasons. Basically, the Capitals would be insane to let Backstrom go anywhere and they know it, so expect news of a new contract to be announced in the not-too-distant future.

No one knows for sure what kind of contract Backstrom will net, but it’s safe to assume it’ll be somewhere between $7-7.5 million per year. But if that’s what it takes to lock up this top-line center for at least five or six years, then so be it. He’s clearly a superbly talented kid who the front office can feel comfortable building the franchise around.

Name: Eric Fehr
Position: right wing
Age: 24
‘09-10 stats: 69 games played, 21 goals, 18 assists, 39 points
3-year average: 51 games played, 11 goals, 12 assists, 23 points
Outlook: We’ve got a confession to make. Two or three years ago, we didn’t care much for Fehr. The Capitals used the 18th overall pick in the 2003 NHL draft on him and we felt he should be more of an impact player like Anaheim’s Ryan Getzlaf, Vancouver’s Ryan Kesler and Philadelphia’s Mike Richards – all players the Caps passed up to draft Fehr.

We saw two 50-goal seasons during Fehr’s time in the minors and couldn’t wait for his arrival in Washington. Sadly, he scored a grand total of six goals in his first three seasons in D.C. and we nearly gave up on the pride of Winkler, Manitoba. Thankfully, McPhee has more patience than we do.

Fehr’s salary this season was $771,750, which would seem to be a bargain for a 24-year-old who scores 20 goals a year. Let’s say through arbitration, Fehr’s salary were to double. He’d still only make $1.5 million (which is what Brendan Morrison earned this year). Something in the range of $1.5-2.5 million sounds fair to us.

Name: Tomas Fleischmann
Position: wing/center
Age: 25
‘09-10 stats: 69 games played, 23 goals, 28 assists, 51 points
3-year average: 72 game played, 17 goals, 22 assists, 39 points
Outlook: No player on this list will be tougher to figure out than Fleischmann. With 23 goals and 28 assists for 51 points in 69 regular-season games, the 25-year-old definitely put up respectable numbers this year for the Caps.

Everyone who follows the Capitals know that forward Alexander Semin is so afraid of contact that he goes out of his way to avoid going to the net or digging the puck out of the corners. Does Fleischmann fall into the same category and we just hadn’t noticed it before now? It’s tough to say.

Like Fehr, Fleischmann is also eligible for arbitration. This season, he took home $725,000, which is the same salary as fourth-line center David Steckel. Now, here’s the million-dollar question: let’s say McPhee has to choose between Fleischmann and Fehr. The former racked up 13 more points in the regular season, but was nonexistent in the playoffs. The latter was one of the few bright spots for Washington against Montreal. If there’s not room for both, it’ll be interesting to see which player stays and which one is shown the door.

Name: Boyd Gordon
Position: center
Age: 26
‘09-10 stats: 36 games played, 4 goals, 6 assists, 10 points
3-year average: 55 games played, 5 goals, 8 assists, 13 points
Outlook: Back problems limited Gordon to 36 games this season, which is too bad because Gordon definitely provides a skill set that the Capitals benefit from when he’s healthy. Gordon is solid on faceoffs and excels on the penalty kill. Feel free to take a look at the team’s pitiful numbers when down a man and think how much worse they’d be without Gordon in the rotation.

If Gordon is willing to sign in the $1.5-1.75 million ballpark, then the Caps would be wise to lock him up for a while. If he’s looking for a much larger payday, then he should call the New York Rangers.

Name: Jeff Schultz
Position: defenseman
Age: 24
‘09-10 stats: 73 games played, 3 goals, 20 assists, 23 points
3-year average: 69 games played, 3 goals, 14 assists, 17 points
Outlook: Jeff “Freaking” Schultz led the NHL with a plus/minus rating of 50. Seriously, how improbable is that? Aside from Backstrom, no other free-agent-to-be should see a larger increase in salary than Schultz. That’s what happens when a player earning $715,000 finishes the season as a league leader in an important statistical category.

Schultz isn’t an offensive juggernaut. He isn’t the second coming of Scott Stevens, forcing all opposing players to look twice before crossing the blue line. He’s simply quietly effective. For that reason alone, we figure the Capitals will find a way to make Schultz happy without breaking the bank.

Name: Eric Belanger
Position: center
Age: 32
‘09-10 stats: 17 games played, 2 goals, 4 assists, 6 points (with Washington)
‘09-10 stats: 60 games played, 13 goals, 22 assists, 35 points (with Minnesota)
3-year average: 77 games played, 13 goals, 24 assists, 37 points
Outlook: Belanger is good, but not great. He’s solid on faceoffs and like Gordon, is very good at killing penalties. He’s also such a good team player that he can lose seven teeth and still make it back onto the ice for his next shift. He’s already said he’d like to stay in Washington, but whether or not that happens will depend largely on what salary demands he makes.

Belanger earned $1.75 this season. If he’s willing to stay under the $2 million mark to leave room for then he could return. If not, then he’ll likely be elsewhere next season.

Name: Brendan Morrison
Position: center
Age: 34
‘09-10 stats: 74 games played, 12 goals, 30 assists, 42 points
3-year average: 64 games played, 12 goals, 20 assists, 32 points
Outlook: Morrison played very well in small spurts. Unfortunately, he also went long stretches without bringing much of anything to the table. His $1.5 million salary this season was reasonable, but his output is easily replaceable. Basically what we’re saying is, we’d be surprised if Morrison was still in town this time next year.

Name: Shaone Morrisonn
Position: defenseman
Age: 27
‘09-10 stats: 68 games played, 1 goal, 11 assists, 12 points
3-year average: 72 games played, 1 goal, 10 assists, 11 points
Outlook: Morrisonn is a very solid player and is one of the few players on this team who is willing and able to get physical with the opposition. The problem is, he’s 27 and likely looking for a sizeable raise. We’re not sure how much higher (Morrisonn made $1.975 million this season) the Capitals can go.

With McPhee already saying that John Carlson and Karl Alzner will be mainstays on the blue line for Washington next year, it wouldn’t be shocking if the team let Morrisonn go to make room for the highly-skilled duo.

He’s a likeable guy and a consummate professional, but the truth is that Theodore makes too much money to keep around. His $4.5 million salary was fourth highest on the Caps this season (behind only Ovechkin, Semin and Mike Green). That’s a luxury this team cannot afford; not with Semyon Varlamov, Michal Neuvirth and even Braden Holtby all waiting in the wings.

The seven-year veteran is everything a team could ever dream of in terms of a defensive defenseman. Since the NHL began keeping blocked shots as a stat in 2005-06, Volchenkov has blocked 1,023. That’s 120 more than anyone else in professional hockey. And he’s Russian. Aren’t the Caps Mother Russia’s favorite team anyway? That’s reason enough for us to sign him.

In a game against Washington back in February, Volchenkov had 11 blocked shots. The Caps, as a team, had four. So yeah, this guy would definitely fill a void. It’s tough to say how much a player as talented as Volchenkov will command on the open market, but if we were McPhee for a day, we’d find a way to sign the 28-year-old. Even if it meant moving a talented player such as Semin or Green to make room for him.

This postseason showed the Capitals need to make some adjustments. They might not need to radically overhaul their roster, but they would be wise to target a player like Volchenkov who would teach the rest of the Caps that it’s okay to take pride in defense. Not since Dikembe Mutumbo has there been an athlete this gifted at shot blocking.

If the Caps make just one move this offseason (after resigning Backstrom, of course), please let it be signing Volchenkov. Anything after that is a bonus.