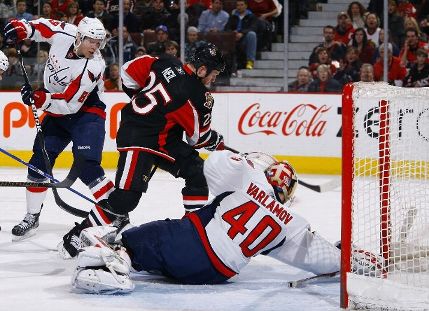 After enjoying the best stretch of hockey in franchise history the Washington Capitals have come crashing back down to earth, dropping two-straight games north of the border.

Their most recent loss, a 6-5 barnburner to the Ottawa Senators, looking eerily familiar to anyone who has been paying attention to the Caps up-and-down play of late. With that in mind, we present to you 10 topics of conversation following the team’s latest collapse.

1. The Capitals have now allowed the opposition to score first in 10 of their last 15 games. Yes, they routinely battle back and tie things up later in the game, but wouldn’t it be nice to actually get off to a better start and not have to play catch up?

It used to be that the Caps had trouble with early-afternoon games because several of the guys like to sleep in and it took them time to get going. These days it doesn’t matter what time the game starts, the Caps allow their opponent to strike first and don’t get going until either late in the second or early in the third period.

We’re all for entertaining “firewagon hockey,” but we’d be remiss if we didn’t point out that the Caps can still pick up two points without ratcheting up the degree of difficulty just for the hell of it. At this point, we’d love to see the Capitals come out Saturday against St. Louis and do something they haven’t been able to accomplish in recent history — start strong and cruise to an easy victory while playing a full 60 minutes of disciplined hockey.

2. It’s a good thing the Olympic break is right around the corner. Between injuries and sloppy play, the Capitals are in need of some alone time. Jason Chimera, Tom Poti, Shaone Morrisonn and Michal Neuvirth are all out of the lineup due to various ailments, and it’s a safe bet other players are dealing with nagging injuries as well. While Alex Ovechkin, Alexander Semin, Nicklas Backstrom and Semyon Varlamov head to Vancouver in the quest for gold, the rest of the roster would do wise to take it easy and get healthy for the second half of the season.

3. Speaking of Varlamov, he returned to action for the first time since December and, unfortunately, it showed. Varlamov, who had been shelved for the last two months due to knee and groin injuries, stopped just 22 of 28 shots he faced against Ottawa and let in more than a few he’d like to have back.

After the game, coach Bruce Boudreau had strong words for his young netminder.

No goalie likes to get beat five hole. It happened twice to Varlamov.

“When you say he’s rusty or whatever; that’s an excuse, and excuses can’t be tolerated. One goal went right through the legs. He’s been making that save since he was seven years old,” Boudreau said.

Chances are Varlamov won’t see much action for the Russian National Team. If that’s the case, he’d be wise to spend his free time on the ice working himself back into playing shape. Varlamov was 12-1-1 prior to the Senators game. It goes without saying, Varlamov returning to form can go a long way towards helping his club come playoff time.

4. We hope rookie defenseman John Carlson didn’t watch the Senators game. Because, if he did, he can’t be happy watching Tyler Sloan and John Erskine “play defense.” Sloan was on the ice for three Ottawa goals. Erskine for two. Varlamov didn’t have his best game of the season, but this game could have been even worse if he didn’t come up big several times covering for the Erskine-Sloan combo.

It’s unfortunate that the NHL is set up in a way that guys like Karl Alzner and Carlson are relegated to the minor leagues in favor of lesser players simply because they don’t have to pass through waivers. Maybe if Erskine and Sloan weren’t on the same line it wouldn’t have been as noticeable, but watching them pretend to be traffic cones while Senator players skated circles around them only re-enforced what we already knew — better players are forced out of the lineup for reasons that have nothing to do with on-ice abilities.

5. While we single out Sloan and Erskine for their poor play, we’d be remiss if we didn’t point out that the Capitals as a whole, have work to be done in their defensive end. In the last five games, the Caps have allowed 23 goals. Sixteen of those goals have come in the last three games. That’s fine if you’re in Atlanta, where no one actually watches hockey, but not so much if you consider yourself a legitimate Stanley Cup contender.

“It was an ugly display,” Boudreau said. “I thought our defense was horrible and our goaltending was horrible. You’re not going to win when you give up six goals and maybe five of them are bad ones and our “D” can’t make a play. It’s awful.”

Just this week we wrote that this team, as presently constructed, is capable of winning it all. Well, being capable of and actually making it happen are two totally different stories. Either Boudreau and friends need to really crack down on players and start holding playing time over their heads until they’re accountable for their erratic play in their own zone or general manager George McPhee really might need to bring in a veteran presence to remind the rest of the team how vital sound defensive play is during the postseason.

6. Senators defenseman Anton Volchenkov blocks more shots than Dikembe Mutumbo in his prime. We highly doubt that the Senators would ever let go of such a valuable commodity, but if McPhee does feel the need to strengthen his blue line, he’d be wise to inquire about the availability of Volchenkov. The 27-year-old finished the game with 11 blocked shots and honestly stopped more of Ovechkin’s shots than Senators goalie Brian Elliott did Thursday night. Considering the Caps had just four blocked shots as a team, it’s safe to say that Volchenkov would provide a skill set that this team is lacking.

7. After a week or so of “Bad Sasha,” Semin reminded everyone why he’s in line for a big pay day down the road. Sure, he’s great at taking offensive zone penalties and excels at questionable decision making, but he’s also got one of the best wrist shots in the NHL. Semin scored twice in less than a minute during the second period and could have had another goal on the same shift as well. He finished the game with a hat trick, the team’s third in as many game (which is yet another franchise mark during a season when seemingly half of the record book has been re-written).

The funny thing is, even when Semin got going in the second period, you couldn’t help but wonder why we don’t see that kind of effort from him more often. Comcast Sportnet announcer Craig Laughlin, might be a bigger homer than we are, but even he suggested that Semin was missing in action during the first period. It’s sad that even on nights when Semin is playing like one of the league’s elite forwards, you can’t help but wonder how long it will last. It’s almost like a safety mechanism to guard against his next boneheaded decision or ill-advised penalty.

8. We mentioned that Semin pulled off the hat trick one game after Brooks Laich’s first career three-goal night and after Ovechkin earned the Caps’ first hat trick of the season. Well, NHL teams who have a player record a hat trick are a staggering 49-2-1 this season. Two of those three losses have come within the last 48 hours … both by the Capitals. Not good times.

9. Brendan Morrison is in such a slump that he should legitimately consider following in the footsteps of Pedro Cerrano and turn to Jobu for help. Not only has Morrison scored just two goals in his last 33 games, but he’s also developed a knack for taking penalties and has struggled in the faceoff circle of late.

Again, when we wrote that this team can make things happen come playoff time we’re banking on guys like Morrison to contribute. Either he needs to figure things out and get something going when he’s on the ice or Boudreau should consider cutting into his playing time even more.

10. The top line in hockey – Ovechkin, Backstrom and Mike Knuble – has been outstanding during the winning streak, but none of the three had much of an impact in Ottawa. Ovechkin finished with just one assist on the night, had eight shots blocked and admitted he felt fatigued against the Senators. Backstrom and Knuble were held pointless and neither made much of a difference Thursday.

There’s no need to break up the highly productive line and no one in their right mind expected the trio to continue putting up points at a break-neck pace, but they’re so rarely kept off the scoreboard that we felt obligated to mention it.