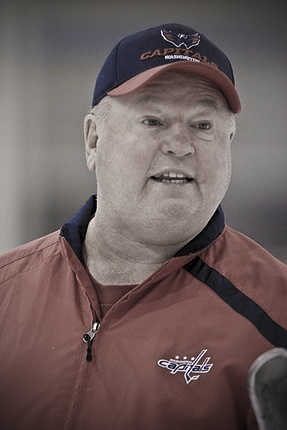 You might not believe this, but Bruce Boudreau knows more about hockey than we do.

Shockingly, we came to this conclusion during the second period of Game 4 as the Montreal Canadiens turned up the heat on the Washington Capitals and spent the bulk of the frame on the offensive as they peppered 21 shots on net.

The only reason the Habs didn’t explode for four goals in the middle stanza like the Caps did one game earlier was because of the stellar play by netminder Semyon Varlamov.

If not for the 21-year-old’s repeated robbery with his catching glove, the series would now be tied at two games a piece. Fortunately for Caps fans, Boudreau is the coach and not us, which means Washington is now one game away from Round 2 after a convincing 6-3 win in Montreal.

You might remember that Capitals goalie Jose Theodore was yanked from Game 2 after allowing two goals on the only two shots he faced. With the Caps already trailing in their opening-round series, Boudreau didn’t feel like there was time to wait for Theodore to get his act together, so for the second postseason in a row, Jose was benched.

You might also recall that we firmly believed Boudreau HAD to go back to Theodore, if for no other reason than to show he still had faith in his veteran goaltender. Upon further review, maybe we’ve seen too many sports movies, where a down-on-his-luck veteran battles back against all odds to an improbable victory.

Maybe the thought of everything Theodore has faced in his personal life or the fact that he had a chance to face his former team was too much of a juicy storyline for us to resist. But the reason those kinds of subplots make for such an enjoyable movie-going experience is because life rarely plays out that way. If it did, then there’d be no need to go see Miracle, The Blind Side or any other Hollywood production.

What we’ve finally learned is that Boudreau clearly doesn’t get attached to a goaltender. Think back to when he first took over the Capitals. The team stunk and was in need of major upgrades across the board. Caps owner Ted Leonsis and general manager George McPhee openly spoke of the plan to get younger and of building their franchise “the right way.”

While everyone agreed it was a necessary change, fans still had a fit when long-time Capitals such as forward Peter Bondra and goalie Olaf Kolzig were shown the door. It was as if we were saying, “We like your plan in theory, but can’t you make these two exceptions?”

We all watched Kolzig’s diminishing play in net and gave him a pass because of everything he’d done on and off the ice for his team and his city. It didn’t matter that Kolzig was no longer the goalie who could backstop a run at the Stanley Cup. He was a local icon, so he deserved the rose-colored glasses treatment.

Boudreau, who had only been around for a matter of minutes, wasn’t nearly as attached to the situation, so if he felt someone other than Kolzig gave his team the best chance to win, he played someone else.

It wasn’t pretty (for Caps fans), but it worked. And the same holds true now with Theodore. He might have made for the heart-warming story, but he wasn’t the goalie who Boudreau felt would ultimately provide the Capitals with a happy ending.

The results speak for themselves. Varlamov didn’t look great in relief of Theodore in Game 2, allowing three goals on 22 shots (.864 save percentage). But since then, he’s been lights out.

For the series, Varlamov is 3-0 with a 2.24 goals against average and a .920 save percentage. He’s been so electric in net, that his play has woken up the previously sluggish Capitals’ offense.

In the last three games, the Capitals have 17 goals. It doesn’t matter who lines up against the Capitals, they’re not going to be able to match goal for goal against the league’s highest-scoring offense.

We were among the vocal majority who believed turning to Varlamov meant turning your back on Theodore, and that in all likelihood, once Jose was benched, the free-agent-to-be wouldn’t play again for the Capitals. Again, upon further review, we can’t help but think we were being a little overly dramatic.

Theodore is a professional. He’s been in the league for 12 years now and should Varlamov struggle again at some point this postseason, Jose will have no problem returning to action. History shows that Boudreau won’t hesitate to make the switch again if Varlamov falters. Varly knows it. Theo knows it. And now, we know it too.

And if we’re going out of our way to compliment Boudreau, there’s also the case of Capitals center Boyd Gordon. The fourth-line forward was in and out of the lineup for a chunk of the second half of the season due to back issues. And although Gordon was in the lineup for Game 1, he found himself saddled with a “did not play: coach’s decision” for Game 2.

Whether Boudreau was trying to send Gordon a message or simply playing a hunch that someone else in the lineup deserved the playing time is up for debate. Either way you spin it, Gordon has done nothing but excel since he returned to action.

We’ve already covered Montreal’s dominance in the second period of Game 4. Through the first 40 minutes, the Canadiens outshot the Capitals 33-18. The Habs were clearly the better team through two periods, but with six seconds left in the middle frame, forward Mike Knuble scored a momentum-shifting shorthanded goal to tie things up at 2-2.

No one can question that Boudreau has his finger on this team’s pulse. He often admits to playing a hunch, and time and time again those hunches prove to work. If the Capitals are able to eliminate Montreal and continue their postseason run, it will be largely in thanks to Boudreau playing his hunches and making those tough decisions.

He’s done nothing but win since he came into our lives, so let us say one final time – we’re sorry for ever doubting you, Gabby.