who will be in net for game 3 for caps? 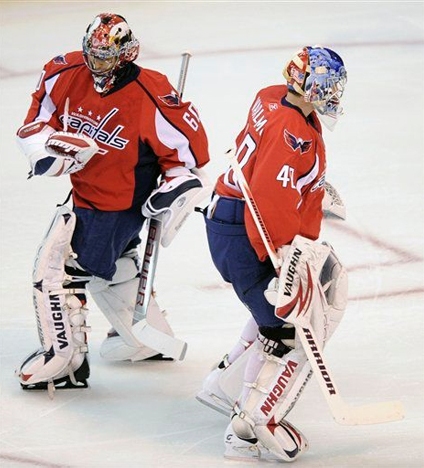 Admit it, when the Washington Capitals were down 4-1 midway through Game 2 against the Montreal Canadiens, you thought they were done. Honestly, you might have even thought all hope was lost.

Capitals goalie Jose Theodore giving up two goals on the only two shots he faced was the worst possible start for the goalie and the Caps.

Couple that with the offense’s apparent decision to settle for long-range shots with little presence around Canadiens goalie Jaroslav Halak and no one would blame you for thinking the worst – for the second time in as many seasons the Caps were about to give away home-ice advantage and go down two games to none against a lesser opponent in the opening round of the playoffs.

No one will blame you. No one will think less of you (unless, of course, you’re one of the “fans” who threw trash onto the ice during the game. You gentlemen, can burn in hell, or worse, become Penguins fans.)

After all, there wasn’t much reason for you to think things would get better … unless, of course, you’ve seen the Capitals play this season.

While Capitals coach Bruce Boudreau and Caps fans with a weak heart might prefer the team to cut down on the degree of difficulty, they’re actually pretty damned good when they find themselves in such a precarious situation.

For those who aren’t aware, the Capitals actually had the best winning percentage in the NHL of teams trailing after two periods (.364). More than any other team in hockey, the Caps find a way to win games without playing a full 60 minutes.

When forward Eric Fehr scored on a 30-foot blast halfway through the first period, Capitals superstar Alex Ovechkin said he noticed something. It had nothing to do with how the goal was set up by a great outlet pass by forward Tomas Fleischmann or where Fehr beat Halak (blocker side). No, the Capitals captain picked up on something after the goal was scored that stood out to him.

“I watched the replay when Fehr scored the goal and his arm was like shaking when he drank water,” Ovechkin said of Halak after the game. “So, he’s nervous. He knows all the pressure is on him and that’s a good sign for us.”

You ever hear what happens when a shark senses blood in the water? Yeah, that’s a fitting comparison.

Unfortunately, things had to get worse before they could get better for the Capitals.

Canadiens forward Andrei Kostitsyn picked up his second and third goals of the game and as we said at the top, the Caps were down 4-1.

Here’s why the game changed – the Capitals, led by their top line of Ovechkin, center Nicklas Backstrom and wing Mike Knuble – decided to focus on finishing their checks and crashing the net.

Halak looked completely uncomfortable as players continually bumped into him and did their best to screen his view of the puck. On Backstrom’s first goal of the night it was Knuble who played the pest, cutting through the crease to initiate just enough contact with Halak to throw him off.

Speaking of Backstrom, he’s easily been the best player on the ice for either team during the first two games. Coming into the series, he was probably the least heralded 100-point scorer in the NHL. Everyone talks about Ovechkin or Pittsburgh’s Sidney Crosby or even Vancouver’s Henrik Sedin, but a lot of what Backstrom does gets overshadowed by Ovechkin.

He’s strong as an ox, which makes him tougher than you might think to move off of the puck. He’s a gifted passer with vision Redskins quarterback Jason Campbell can only dream of. He’s above-average in the faceoff circle and more than happy to rack up assists while teammates finish the play, but make no mistake about it – Backstrom can score goals too.

His hat trick in Game 2 marked just the seventh time in franchise history that a Capitals player scored three goals in a playoff game. But even without the goal scoring, Backstrom is having the kind of breakout performance that the Caps needed.

As the top-line center was playing his best game as a member of the Capitals, Ovechkin began to get his mojo back too. Ovechkin finished the night with one goal and three assists for four points and eight hits in a complete effort that he and his teammates sorely needed.

And let’s not forget the continued emergence of defenseman John “Captain America” Carlson. Not only did he score the first postseason goal of his career, but if you go back and watch the play again, you’ll see that he actually called for the puck way back when the Caps began to bring the puck out of their own defensive zone.

Basically, dude called his own shot, like he was Babe Ruth or something. He wanted the puck and as soon as he got it from Backstrom, he showed what he could do with it. Like we said on Twitter after the game, someone needs to get Carlson a real jersey number, because he’s here to stay.

Thanks to a rededication to the basics (finishing their checks and crashing the net), the Capitals are back in this series. They have yet to play a complete game as the series shifts to Montreal, but they’re at least on even footing heading into Game 3 tonight.

Varlamov was given a baptism by fire last postseason, when Boudreau felt compelled to bench Theodore against the New York Rangers in the opening round of the playoffs. The untested rookie was key in helping the Caps battle back to defeat the Rangers in seven games and was lights out in six of the seven games against the Penguins (before falling apart in Game 7).

A year later, he’s ready and able to do it again. And the most sobering statistic involving Theodore is this: he has been pulled from four of his last seven postseason starts.

And yet, we firmly believe that when the puck drops in Montreal Monday night, Theodore should be between the pipes for Washington.

The numbers don’t back it up and Theodore doesn’t exactly have a great track record in the postseason or even against his former team, but we just feel you’ve got to give the 12-year veteran one final chance to show what he’s got.

If Boudreau goes with Varlamov, then he’s all but admitting he’s lost faith in Theodore. He might say otherwise, but actions speak louder than words.

Theodore and his 30 wins this season where a big reason why the Capitals reached new heights this year, and we’ve got a gut feeling, that if he’s given one final chance, he’s not going to disappoint.

We could be completely wrong and Theodore could just as easily play his way out of town with another stinker tonight. But we’re hoping Boudreau goes with the veteran one more time and that Theodore, sensing just how much is at stake for him and for his team, makes the most of it.