how to make it in america, caps edition 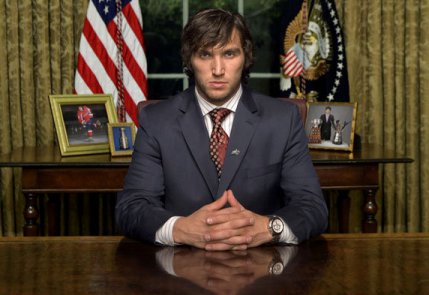 Tonight officially kicks off the Washington Capitals quest for immortality … or at least the right to sit at the grown-ups table.

Since 1974, the Caps have been a likeable bunch. But they’ve also been fairly harmless. If that perception is to change, it’s going to have to start tonight as the Capitals host the storied Montreal Canadiens in the opening round of the Stanley Cup playoffs.

From a historical perspective, these two teams shouldn’t even be included in the same discussion. The Canadiens, with more than 100 years of hockey tradition and 24 Stanley Cup championships to their name, are the industry standard. Conversely, the Caps claim to fame is being swept in 1998 by Detroit in the finals. So yeah … these two teams are from different planets.

Today is the first day of the rest of your life … or at least your postseason life. The Caps have continued to steadily improve over the last few seasons and if that streak is to continue, they’re going to have to make it through, at a minimum, to the Eastern Conference Finals. Honestly though, with the way this season has played out, most folks around town won’t be happy unless this team is one of the last two standing.

That’s because the Game 7 loss to Pittsburgh a year ago has clearly left a feeling of unfinished business with both the team and Caps fans. Everyone knows what the Capitals are capable of, but ask the San Jose Sharks what “being capable of” gets you in the playoffs. Talent alone doesn’t cut it.

With that in mind, here are the five keys to a prolonged postseason run for the Capitals:

1. Spotlight on the secondary.

The Capitals scored an average of 3.82 goals per game, easily tops in the NHL, and forward Alex Ovechkin finished with at least 50 goals in a season for the fourth time in five seasons. But goals are much harder to come by in the postseason. Teams play tighter and coaches are less likely to take chances, so one mistake can truly spell disaster.

For the Capitals to survive in the playoffs, goals need to be scored by players not named Ovechkin.

Handsome forward Brooks Laich paced the Capitals with three goals and two assists for five points against Montreal this season. Defenseman Mike Green and forward Tomas Fleishmann each had a goal and four assists versus the Canadiens. Forward Eric Fehr had four goals in four games against the Habs. This is a good thing.

Hockey, unlike basketball, is a team sport. Staying on the ice for more than a minute is considered a long shift, so there’s only so much time Ovechkin can be in the game. The season finale – a 4-3 shootout loss to Boston – showed what happens when the team stops playing Caps hockey and starts forcing pucks to the captain.

Ovechkin had a chance to claim the goal and point scoring titles with a strong final outing. Obviously his teammates knew this and wanted to do everything in their power to help him get there. Unfortunately, the Caps looked disjointed, lacked their typical offensive flow and Ovechkin missed out on both fronts.

In the playoffs, personal achievements are meaningless. There’s only one thing that matters. The Capitals know this, but they also better know that getting there is going to take more than Ovechkin – even if he’s widely considered the best player in the game today.

As you’ve no doubt read here and countless other places, all eyes are on Washington goalie Jose Theodore as the Caps head into the playoffs. Sure, he’s one of only a handful of goalies to win 30 games in each of the last two seasons, but what did that get him last year?

Benched (or “the best seat in the house,” if you’re an eternal optimist). Theodore struggled early and often against the New York Rangers, forcing coach Bruce Boudreau to turn to an unproven Semyon Varlamov.

This year, Theodore has his shot at redemption. He’s gone 20-0-3 since early January and has easily played some of the best hockey of his impressive career. But the knock on Theodore is that when the postseason starts and the lights get brighter, he wilts under the pressure.

No player is more vital to the Capitals than Theodore. If he plays well, this could be a memorable journey. If he falters, the Caps could be home sooner than expected and Theodore could find himself on a new team next season.

All season long we’ve joked about the split personalities of Capitals forward Alexander Semin. Good Sasha, as we dubbed him, is one of the most gifted players in the NHL. He plays a beautiful brand of hockey and has a lethal wristshot that even an elite player like Ovechkin simply cannot match.

But there’s also Bad Sasha. He’s the dude that gets caught up in the bullshit and takes ill-advised penalties in the offensive zone at the absolute worst-possible times. Selfish penalties away from the play are his calling card. In related news, he’s also the guy who ensures Boudreau remains bald and does little to help the rest of the coaching staff sleep at night.

The Caps need Good Sasha. Or, at a minimum, they need Semin and friends to stay out of the penalty box as much as possible. Which brings us to our next point …

Suck less on the penalty kill.

Okay, we’re all friends here. No need to beat around the bush, right? The idea to let fans come up with their very own song to be a part of the Verizon Center experience is exactly the kind of grassroots mentality that makes the Caps so enjoyable.

The tone starts with owner Ted Leonsis giving out his email address to fans to encourage a healthy dialog rarely seen in professional sports and trickles down throughout the entire organization. Having fans participate in a create-a-song gimmick is simply an extension of the same mindset.

But the new “Rock the Red” song is bad. Like, really bad. We’re not hating on [insert name of fan who came up with the song here], we’re just saying it was a case of “good intentions, bad execution.”

The Caps went 30-5-6 at the Verizon Center this season and will now enjoy home-ice advantage for as long as their postseason lasts. Capitals players often talk about the electric atmosphere for home games these days and how it truly helps fire them up on the ice.

Well, anyone who has attended a game at The Phone Booth since this new goal song debuted will admit that it’s been received with mixed reviews (to put it kindly). Even the Caps seem to be getting away from it – sprinkling in other tunes, such as Chelsea Dagger, recently.

Let’s take it one step further. Kill the song. Eliminate it completely and turn to a new jam. Our vote goes to “How You Like Me Now?” by The Heavy, but we’re not picky.

The Capitals easily have the best gameday experience in town. Their in-game videos are always well done and gameday presentations are equally enjoyable. Other than one dud of a song and the cost of adult beverages, there’s very little to complain about at the Verizon Center.

So you’ve got two choices – either you kill the “Rock the Red” song or you lower the price of beer to help us drown out the poor man’s Def Leppard imitation. Caps fans will be happy either way.