against montreal, all eyes on theodore 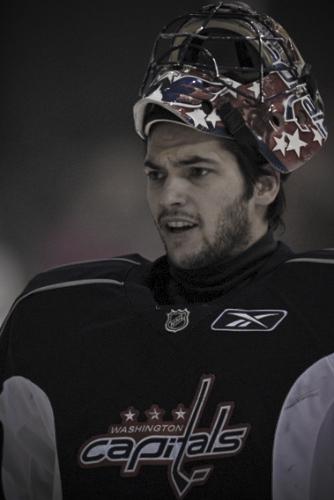 Washington Capitals coach Bruce Boudreau has yet to name his starting goalie heading into the playoffs.

While D.C. awaits a formal announcement, let us spoil the surprise – unless something shocking happens in the next few days, goalie Jose Theodore will be in net for the Capitals in their opening-round series against the Montreal Canadiens.

All season long, Theodore has been the Caps most steady and reliable option in net. Heading into the final year of his contract, Caps fans thought that Theodore would be relegated to back-up by either Semyon Varlamov or Michal Neuvirth, but that hasn’t been the case.

Theodore beat out the highly-touted duo by a large margin, going 30-7-7 this season, with a 2.81 goals against average and a .911 save percentage. While Neuvirth and Varlamov have both been prone to the occasional bad outings and/or soft goals, Theodore has been rock-solid seemingly all season long.

By now you’ve heard that Theodore has gone an insane 20-0-3 over his last 24 starts. Well, please allow us to journey back to just before this improbable streak began in an attempt to put everything in perspective for you.

Neuvirth started in net for the Caps’ 7-4 loss to Tampa Bay, Jan. 12. He was far from spectacular on this day, and pulled from the game after allowing four goals in just 15 shots (which averages out to 12 goals against average and a meager .733 save percentage).

Theodore was thrust into action and put up solid numbers considering just how well everything was clicking for the Lightning that day (Tampa Bay was firing on all cylanders that day, going four for seven on the powerplay). Theodore allowed three goals on 21 shots through two periods in mop-up duty, but was tagged with the loss.

We bring this up, not to dwell on the negative, but to point out that this was the only regulation defeat Theodore suffered in 2010. The 33-year-old has a sparkling 21-1-3 record with a 2.42 goals against average and a .920 save percentage since New Year’s Day.

If the record doesn’t win you over because you’re convinced any goalie would win on a high-powered offensive-juggernaut like the Caps, then let us make one more case for Theodore: since that loss to the Lightning, he’s been nearly unbeatable when the game is on the line. Theodore has given up just nine goals on 229 shots in the third period since Jan. 13.

We’re not sure what the official hockey-critic definition of clutch is, but a statistic like that would seem to clearly indicate that Theodore falls into that category. Anyone who can’t see that should probably watch less hockey and spend more time watching Jimmy Fallon or Jay Leno.

Along the same lines, Theodore has posted a 14-2-4 record with a 3.10 goals against average and a .901 save percentage at the Verizon Center this season. Having home-ice advantage throughout the postseason is actually meaningful if you have a goalie who actually capitalizes on the situation.

Theodore also went 26-5-5 with a 2.76 record and .911 save percentage against the Eastern Conference this year. So to recap, he wins at home. He wins against the conference. Basically, in 2010, if you play Theodore, you’ve given yourself an above-average chance for a win.

That being said, Theodore has admittedly had limited success against his former team – posting a 2-1-1 record with a 4.05 goals against average and a .877 save percentage against Montreal since being traded in 2006. To be fair, it should be noted that one of his two wins against the Canadiens was a shutout.

Interestingly enough, while we can’t be certain, it seems that Boudreau went out of his way to avoid playing Theodore against Montreal this season.

In four games against the Habs this season, Varlamov started twice and Neuvirth got the other two starts for the Capitals. The only action Theodore saw against the Canadiens this year was after Neuvirth got benched in a 6-5 overtime loss at Montreal. Theodore allowed four goals on 25 shots in relief against his former employer, but otherwise, was repeatedly given the night off when the Caps and Canadiens got together.

Does this perceived reluctance by Boudreau indicate a lack of confidence in Theodore or was it more a situation where the coach was protecting one of his most-important players from having to face an understandably emotional situation?

No one knows for sure and it’s safe to assume Boudreau won’t be divulging his thoughts on the subject heading into Round 1 of the playoffs Thursday.

But here’s our official stance on Theodore – dude has been lights out all season long. After struggling against the New York Rangers in the opening round of the playoffs one season ago, Theodore has rededicated himself to his craft. Even with two amazingly-talented prospects breathing down his back and gunning for his job, Theodore has risen to the challenge.

We fully realize that regular-season success means nothing once the playoffs begin and that Theodore is just 19-27 lifetime in the postseason. But Theodore has absolutely earned the right to be in net when Game 1 gets underway Thursday night at the Verizon Center.

And we’ll take things even one step further – should Theodore play well during what Caps fans hope will be an extended playoff run, he absolutely deserves a new contract to remain in Washington.

Sure, it won’t be overly popular with the chunk of the fanbase anxious to see just how good Varlamov and Neuvirth can be, but if Theodore continues to play at such a high level, the team would be foolish to let him walk away.

Capitals general manager has shown more than enough patience with highly-talented prospects such as Karl Alzner and John Carlson; allowing lesser-skilled players such as John Erskine and Tyler Sloan to see more playing time than the team’s top two prospects.

Well, Theodore certainly brings more to the table than Erskine or Sloan. If he’s able to ride this hot streak a while longer, Theodore should absolutely be given the opportunity to return to Washington – even if it delays the eventual changing of the guard to either Varlamov or Neuvirth.