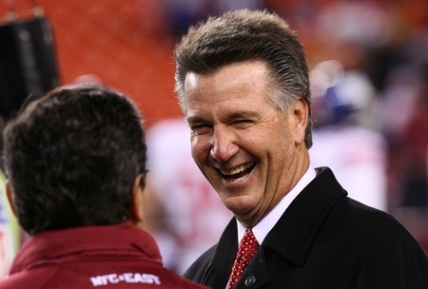 While we made it perfectly clear earlier this week that we aren’t exactly thrilled that running back Larry Johnson is now a member of the Washington Redskins, there is one aspect of the signing we have no issue with.

The three-year deal that Johnson inked was worth just $3.5 million, although he could make as much as $12 million total with incentives.

In the past, the Redskins front office basically handed out five-year, $25-million contracts like candy. Seriously, free agents didn’t even have to visit Ashburn for a chance at a big pay day. They could simply have a connecting flight through Dulles and Vinny Cerrato would happily stand by at baggage claim ready and willing to double their paychecks.

If nothing else, we are thankful that those days appear to be long gone. Redskins general manager Bruce Allen has been aggressive in setting up visits with free agents, but for the first time in recent memory these get-togethers don’t guarantee anything.

In the past, Redskins One would be gassed up and ready to go at the stroke of midnight when free agency kicked off. A big-name player would be wined and dined at Morton’s with the head coach and The Danny (also known as Redskins owner Daniel Snyder) and would finish the night with courtside seats at a Wizards game (clearly this would be considered punishment now, instead of a selling point as it was back when the Wiz were relevant).

Now, a player like offensive lineman Tony Pashos visits town, chats with the new powers that be and ends up signing in Cleveland for peanuts. Talk about culture shock; ‘Skins fans never fathomed a day when the Browns outbid the Redskins for a free agent. But that’s where we are these days. And honestly, we couldn’t be happier.

None of the players that have been added this offseason – with the exception of Johnson – are considered household names. Sure, football fans have heard of Grossman, but he’s only started nine or more games in a season once, meaning he’s got little to no expectations surrounding him.

For his career, Grossman has played in 37 NFL games (31 starts). He has completed 524 of 971 passes (54 percent) for 6,197 yards, with 33 touchdowns and 36 interceptions. He’s average in every sense of the word. But he’s not here to be a savior; he’s simply a player that Mike and Kyle Shanahan felt they could bring in who is familiar enough with their offense to help the rest of the roster catch on.

It’s no different than when former Redskins offensive coordinator Al Saunders brought quarterback Todd Collins with him. No one expects Grossman to play in actual games; he’s just an extension of the coaching staff. It’s a one-year deal, which gives him enough time to come in, show Jason Campbell and/or whoever else is playing quarterback how to run the new offense and then Grossman can move on to another city.

Ryan, who caught 14 passes for 135 yards and two touchdowns last season for Kansas City, also signed a one-year deal. He’s considered a solid blocking tight end, but he’s also bounced around the league – playing for six different teams since he entered the league in 2004.

He’s here for depth purposes and is clearly no threat to talented tight ends like Chris Cooley or Fred Davis. And while “Touchdown” Todd Yoder is as extremely likeable with his laid-back personality and occasional Mohawk, he only had four catches a season ago. If the coaching staff determines Ryan is a better fit for what they’re trying to do, so be it.

Kemoeatu is an intriguing acquisition. He signed a two-year contract worth less than $7 million, which could prove to be a steal if he’s healthy this year.

The 6-foot-5, 345-pound Kemoeatu spent last season on injured reserve with the Carolina Panthers after tearing his Achilles’ tendon in training camp. If healthy, then he can line up at nose tackle and provide the Redskins defense with some flexibility in how they can use defensive lineman/malcontent Albert Haynesworth. If he’s not able to get healthy, it’s not a big deal because the Redskins didn’t invest a ton of money into the guy.

Finally, we have Hicks, who was a welcome addition to what had to be the NFL’s worst offensive line a season ago. Continuing with the theme of the offseason, Hicks signed a bargain-basement deal at three years worth about $9 million, with just $3 million guaranteed.

Hicks isn’t a lock to be a starter, but he’s versatile enough to slide just about anywhere on the offensive line. In his eight seasons in the league, Hicks has played in every spot on the line except center. Now, if the Redskins can sign three more guys like him, they might actually be able to run plays that require more than a three-step drop.

Many expected the Redskins to go nuts this offseason, with the disappearance of a salary cap, but that’s not the case.

Look at the names one more time – Hicks, Kemoeatu, Ryan, Johnson and Grossman. The team was able to add an offensive lineman, defensive lineman, tight end, running back and quarterback without breaking the bank for any of them. Honestly, their combined salaries equal one of their standard mega-millions contracts they used to waste on guys like Antwaan Randle El or Brandon Lloyd.

There is no guarantee that any of these players will work out. But at the end of the day, most of these players are low-risk, high-reward guys with incentive-based contracts designed to keep them motivated. If Johnson shows up and can’t stay out of trouble, then the Redskins can cut him and move on without much loss.

We’re not in love with the move, but we can’t knock the way Allen handled it. Like Kemoeatu with his injury concerns, the team didn’t invest much money in Johnson, and when the salary cap returns, the Redskins will be in good shape if he’s here for the length of his contract or if they have to cut Johnson early.

For the first time in recent history it really does look like the front office has a plan and is sticking to it. It might lose them their “offseason champs” moniker, but for the first time in a long, long time, the Redskins actually resemble a legitimate NFL franchise. They’ve still got a ways to go to return to respectability, but this is a good start.

[Editor’s note: The Redskins’ new approach to free agency was the primary topic of conversation on Skinscast this week. Click here to listen to the show.]