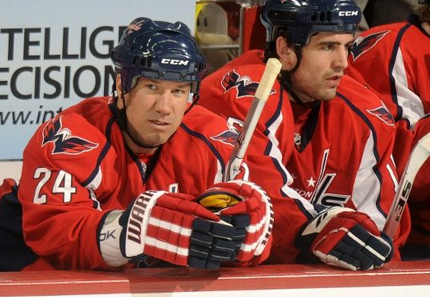 Simply put – everything the Washington Capitals touch turns to gold. It’s really as if, at this point, folks within the organization can do no wrong.

How else can you explain everything that has transpired this week? Caps general manager George McPhee could have sat back and rolled the dice that his roster – already with the league’s top record – has enough firepower to make a legit run for the Stanley Cup.

After years of sticking to the plan, McPhee has constructed a roster as deep as any in hockey. The Capitals, as well as their minor-league affiliate Hershey Bears, are at the top of the standings and can beat you several different ways. But GMGM pulled the trigger on four trades, each specifically designed to add depth and a steadying veteran presence, and let everyone know he’s in it to win it this year.

Forwards Scott Walker, Eric Belanger and defensemen Milan Jurcina and Joe Corvo were all brought in and suddenly coach Bruce Boudreau was presented with some tough decisions in regards to his gameday lineup. How soon should he attempt to integrate the new guys? Jurcina is out six weeks with a sports hernia, but the other three all participated in the morning skate and were ready to play.

Boudreau mulled introducing each of the new players gradually into his gameday rotation, but ultimately settled on a baptism by fire approach. Throw all three into the mix and see how they pan out.

Belanger actually started against the Tampa Bay Lightning last night, lining up at center on the Caps’ third line with forwards Tomas Fleischmann and Eric Fehr. Corvo also started, pairing up with defenseman Tom Poti. Walker ended up on the fourth line with center Boyd Gordon and forward Jason Chimera.

The decision to roll with the new guys meant regulars like Matt Bradley, David Steckel and John Erskine were all bumped from the lineup. Clearly there is a glut of qualified NHL players, which is a good problem to have if you’re Boudreau. While the new guys have 18 games left to get settled in and adjusted to Boudreau’s philosophies, he’ll be tasked with juggling the roster and keeping his players (relatively) happy.

Belanger actually got off to the best start out of the new guys, quickly developing chemistry with Fehr. The two had no trouble cycling the puck in the early stages of the game, which was noteworthy because much of the Caps’ roster looked sluggish in the early stages. They looked like a team transitioning back from a three-week layoff to playing on back-to-back nights.

Their hard work was rewarded early when Fehr ripped a wristshot past Lightning goalie Mike Smith at 6:10 into the first period. The rest of the evening was less eventful for Belanger, who won five of 12 faceoffs on the night.

And then there was Walker. This is what we said just yesterday about Walker:

Because he goes all out every single shift, Walker is instantly a fan favorite wherever he plays. He’s not the biggest dog in the fight, but he’s scrappy. He’s physical. He’s “Rudy” on skates. He plays right wing, but came into the league as a defenseman, so he’s responsible in his own end. He’s a high-energy veteran who leads by example.

Well, the 36-year-old forward was on the ice for seven minutes and 33 seconds and damn if he didn’t make the most out of it.

Walker first made his presence known on the defensive side of the rink. After Lightning forward Steve Downie, as usual, tried to take a few liberties with Alex Ovechkin, Walker made sure to send a message to the Lightning antagonist.

While backchecking in the third period, Walker threw his body around twice, colliding with Downie, letting the Lightning know they weren’t going to get away with taking shots at the best player in hockey while simultaneously informing his new teammates that he’s got their backs.

Had that been it, Caps fans still would have left with a favorable impression of Walker. But he had more in store for the Verizon Center faithful. Walker, who had just three goals in 33 games with Carolina this year, scored two goals for the Caps in a three-minute span to secure victory for the home team and to instantly earn fan-favorite status in D.C.

Neither Walker goal was overly impressive. He just went to the net and outworked bigger, stronger players to get to the puck and sneak it past Smith. You know what people call those? Playoff-caliber goals.

Those kinds of goals are the difference in a seven-game series. They’re not pretty, but they keep the dream alive.

So, to recap, McPhee made a series of moves when he didn’t have to, Boudreau opted to roll the dice and infuse his lineup with a trio of newbies and Walker rewards both with his first two-goal game in three years.

Like we said at the top, after years of tough breaks, this team is finally enjoying some good luck and good fortune. At this point, McPhee could talk forward Peter Bondra out of retirement and he’d have a hat trick against the New York Rangers this weekend. He’s on that kind of a roll.

Here’s hoping it continues for McPhee and the Capitals even after the regular season comes to an end.