on deadline day, caps go all in 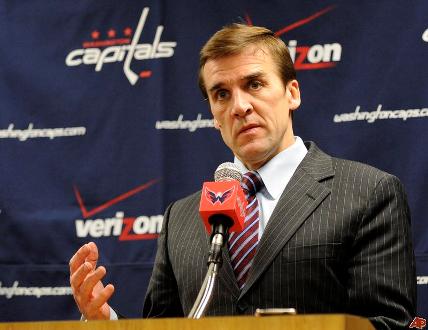 Make no mistake about it – if Washington Capitals general manager George McPhee was engaged in a high-stakes poker game, he just went all in.

That’s the best way to describe his flurry of activity prior to the National Hockey League’s trading deadline yesterday. McPhee, who played coy the last few days, was one of the busiest general managers on deadline day.

Forwards Scott Walker, Eric Belanger and defensemen Joe Corvo and Milan Jurcina were acquired. Defenseman Brian Pothier, middle-tier prospect Oskar Osala and four draft picks (two second rounders, as well as a sixth- and seventh-round selection) were shipped off. That’s four additions to the locker room while only subtracting one player from his current lineup.

The names might not be as big as a couple years ago when McPhee landed forwards Sergei Fedorov, Matt Cooke and goalie Christobal Huet on deadline day during the 2007-08 season, but that’s not a bad thing.

Truth is, McPhee didn’t need to re-tool an entire roster. The Caps came back from the Olympic break with the NHL’s best record and any moves were specifically designed to add a few final pieces in an effort to take home the Stanley Cup this year. So what do we know about the new guys?

Let’s start with Walker. Because he goes all out every single shift, Walker is instantly a fan favorite wherever he plays. He’s not the biggest dog in the fight, but he’s scrappy. He’s physical. He’s “Rudy” on skates. He plays right wing, but came into the league as a defenseman, so he’s responsible in his own end. He’s a high-energy veteran who leads by example. The Caps gave up a seventh-round pick to land him, and Carolina Hurricanes fans (both of them) are bummed that he’s gone.

Belanger had 13 goals and 22 assists for Minnesota, which is noteworthy because it’s not as if there are a ton of points being racked up by the Wild. The 32-year-old center ranks seventh in the league in faceoffs and, more than anyone else acquired yesterday, addresses what could be perceived as a need.

Grinders David Steckel and Boyd Gordon are both very good in the faceoff circle. Your top two centermen – Nicklas Backstrom and Brendan Morrison – have their moments, but aren’t on the same level. Prior to the Olympics, Tomas Fleischmann saw plenty of action at center, but that was because the Czech Republic team asked for him to get some time in the middle to help their cause once they headed to Vancouver.

Belanger steps into a role on one of the top three lines and shouldn’t have much issue earning playing time. He’s a speedy forward who isn’t afraid to throw his body around and does well on the penalty kill. Those are all qualities that help come playoff time.

Corvo is the wild card out of the new guys. He represents an upgrade on the blue line, but he’s a different kind of player than fans clamored for when they begged McPhee to add a rugged, physical defenseman.

“Big Joe,” as he was known in Carolina is kind of a poor man’s Mike Green. He’s fast, likes to have the puck on his stick and has a big shot. He’s not afraid to take chances and jump up to help his offense, but he’s sometimes careless with the puck and is occasionally prone to turnovers and questionable decision making.

The 32-year-old defenseman is capable of playing a ton of minutes, excels on the powerplay and has played for coach Bruce Boudreau. The team believed he was the best defenseman available and went after him – even if he’s not exactly what many feel this team is lacking most.

If Jurcina sounds familiar, it’s because he started the season with the Capitals. We won’t waste time breaking him down because he’s played more than 200 games for the Caps. That won’t stop us from throwing out a theory about how “Juice” landed back in D.C.

We get the feeling that as the trade deadline drew near, McPhee wasn’t convinced he’d be able to trade for depth on the blue line. Lots of names were rumored to be available, but when push came to shove, either teams had a change of heart or the price tag was too high. So McPhee agreed to bring Jurcina from Columbus in exchange for a sixth-round pick, even though it appears he’ll be out of action for six weeks or so due to a sports hernia. That’s our best guess, although we fully admit we have no clue if it’s even remotely accurate.

We have a confession to make. Once the deals were done and the Caps had four new names to integrate into the lineup, we were curious to see what the new lines might look like. With that in mind, we fired up NHL 2010 (a great game, by the way) and went into roster management to see what we could figure out.

After toying around a little bit, here’s what we came up with:

We’ve got no clue exactly how Boudreau plans to utilize his new weapons. And with his reputation of mixing and matching his lines, he might not settle on anything firm until the regular season ends. But what those possible lines show is a veteran lineup with lots of depth up front and the Caps appear to be pretty set on defense as well.

Adding these new names means unproven players like Quintin Laing and Tyler Sloan can stay with Hershey because there’s enough depth already in place to survive if someone gets banged up in the postseason. We’d love to see Karl Alzner or John Carlson in the defensive rotation, especially since, in our opinion, the negatives of playing Erskine outweigh the positives. But the rest of the roster looks pretty formidable.

And for anyone unsure if those four trades don’t signify a “win now” mentality, we feel obligated to point out that all four additions to the Capitals roster are unrestricted free agents. They’re here for the final 19 games of the regular season and the playoffs. Nothing beyond that is guaranteed.

If they excel under Boudreau, then McPhee is in a good position to keep them around a while longer. If not, the only thing sacrificed was a draft pick or two. After years of stockpiling draft picks and young players, McPhee deserved the right to makes these moves. The Capitals are the NHL’s top team at the moment. Same for the Hershey Bears.

He looked at his hand and had to think, “I’ve got just as good of a chance to win this pot as anyone else at the table.” So McPhee pushed his chips into the middle and now it’s time to sit back and let the hand play out.