carlson continues to make an impression 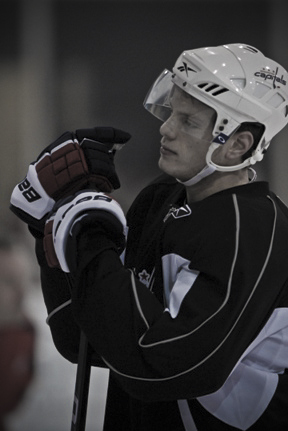 The Washington Capitals have been on quite a roll lately, winning six of their last seven games while outscoring their opponents 37-20.

But here’s the interesting part – while the league’s top offense has been firing on all cylinders, over the last two games we couldn’t help but focus on the other side of the rink.

With Alex Ovechkin and friends single-handedly ensuring Caps fans get more than their fair share of free chicken wings, our attention kept gravitating to the play of rookie defenseman John Carlson.

In wins over Toronto and Philadelphia, Carlson was a plus four, best among the team’s defenseman. Averaging roughly 15 minutes of playing time in each game, the highly-touted prospect looked downright at home while playing in front of the Verizon Center faithful. Most importantly, he played with a level of confidence rarely seen in a 20-year-old playing his sport at the highest level.

“He’s really mature out there,” said Capitals goalie Jose Theodore. “He’s not panicking. A lot of young guys, when they come up they get rid of the puck too soon and rush their game. With him, he’s really patient and he plays with confidence and poise. That’s what you want to see in a young player.”

Carlson made his NHL debut back in November, and managed to stay with the Caps for three games before returning back to the Hershey Bears. With recent injuries to defensemen John Erskine and Brian Pothier, Carlson was called back up Friday and definitely looked more comfortable the second time around.

It might have been a decade or two ago, but Caps defenseman Tom Poti remembers what it was like to be a young player getting his first chance to crack an NHL lineup. In his opinion, Carlson has played about as well as we could reasonably expect.

“He’s shown some experience out there,” he said. “He’s been playing well. The second call-up, I think is easier than your first. You’re not looking at the bright lights and you kind of get over the fact that you made it to where you’ve been dreaming of your whole life. He’s been a lot more comfortable. You can see him jumping in the play and making things happen. He’s been playing some really good minutes for us.”

We caught up with Carlson yesterday after practice to see how the kid was adjusting to life in the NHL this second go-round.

This second time around you really look more at home out there. Do you feel more comfortable playing NHL hockey?

“Yeah, definitely,” Carlson said. “I feel a lot better out there, even just from the Toronto game to the Philly game. That’s what it’s all about, I guess. Just getting better every day and every game. Everything is going well and I think because I’m feeling more comfortable out there it’s allowing me to play my style of hockey. I’m jumping in the rush a little more, taking a few chances and continuing to develop my game.”

What did you learn from your first call-up back in November?

“It’s pretty cut and dry, the things I need to work on,” he said. “I know what I need to get better at. That’s what the coaches here and at Hershey are for, helping me out. Same with the guys in the locker room. It’s been great. I can’t ask for much more than everyone has given me. At the end of the day, I just need to try to get better every day and keep on the right track.”

Jose Theodore said from his perspective, you’re not playing like a 20-year-old. He said you’re playing well and avoiding a lot of the mistakes that you typically see from a rookie. What’s it mean to hear an established veteran talking you up like that?

“First off, he’s a great goalie who has had an unbelievable career,” Carlson said. “For a guy like that to say those things, it’s really nice. I think what he was talking about was true – you’ve got to learn you have more time with the puck than you think you do. Instead of just ripping it up the wall, you’ve got to pick your head up and look to make a play. That comes with confidence really. Anyone that has a chance to get called up has the ability, you’ve just got to build up your confidence and then you feel a lot better out there because you’re able to make those plays.”

We’ve heard rumors that you’ve caught some grief from some of the Canadian players for your recent heroics with Team USA in the World Juniors. Is that the case?

“Yeah, but it’s all been in good fun,” he said. “It makes it that much sweeter when there’s jokes flying around like that. These guys have all been really good to me and it’s been a lot of fun.”

Last season Karl Alzner shed some light on the life of an NHL rookie when he admitted that he basically waited until 4 p.m. every day to go buy dinner because he didn’t know if he’d be in town long enough to buy groceries for more than a day or two. With guys getting healthy, how do you not let it affect you wondering when you’re going to be sent back down again?

“I’m just here for as long as they tell me,” Carlson said. “You have to go into every day like it could be your last day here. You really want to try and make a statement every day, whether it’s in practice or in a game. Just go out and play your game and make a statement. That’s pretty much the only way I can look at it. It’s been a great experience, but I want more. I want to stay up longer and play more games. This is my dream, so I’m doing whatever it takes to live it.”

It’s refreshing to hear you be so level headed about the situation, because, speaking on behalf of Caps fans, we’ll admit it’s tough to be patient when we know talented guys like you and Alzner are in the system. We simply have a hard time waiting for you guys to be given the opportunity to make this roster once and for all.

“It’s very cool when fans say stuff like that,” he said. “It feels good to be here and to get more comfortable out there. I just hope this all continues.”

Sadly, we might have been the last interview Carlson participated in yesterday before he was informed that the team was shipping him back to Hershey. We were still driving back home from Kettler when the Caps announced the move.

The truth is, the Capitals have a surplus of defensemen, and until the team makes a move or two to free up a roster space, guys like Carlson and Alzner are the only players the organization has flexibility with to move down to the minors.

When the Caps were rebuilding, they basically initiated an entire wave of youngsters with a baptism by fire, so to speak. Now that the franchise has built some depth, they can take their time and let Carlson, Alzner and others develop at a slower pace.

Carlson has the right approach, knowing that there’s nothing he can do but go out and play his best each and every day. He’s accepted the situation for what it is and is at peace with it. Now, if only we could do the same.