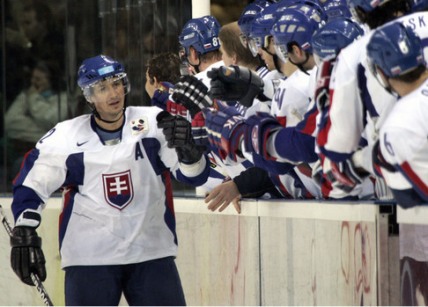 In a previous incarnation, Peter Bondra was one of the most beloved players to ever lace up skates as a member of the Washington Capitals.

These days, Bondra has long since retired, but remains very much involved with hockey in his role as general manager for the Slovakian national hockey team.

When we spotted Bondra in the press box Wednesday night as the Caps took on the New York Islanders, we simply couldn’t resist checking in with one of the Capitals’ all-time greats.

“Life is good,” Bondra said. “I have more of a chance to watch games, not just at home on TV, but going to games. I have a coach from the Slovak national team with me, and we’re going to go see [forward Marian] Gaborik and the New York Rangers next. We also have plans to see [Lightning defenseman Andrej] Meszaros versus [Los Angeles Kings center Michal] Handzus in Tampa this weekend. So yeah, we’re pretty busy. More than usual. It’s a big year for us – for pro hockey, for the Olympics, for all of the sport – and I’m excited about it.”

Regardless of where your new role takes you, you will forever be one of the fan favorites in this town. How much of the Caps have you been able to see this year?

“This is maybe my fourth or fifth game,” he said. “I have more of a chance to see them on TV. The only time I really get to come here is when a Slovakian player is in the building, like Milan Jurcina. He’s always here, but if other Slovakian players are here, I have a chance to watch him and maybe talk to him a little bit after the game to remind him how big of a year it is for the Slovakian team.”

We’re curious. How does your perspective change when you go from watching hockey as a fan to watching as a general manager? Can you just sit back and watch a game anymore?

“I wish I had all of the knowledge that I have now back when I was 18 or 20 years old,” Bondra said with a laugh. “I think it’s really easy to watch games. I will always love the game and follow the Caps. I really like the way they play. They’re a really exciting team to watch for any hockey fan.”

Have you ever pulled Capitals general manager George McPhee aside and asked for some tips?

(Laughs). “My job is easy,” he said. “You can’t compare an NHL GM to my position. George has to deal with problems on a daily basis, with contracts and other issues. My job is just to put the right people in the right spots for the national team.”

Fair enough. But that’s not going to stop us from asking you to play the role of McPhee for a moment. They’ve got some tough decisions coming up, with guys like center Nicklas Backstrom and forward Alexander Semin closing in on free agency. If you were running the Caps, how would you handle the situation?

“I think they might need to change the last couple players on the roster,” Bondra said. “But they’ve picked up guys like Mike Knuble and Brendan Morrison, guys I know and that I played against. They’ve both been a good fit, so far. I don’t think they need to improve too much on defense – maybe adding depth for the playoffs. Maybe they could go that direction.

“Goaltending? The goaltending came into question last year in the playoffs,” he continued. “Hopefully the situation will play itself out during the season, but I don’t think this team has many issues. It’s a really solid team with a lot of young players and good depth. They’re getting a lot of experience from the last few years and they’re continuing in the right direction. If they can’t win it this year, then they’ll definitely be in it for next year. They’re very close to being ready to do some damage in the playoffs.”

So you’d be comfortable giving an up-and-down player like Alexander Semin a long-term contract?

“You’ve got to sign those guys,” Bondra said. “Semin is a big positive for this team because he forces teams to focus on someone other than just Ovi. When they spread them out, there’s a lot of depth. When Semin is healthy and has his mind in the game, he’s a big part of this team. You’ve got to lock up guys like that. They did it with Mike Green because he’s a Norris Trophy candidate, and you have to take care of those guys. They’re your players. You can’t let them go.”

Last time we saw Ted Leonsis, we asked him when he was planning on retiring your number. He said as far as he’s concerned, you could still play for the Caps today. So what’s it going to take to get you back out there?

“A couple surgeries,” Bondra said. “I still enjoy playing and can still play, but obviously my priorities have changed from when I was 22 or 23. My family and my health are most important now. Of course I miss the game and I’d love to come back, but it’s not possible for me to play anymore. It’s too bad.”