catching up with bonzai 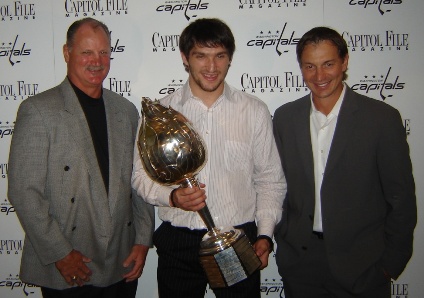 Last week we posted an interview with Washington Capitals forward Brooks Laich in which he talked about being traded for forward Peter Bondra. As luck would have it, we ran into the local icon this past weekend at the Verizon Center and he was kind enough to answer a few questions about life after hockey, the new goal scorer in town and his thoughts about retiring his jersey.

What brings you to town this weekend?

“Well, right now I’m working for the Slovakian National team as their general manager and there’s a couple players I’m here to watch,” Bondra said. “What I do, I want to see the guys, how they play in person and maybe talk to them after the game. You know, talk about the Olympics coming up in 2010 and possibly the world championships for a couple guys here.”

It’s been a while since we’ve seen you around. How’s life treating you these days?

“Good,” he said. “I’m happy and retired and enjoying going to my kids’ games, traveling to their practices. It’s much more calm. I can relax and enjoy it. Actually, I can live life now. Before, you always had to think about the next game or getting to sleep or eating well and concentrating more on a hockey perspective than yourself or your family.”

You just had a birthday this month. Are you feeling older these days or are you still feeling pretty good?

“No, I still feel good,” Bondra said. “I still go to gym. I still ride a bike. I go running and play any sport I possibly can, so I’m in good health and am trying to stay in shape.”

What do you think of the atmosphere at Caps games now? D.C. has kind of turned into a hockey town now, hasn’t it?

“It’s great, it’s great,” he said. “Everything started the last half of last season for the Caps and now there’s a big buzz in town. People talk about the games and it’s hard to get tickets. I tried to get a couple tickets for my friends and I couldn’t do it, but I think it’s great. The Washington area needs something like this and hopefully this will continue to the playoffs and deep in the playoffs.”

Wait a minute. Did you just say one of the biggest names in franchise history can’t get Caps tickets?

“Well, I have two tickets from the Alumni, but I have two sons and a friend from Europe that want to go to games,” Bondra said. “One of my sons had to stay home [tonight] because I couldn’t get him a ticket. I didn’t try to call the ticket office, I just told him, ‘Hey, I don’t have any.’ But he’ll be here at the next home game. I think I’ll just have to choose which one gets to come to each game.”

This franchise has been to one Stanley Cup finals, which you were obviously a part of. Does this year’s team have what it takes to get there?

“I think so,” he said. “Last year was a good experience for them because most of the guys are young – they had a lot of rookies and young players on the team. This year they can go deeper and who knows? Now, these days, there’s not just two or three teams that can win the Cup. There’s no favorite team. More teams have a chance to win it because of the salary cap and changes to the league.”

You’re a goal scorer. Do you ever get tired of watching Alex Ovechkin play?

“No, it’s amazing what he can do,” Bondra said. “Not just Alex, but I put Alex Semin in too. Both of those guys have an unbelievable shot and they like to shoot through the defender. It’s hard for goalies to read their shots and it’s just amazing. Alex’s goal [against Montreal], I was watching from downstairs in the crowd and it was just amazing. I was thinking ‘How does he do that?’ It makes you stop and say, ‘Wow.’”

So you’re alright if/when he breaks your records?

“Of course … it might be next year,” he said with a laugh. “I’d never have a problem with him and I wish him well. He’s special. I mean, there’s not many players like him in the league. He’s the guy. He can do anything he decides to do.”

When are the Capitals going to retire your jersey number?

“I don’t know,” he said. “I talked to Ted [Leonsis] last year a little bit about it, but I can’t really control it. It would be nice, but at the same time, it’s not going to ruin my life. I’m happy with what I’ve done and how far I went – from the guy who came over here and just tried to play some hockey. I’m proud of myself and how far I’ve come.”

At that point, we thanked Bondra for his time and wished him well. By chance, we ran into Capitals owner Ted Leonsis in the team’s locker room after Sunday’s 5-2 win against the Penguins. We took the opportunity to ask Leonsis one simple question – have you given any thought to retiring Bondra’s number?

“No, he just retired. He could still play,” Leonsis said. “I talked to him about playing, so give it a couple years. Of course Peter Bondra is going to be up in the rafters, but it needs to stew. We just put Mike Gartner’s number up there and Peter’s back in the fold and hanging around. I’m sure we’ll do the right thing, but not in the foreseeable future.”