steckel ready to break out 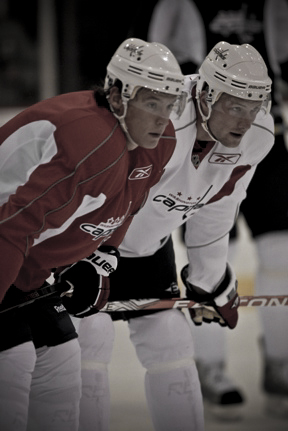 Washington Capitals center David Steckel ranked in the top five in the NHL last season in faceoff percentage – winning 57.9 of the draws he took. He’s made a living on coach Bruce Boudreau’s checking line and as one of the team’s most trusted penalty killers.

But hockey fans saw a new side of the 6-foot-5 center during the team’s postseason run, scoring several key goals – including the overtime winner in Game 6 against the Pittsburgh Penguins.

It’s no secret we love the way Steckel plays the game. In fact, we singled him out as a potential breakout player in our season preview earlier this week. With that in mind, we caught up with the 27-year-old on the eve of the season opener to make sure he makes us look good.

Be honest, how excited are you to get back out on the ice and make a run at the Stanley Cup?

“I’m really excited,” he said. “It’s been a really long summer and all of our guys worked hard in the offseason because we’ve got something to prove this year. I think we’re all really looking forward to Thursday night.”

You had a very strong postseason – winning seemingly every faceoff you took and adding a scoring touch to your arsenal. What are you going to do for an encore?

“I’m just trying to keep the momentum going and build off of it,” Steckel said. “We had great chemistry with our line [of Steckel, Brooks Laich and Matt Bradley] and individually, I had some success scoring goals. I’m going to get a shot with the third line this year, so I want to make sure I keep it and be an asset to this team.”

We’ve been talking you up for a while, so it was nice of you to make us look good.

(Laughs). “Yeah, and I want to build off that and prove to people that I am that kind of player,” he said. “I’m not just defensive minded.”

Could you talk to us about the new guys – Mike Knuble and Brendan Morrison – and what you’ve seen from them so far?

“They fit right in,” Steckel said. “I wouldn’t classify them as new anymore. It feels like they’ve already been here for a while, so in that sense, they’ve been awesome. They bring to the table a lot of the things we were missing last year and they’re proven NHL players. They’re going to be great for us. They bring great leadership, and it’s always good to have a veteran presence in the locker room.”

What does this team have to do to make it to the next level?

“I think we’re there,” he said. “The first year, the first series against Philly, we were just happy to be there. We had a great run at the end of the year just to make the playoffs. Last year, I thought we had the team and character to do it – I think we all did. This year we’re going in with the mentality that anything less is going to be disappointing. As long as we keep that mindset, I think you’ll see a lot of the same things as last year. And hopefully, with some improvements.”

And on a personal level, what can we expect from you this year?

“Same old stuff,” Steckel said. “Being strong on the penalty kill, great on faceoffs and hopefully chipping in a few more goals this year.”