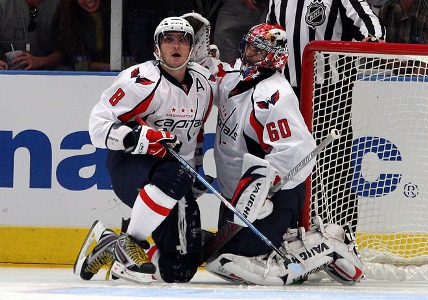 The Washington Capitals kick off what has to be D.C.’s most anticipated professional sports season in recent memory Thursday night, when they take on the Boston Bruins in their season opener.

Why are folks so jacked up for the upcoming season? That’s easy.

The Redskins ended any hopes of a competitive season when they lost to the inept Detroit Lions 19-14 Sunday. The Nationals have lost more than 100 games for the second consecutive season and still look years away from being a competent franchise. The Wizards are heading into a season with a bunch of jump shooters who don’t play defense. So yeah, the fact that the Caps are viewed as legitimate Stanley Cup contenders, is kind of a big deal.

DC Pro Sports Report recently asked local bloggers to predict how the upcoming season will play out. While we were asked to keep our answer brief for them, we decided to expound on our original answers for the benefit of our loyal readers.

1. Will the Capitals three-peat as Southeast Division Champs?

This team is arguably the deepest the Caps have been under the guidance of coach Bruce Boudreau. Forwards Sergei Fedorov, Viktor Kozlov and Donald Brashear have been let go. Forwards Mike Knuble, Brendan Morrison and a handful of youngsters have been given the chance to earn their open roster spots.

Meanwhile, the defense is stocked with promising, young talent. Tom Poti and Brian Pothier are each 32. Everyone else is under 30 – with guys like Shaone Morrisonn (26), Milan Jurcina (26) and Mike Green (23) each having plenty of hockey left to be played.

And the goaltending situation looks solid as well, with Semyon Varlamov, Jose Theodore and even Michal Neuvirth looking like solid options in net.

2.  Do you foresee a Washington Capitals Stanley Cup appearance this season?

If they’re following the Pittsburgh Penguins script, then Year 3 ends in a Stanley Cup Finals visit. The first year the Caps just dipped their toe in the pool. Last year, they waded into the kiddie pool area. This year? They’re bouncing off the diving board into the deep end.

3. If and when will youngster Semyon Varlamov wrestle the starting goalie spot from Jose Theodore?

We’re of the mindset that the team is only calling Theodore the starter to try and get some kind of trade value for him. If they can get his big price tag off the books while bringing back something in a trade, they’d do it tomorrow. If not, they’ll roll into the season splitting time between Theodore and Varlamov.

And if they can package Theodore and disgruntled forward Michael Nylander in a trade, then George McPhee should immediately be tasked with fixing our economy.

4. Seems each year there is a surprise offensive player?  Who would you project to be that player this season for the Caps?

Watch for the continued emergence of underrated center David Steckel. It started last year in the playoffs, and will continue this season. The guys does a lot more than win faceoffs and kill penalties. He can score. He can pass. He does all of the little, unselfish things a coach loves. He might have earned his way onto the roster playing as a grinder, but Steckel can basically play any role Boudreau asks of him. Here’s hoping the team continues to find minutes for the most underrated player in that locker room.

5.  What player or type of player do you think the Caps need to make the push to win the Stanley Cup?

The Knuble signing was huge. Having Knuble, Steckel, Brooks Laich and a healthy Chris Clark gives the team several gritty players who aren’t afraid to roll up their sleeves and get a little dirty. Clearly, that’s what was missing a year ago when the team thought that they could skate ‘figure eights’ around the competition in the postseason.

Knuble led the Caps with four goals in the preseason, and there’s little reason to think he won’t continue to prosper playing on a line with Alex Ovechkin and Nicklas Backstrom for the bulk of the season.

6.  What impact do you think 2008 first rounder John Carlson will make this season with the Caps?

Why rush the kid? Even though both of them are going to start the season in the minors, I’m expecting bigger things from Karl Alzner. He logged 30 games with Washington a year ago and has an idea of the physical and emotional toll it takes to stick at this level. Let’s give Carlson a little more time before we throw any lofty expectations at him.