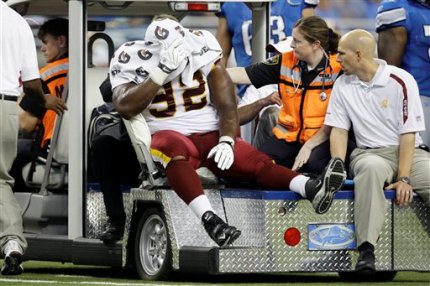 1. “Killing Me Softly” by The Fugees

The most intriguing aspect for the Washington Redskins as they headed to Detroit to face the winless Lions was simple – how would the team respond leaving the hostile-work environment known as FedEx Field in favor of Detroit?

Yes, that’s how bad things had gotten just three weeks into the 2009 season. The ‘Skins needed to pack up the car for a road trip in order to get away from the boo birds, so they headed to Motown, where a mostly apathetic Lions fanbase has seen so many losses over the last decade or so that, if they show up on gameday, it’s usually with a brown paper bag over their heads.

What happened next is already well known. The Redskins are now officially the laughingstock of the NFL, losing to Detroit 19-14. It’s the Lion’s first victory since Dec. 23, 2007, and snaps the second-longest losing streak in league history. If reserve linebacker Robert Henson didn’t like the home crowd last week, just wait until next week against Tampa Bay the first time the Redskins go three-and-out.

Sunday the Redskins lost in front of the smallest crowd in Ford Field history (less than 41,000). There’ll be twice as many people in attendance at FedEx Field next week, and it’s a safe bet they’re not going to be in a great mood. Things are about to get interesting around here.

2. “Pity and Fear” by Death Cab For Cutie

Here’s the most painful part of it all – the Lions pretty much dominated this game from start to finish. They held the ball for nearly 37 minutes. They had 381 yards of total offense. They converted 10 of 18 third downs. Led by a rookie quarterback making just his third professional start, they marched up and down the field at will – putting together four monster scoring drives against what we believed was a dominant Redskins defense.

This isn’t going to be very popular, but we feel it needs to be said. Mike Sellers is quite possibly the most overrated member of the Washington Redskins. Think about it. Any time someone is telling you how great Sellers is, it’s normally him talking. And honestly, every time we make it a point to watch him during a game, we come away less than impressed.

Last week he dropped a “gimme” touchdown pass that would have gone a long way towards quieting the backlash the team felt from fans after barely pulling out a victory against the woeful St. Louis Rams. This week, we watched him stand flat footed on a pass from Campbell that the defender had time to run around Sellers to defend. Had the defensive back been able to hold onto the ball, it would have been the easiest interception for a touchdown of his career – all while Sellers stood there wondering what the hell just happened.

And that’s not even the worst part. For more than a year we’ve noticed a very troubling trend. Every single time the Redskins have absolutely had to gain one yard with the game on the line, they fail. The team’s offensive line issues are well documented, but if we’re talking about going for it on fourth-and-a-foot, shouldn’t your supposed Pro Bowl fullback be able to get enough push to get your Pro Bowl running back that one yard?

We’re not even mentioning the debacle that was Sellers carrying the football in Cincinnati last year. No need to go that far back. Just last week, Sellers and the Redskins offense couldn’t get it done on fourth down as the ‘Skins tried to run out the clock, and it happened again on the first drive of the day against Detroit. Go back and watch the play again – and specifically watch Sellers. If you do, chances are you’ll come away thinking the same thing we did – if this is his best effort, it’s a good thing he already got paid.

4. “This Place is a Prison” by The Postal Service

Which brings us to running back Clinton Portis.

Where do we begin? His offensive line is old and unreliable. His fullback is more flash than substance. And when the Redskins are driving down the field with minutes left in their worst-case scenario (you know, losing to the worst team imaginable), Portis contributed as much as Tom Cruise. That’s because Portis was, for reasons unbeknownst to us, sidelined in favor of the rarely used Rock Cartwright.

Think about it – you’ve got one of the premiere backs in football at your disposal, and you opt to go with a guy trying to stave off nobodies like Marcus Mason and Anthony Alridge just for playing time. In what world does that make sense?

With time running out on the game and possibly even the competitive portion of the season, Campbell completed three consecutive passes to Cartwright, the third of which was the team’s third offensive touchdown of 2009. Meanwhile, Portis might as well have read lines with Cruise. At least then he could have felt like he was doing something to earn a paycheck.

Through three games Portis has just 47 carries for 183 yards and zero touchdowns. A year ago, Portis had 65 carries for 248 yards and three touchdowns through the first three games. In the words of Joe Theismann, “It’s not rocket surgery.” He can’t help if he doesn’t touch the football. And people wonder why, from time to time, Portis daydreams about playing for a different franchise.

There will be plenty of “Fire Jim Zorn” talk this week. There will be call for the benching/trading/deporting of Jason Campbell. Just know, those folks are either unwilling or unable to see the big picture. This issue goes deeper than a head coach or quarterback.

There is a fundamental flaw with the way the Washington Redskins choose to do business. While successful teams build through the draft while focusing primarily on the offensive and defensive lines, Vinny Cerrato and friends continue to chase the big names. Why watch film of college kids when you can scout your players on Dancin’ with the Stars?

When you play fantasy football it’s cool. When your favorite football team does it … not so much. And when your team cannot win the line of scrimmage on either side of the ball against a doormat Lions squad that had lost 19-consecutive games … well, it’s time for a little accountability.

Bringing in a new quarterback or coach isn’t going to fix the problem (unless they pull a Marty Schottenheimer and demand Cerrato pack his bags before arriving at Redskins Park). Think about the last decade of mediocrity. Coaches and quarterbacks have come and gone, but what has been the constant? Cerrato.

It’s completely acceptable for fans to be outraged right about now. They just need to make sure they focus that anger in the right direction. Last year the equally inept Matt Millen was run out of Detroit and this weekend showed us that the Lions are heading in the right direction. Let’s learn from this travesty and be honest about the state of the franchise. The glory days are long gone. You now root for a team that regularly loses to the likes of the Lions, Rams and Bengals.

Step one is admitting the Redskins have a problem. Step two is taking action.