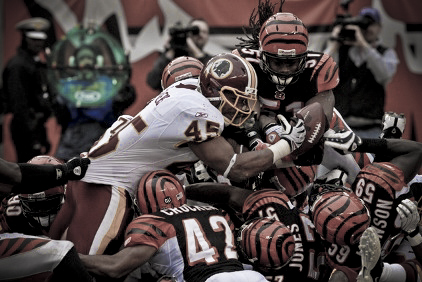 It don’t get any worse than this folks.

In fact, tight end Chris Cooley, who has played in 78 games since he joined the team in 2004, said the Washington Redskins’ 20-13 loss to the lowly Cincinnati Bengals Sunday represented a new low.

“This is by far the worst loss I’ve experienced since I’ve been on the team,” Cooley said in the locker room following an embarrassing loss that all but guaranteed the ‘Skins will be home for the holidays watching other teams compete in the NFL playoffs.

Cooley’s candor aside, several of his teammates echoed the tight end’s words and were left to try and figure out exactly where things went wrong. How did the Redskins go from being mentioned among the league’s elite at 6-2 to here, last in the division and still free falling at 7-7? More specifically, how did they manage to lose to the Bengals, when they came into the game a pitiful 1-11-1?

2. “No Excuses” by Alice in Chains

There are two possible explanations for where the Washington Redskins currently stand. One, the team has quit on head coach Jim Zorn. The other option is that this team just isn’t very good. Neither option is good. Mostly because both mean changes, once again, will be taking place this offseason at Redskins Park.

Was this a playoff-caliber team when Jim Zorn took over or were they simply a squad that got hot at the right time and overachieved to reach the postseason last season? Once that question is answered honestly, then we can begin to determine just how much work needs to go into rebuilding this franchise.

The problem is, well … the sheer number of problems this team is currently having. The offense can’t score points. The defense can’t make a fourth-quarter stop. Special teams should have clown music playing whenever they take the field. Honestly, we should just say the things this team is doing well instead of focusing on everything not going right. It would save time.

Take for example the punt return game. Everyone knows Antwaan Randle El has been absolutely worthless returning punts. Well, they put Santana Moss back there twice and he’s actually capable of making something happen. So what happens? Both times Moss had a punt return, the team was penalized. It’s as if they’re not used to having a competent returner back there, so they didn’t know what they were supposed to do once Moss took a return more than three yards.

While we’re on the subject of special teams, it’s readily apparent Shaun Suisham is not planning on being a member of the Redskins next season. Not only does he routinely miss field goal attempts, but then he decides to kick the ball out of bounds on a kickoff. He apparently tried to sneak back into the bench area after the play until Zorn screamed for him. An ear chewing followed that included many words not suitable for print. For the record, the only other time we saw a serious reaction from Zorn was after the team had to settle for a field goal to make the score 17-10. He just lowered his head and muttered under his breathe about the fact that the offense couldn’t get into the endzone. Clearly he said what most of us were thinking.

And speaking of that offense … where do we begin? Most days “poor execution” is to blame, or at least that’s been the coach’s go-to response week in and week out. Not today. This loss falls squarely on Zorn. How can you have one of the best running backs in the league and not use him on the goal line at least once? Mike Sellers is a very solid player, but if the 280 lb. fullback couldn’t get in the first time, then why go back on the very next play? Why not give the ball to Clinton Portis, who at last check was the NFC’s third-leading rusher? Seriously, this isn’t rocket surgery (to borrow a phrase from Joe Theismann). Stop trying to over think things and give the ball to your playmakers.

The offense has become stale and predictable. They don’t challenge opposing defenses at all and don’t take chances (unless you count throwing a four-yard pass on third and six).

While the losses are piling up, folks around town are jumping all over Redskins quarterback Jason Campbell, who admittedly needs to play at a higher level if this team is truly going to be competitive with the league’s elite. But here’s the thing – it’s not like everyone else on the roster is lighting it up while Campbell struggles. There are issues nearly everywhere you look.

Campbell got outplayed by a nobody quarterback named Ryan Fitzpatrick. But so did Portis, who got outplayed by Cedric Benson, the same Cedric Benson who was last seen getting pepper sprayed by police for drunk driving a boat. Sadly, this was the case for most of the positional comparisons between the ‘Skins and the lowly Bengals. For a creative offensive head coach, Zorn sure does run a predictable operation.

5. “I predict a Riot” by Kaiser Chiefs

All that being said, the Redskins absolutely should not fire Jim Zorn after just one season. Is he in over his head? Possibly. Do changes need to be made? Absolutely. But it would be a mistake to run the first-year coach out of town after his inaugural campaign. Management must resist the urge to do what comes all too easy at Redskins Park – overreacting in an attempt to save face while criticism mounts.

Zorn did something right at the beginning of the year and was able to get a flawed team to 6-2. He’s still the same coach capable of putting together a winner. He just needs some help, whether it be in gameplanning or transforming the roster to better be able to run a true West Coast offense. Don’t do it. Don’t fire Zorn. The right coach is on board. Instead of focusing on possible coaching replacements or other bad ideas, spend your time devising ways to help put him in the best position to succeed.

If nothing else, this link should serve as a reminder that things could always be worse. Not only have the Bengals been terrible for as long as folks can remember, but they also have the most embarrassing excuse for a “fight song” in the history of football. This is the actual song played at Bengals home games when the team scores. Seriously. We couldn’t make this stuff up.