kelly making most of opportunity 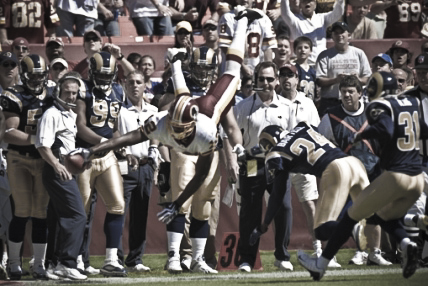 A year ago, there were whispers from folks around town wondering if the Washington Redskins had made a mistake drafting receiver Malcolm Kelly.

First, there was word from head coach Jim Zorn that Kelly and fellow rookie wide out Devin Thomas weren’t in great shape causing them to fail their initial conditioning tests. Then, nagging injuries sidelined Kelly and basically washed out any chance the rookie had of contributing in 2008.

What a difference a year makes. Kelly is now the team’s clear-cut second receiver and he had more catches against the St. Louis Rams last weekend than he did all last season. And for anyone who still might think he’s not totally committed to doing anything and everything he can to help the Redskins win, we present the following:

On the third play of the game, the Redskins faced third-and-nine from their own 26. Quarterback Jason Campbell threw a quick pass to Kelly, who was still several yards away from the first-down marker. As the defense closed in, Kelly remained determined to fight for every extra inch possible and went airborne in hopes of getting the first down (as shown in the photo above). He might not have made it, but dammit, that’s not the point.

He played the rest of the game with a wrist injury because of the play and still finished with four catches for 41 yards. Clearly, the kid is willing to do anything humanly possible to help the Redskins – even if it means occasionally falling short and getting dumped on his head.

Hey Malcolm, could you please step out of bounds next time? You’re an important piece to this offense and we kind of need you healthy.

“Naw, man,” he said. “I had to get the first down. That’s all that was on my mind, and I knew that most DBs don’t want to tackle a guy up top. So when I was going, I knew he was going to dive for my legs. But I guess I’ve got to work on my vertical a little bit, to go on ahead and get over him.”

What goes through your mind when your feet are above your head and you’re waiting to come crashing down?

“It happened so fast,” Kelly said. “As soon as I jumped up, I had one arm out like this because I was trying to reach out for the first down. Falling on my head or anything like that never really crossed my mind.”

This whole town is tired of settling for field goals. How close is this offense to having it all finally come together?

“I think we’re getting better and better every week, man,” he said. “Especially driving the ball – we’re driving the ball down the field. We just get real stagnant when we get down there. We just have to keep calling the plays and execute. We got down there two times and should have had scores, but we didn’t get the job done.

After a lengthy pause, Kelly continued.

We talked with Marko Mitchell earlier and said we couldn’t figure out why the coaches aren’t trying to get guys like you and him out there to run that fade route that worked so well in the preseason. Who do we need to pull aside to make that happen?

“Hey, you gonna have to talk to Z-Man about that one,” he said. (Laughs). “I’m not going to speak on that, you gotta ask him about that. You know, he calls the plays and he feels like we’ve got to go with what he thinks, you know what I’m saying? Whatever he calls, he feels like he’s putting us in the best position to make plays. We’ve got to go with that, but right after the game, we did put it in his ear that during practice this week we’re really going to focus on that red zone. Staying after practice and things like that. We’ll get it done.”

That’s nothing new though. Pretty much since camp you’ve been sticking around and getting extra reps with the quarterbacks …

“Oh yeah,” Kelly said. “It’s all about opportunity, man. The thing is, you don’t get many opportunities – especially early on being a younger guy – so when you get those chances to make plays; you’ve got to capitalize on it. If you go out there and they give you a shot to make a play and you don’t make it, they’re going to think this guy can’t make it and go to someone else. You’ve got to make the most of it.”