mitchell ready to make his mark 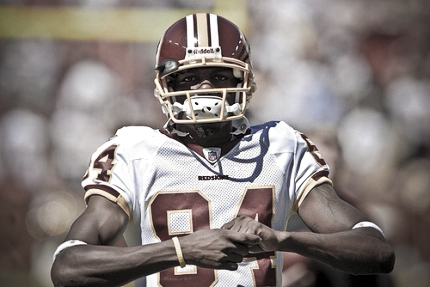 A thought occurred to us as we watched the Washington Redskins red-zone offense go missing in action this past weekend against the St. Louis Rams.

With the Redskins struggling to put points on the board, especially from close range, the question needs to be asked – will Jim Zorn and the coaching staff switch things up?

The Redskins failed to score a touchdown in five red-zone visits against the Rams, and are currently tied for 29th in the league in scoring. Jason Campbell and friends are seemingly capable of moving the ball up and down the middle of the field, but for whatever reason, look downright baffled any time they get in scoring position. Sadly, the only time Redskins players found the endzone was when they jogged through it at halftime as they headed to the locker room for their orange slices and juice boxes.

Meanwhile, there very well may be a secret weapon sitting on the sidelines waiting for his first chance to make an impact. Who? His name is Marko. Marko Mitchell.

Sure, Mitchell picked up those touchdowns against guys who are largely collecting unemployment right about now, but that shouldn’t be held against him. You can’t pick who you play against – you can only give your best in whatever situation the coaches put you in and hope that it is enough.

Mitchell finished the preseason with 11 catches for 113 yards and three touchdowns over the final three games. And since two out of his three scores came from the red zone, shouldn’t the ‘Skins at least consider trying him out in those situations?

We caught up with Mitchell, who has been active for the first two regular season games, but has only been on the field for a total of three plays, to see how he’s feeling these days.

“I’m feeling real good right about now,” Mitchell said. “We didn’t play like we wanted to, but we still got the win in the end.”

How important was it to get things turned around after the loss in New York?

“It was definitely important,” he said. “No one in the NFL likes to lose. By us messing around and starting off 0-2, it wouldn’t have been as bad, because it’s the beginning of the season. But we really wanted to get this win up under our belt.”

The offense is really struggling to put points on the board these days and every time we saw you in the preseason, you were making plays and putting points on the board. Who do we need to talk to in order to get you onto the field to help these guys out?

(Laughs). “Well … I mean … I’m not the one calls the plays or anything like that,’ Mitchell said. “The only thing I can do is, whenever my number is called, go out and make plays.”

Are you at least doing that old trick where you stand real close to coach in hopes he’ll see you and throw you in the game more often?

(Laughs). “Of course,” he said. “I’ve got to stay around the coaches anyway, just in case something happens and it’s time for me to go in. You’ve always got to be prepared. This is a physical game and you never know what might happen.”

What should we chalk the offense’s struggles to?

“Basically, everybody knows what they’ve got to do, it’s just all about going out there and executing,” Mitchell said. “Little bitty penalties. A couple of dropped balls. Busted plays. Those are things that you can’t do. I don’t care what level you’re at – if you’re at high school or college level – those things are not good. We’ve got to take advantage of red-zone opportunities.”

What are you doing to stay sharp until they call your number?

“I can’t do nothing except stay on the sidelines and try to keep myself loose,” he said. “That’s about all I can do.”

Consider this the beginning of the Marko Movement. We are officially requesting that if the team is going to have Mitchell active on game day, the least they could do is … you know … actually use him.

A year ago the Redskins gave a seventh-round safety by the name of Chris Horton a chance, and he’s become a staple of the defense. Why not roll the dice one more time and see if this seventh-round receiver can do the same for the offense?