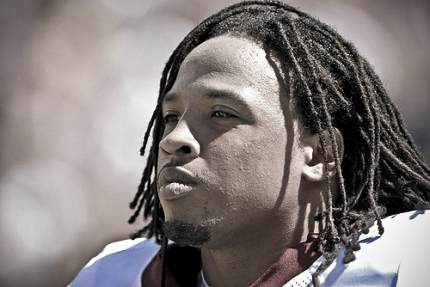 Okay, we admit there wasn’t a lot to love in the Washington Redskins’ 9-7 victory over the St. Louis Rams Sunday. The head coach’s playcalling abilities have been brought into question after another less-than-stellar outing, the offense sputtered any time they were in a position to actually put points on the board and the defense continued to let their opponent convert too many third downs.

But all is not lost.

First of all, the Redskins did not play their best game, and yet, still came away with a win. In a league where victories are hard to come by, that is always huge. And the second takeaway was the inspired play of safety Chris “The Predator” Horton, who provided the game’s two biggest highlights when the outcome was still very much in the balance.

With St. Louis in a position to retake the lead in the fourth quarter on third-and-goal from the nine, the talented safety delivered a monster hit on Rams wide out Donnie Avery that jarred the ball loose, and cornerback Carlos Rogers recovered the fumble.

Horton’s second highlight came on the Rams’ final offensive play of the day. On fourth-and-10, Marc Bulger threw a pass deep down the right sideline to Avery, which Horton defended beautifully to end the game. The play was eerily reminiscent of the 43-yard bomb Bulger completed to Avery a year ago which enabled St. Louis to kick the game-winning field goal – giving the Rams one of their two wins in 2008 while providing the Redskins with a stomach-punch loss to an inferior opponent.

So naturally, we caught up with Horton after the game to talk about his memorable performance and the team’s first win of 2009.

The game was getting scary there towards the end and you guys definitely needed someone to step up and make a play. Go ahead and walk us through your big forced fumble.

“I think we might have been in man coverage and my job is to read the quarterback,” Horton said. “Once he threw it, I just ran over there and it’s just one of those things – I got the ball out, but it wasn’t because I did anything special. I wasn’t trying to cause a fumble or anything. I just read the play and ran to the ball. I feel like every time I do that, something positive always happens.”

These early-season home games have become your calling card. A year ago you burst onto the scene with your monster game against New Orleans and you did it again against the Rams. What’s really going on?

“I just try and come out the gate and make plays,” he said. “One thing I’m really trying to focus on though is later in the year last year I kind of hit a wall. Everything got overwhelming and I started to feel really sore and beat up because it was my first NFL season. This year, I’m learning how to take care of my body more. It’s one of those things – I want to start fast and try to continue it throughout the entire season.”

There was some serious déjà vu on the fourth-and-10 play, where Bulger aired it out for Avery. A year ago they connected on that play, but this time around you made the play to seal the win. What did you see on that play?

“Basically, we were in Cover 2, but it turns into man-to-man once he gets that far down the field,” Horton said. “I was just thinking, ‘Keep running and don’t let this guy catch the ball.’ I knew I had a lot of guys counting on me, and I happened to make the play.”

We double checked the standings and the NFL doesn’t keep track of ugly wins versus pretty wins. How big was it for you guys to pick up this victory?

“Very big, very big,” he said. “A win is a win, you know. It doesn’t matter how many points you win by. If they gave out half points and we could win by half points, we’d still take the W.”

While Horton preferred to downplay things believing he was just doing his job, his teammates definitely took notice that when the game was on the line, “The Predator” was there to finish the job.

“It was huge,” said linebacker Brian Orakpo of Horton’s forced fumble. “Because if they converted on that play, who knows what happens. They could keep driving and score a touchdown or fieldgoal, and the game is lost. Horton made a huge play on the ball and we thank him for that and for getting us off the field.

“He’s a hard-nosed, hard-hitting safety who plays very smart and is just a guy who is all over the field,” Orakpo continued. “I really try to learn him.”

So, even though there is still plenty of work still to be done on the 2009 Washington Redskins, because of the play of guys like Chris Horton, the team was able to sneak away with a victory. And if Horton’s play inspired a guy like Orakpo to find ways to improve his game, well, then some good came out of Week 2 after all. With all of the negativity out there this week, it’s nice to have at least one positive to focus on.