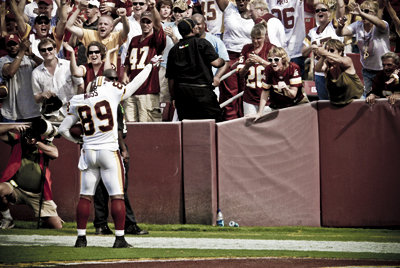 As is tradition around these parts, here are five songs in honor of the Washington Redskins 29-24 victory over the New Orleans Saints.

Feeling more like July than September, the conditions on the field at kickoff were downright brutal with a heat index of 105 degrees at FedEx Field. And while the heat could have made a lesser man falter, quarterback Jason Campbell rose to the occasion. The football gods gave him a 105 degree day, and he responded with a 104.1 quarterback rating.

Campbell haters will not be pleased to hear that J.C. went seven for seven in the fourth quarter for nearly 160 yards and a game-winning 67-yard touchdown to Santana Moss. Nearly as big as the touchdown was the gutsy completion to Moss again, this time on fourth and two with roughly two minutes to play. For a guy labeled as a quarterback who won’t ever make it in the West Coast offense, he sure did play the part today – completing 67 percent of his passes and finishing with that sparkling QB rating.

Redskins starting safety Reed Doughty was so sick with flu-like symptom Sunday morning that he texted his backup, rookie Chris Horton, at 8 a.m. to tell him there was no way he would be able to take the field against the Saints. Coach Jim Zorn said after the game that the team took Doughty to the hospital to try and calm his stomach, but that every time Doughty even tried to jog, he threw up.

No one knew what to expect with Doughty sidelined and a seventh rounder making his first NFL start against New Orleans high-powered offense. And even in their wildest dreams, ‘Skins fans couldn’t have envisioned Horton exploding onto the scene with two interceptions and a fumble recovery. While that’s great news for Horton and Redskins fans, it’s not so good for Doughty. While he probably won’t admit it, watching a seventh-round compensatory pick claim his job while he had an upset tummy couldn’t have made his day any brighter.

Thanks in large part to nagging injuries last season, Redskins receiver Santana Moss barely resembled the game-changer ‘Skins fans had come to know and respect. Instead of choosing to give Moss the benefit of the doubt for trying to play while hurt, folks began to whisper that maybe his best days were behind him and if the Redskins wanted big plays out of the receiving corps again, they should probably consider finding someone else to get the job done.

Fast forward to yesterday, when the ‘Skins were down by nine points with around six minutes to play. If someone didn’t step up and make a play, then the home team would have found themselves in the unenviable position of 0-2 against a stacked NFC East. We already mentioned the 67-yard touchdown, but just as vital was Moss’ eight-yard catch when the ‘Skins opted to go for it on fourth and two. For the day, Moss finished with seven catches for 164 yards and the touchdown. Good thing rumors of Moss’ demise were a bit premature.

Here’s something ‘Skins fans can relish from the post-game news and notes:

Moss’s 67-yard touchdown from Jason Campbell marked the fifth straight contest, including playoffs, in which he has caught a touchdown. He is the first Redskin since Charlie Brown in the first five weeks of 1982 to record a touchdown reception in five straight games.

How about those Redskins special teams on Sunday? The rookie punter averaged 33 yards a punt for the game and botched a hold on a field goal attempt. Saints returner Reggie Bush returned a punt for a 55-yard score. And if that’s not enough to make special teams coach Danny Smith lose it, Antwaan Randle El continued his quest to drive Smith to an early death with his play as a punt returner. We’ve been subjected to his patented “one step to the left, one step to the right, fall forward for a two-yard gain” since he came to town, but on Sunday he decided to also throw a fumble into the mix. Of course that blunder resulted in a touchdown for New Orleans. If not for a solid day defensively and the heroics from Campbell, Moss and the offense, today’s story would be all about the horrid play of the Redskins “special” teams.

5. “Testify” by Rage Against the Machine

This one goes out to me. Turns out that in addition to patrolling the sidelines while watching my favorite team come from behind for a much-needed victory, I also managed to win $100 yesterday. I bought four squares in the office pool and won the first and third quarters, turning my eight buck investment into 100. That means today I get to pick up Rock Band 2 with my winnings, and will gladly enjoy thrashing to some Rage this evening.