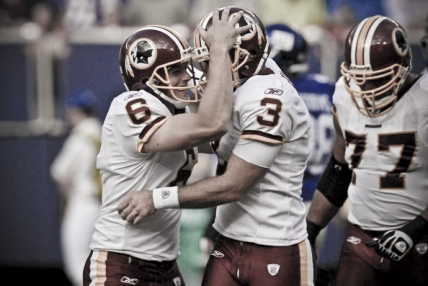 Unquestionably, the highlight of the Washington Redskins season-opening loss to the New York Giants was an eight-yard touchdown run by punter Hunter Smith just before halftime.

Trailing 17-0 with less than 30 seconds remaining in the first half, the Redskins decided to go for a fake fieldgoal and caught the Giants sleeping, as Smith took off untouched down the right sideline for an easy score.

So we wondered – how excited were the special teamers when the play call came in?

“They really don’t tell me a lot,” said snapper Ethan Albright. “For me, I do the same thing – I snap it. I really don’t need to know if it’s a fake or not. So I’m not involved in the planning or anything like that.”

Settle down, big fella. No need to get crazy here.

“It’s a very rare occurrence,” Smith said of just the second touchdown of his 11-year career. “And momentum is such a huge part of the game in the NFL, and that was a momentum shifter a little bit for us. It’s one of those deals where you wish you could get it done in the end, so it would have been a little bit sweeter.”

How long has that play been in the works?

“We just saw something this week – something new we could go after,” Smith said. “We took a look at it [on film], practiced it and it worked just like we practiced it.”

If someone would have told you that you’d be the first Redskin to score a touchdown in 2009, would you have believed it?

As we previously mentioned in our Giants playlist, this was not Smith’s first NFL touchdown. He scored on a 21-yard fake fieldgoal run in 2003 as a member of the Indianapolis Colts. But did Smith remember his other touchdown?

“Uh … I scored against the Jets,” Smith said. “Back in 2000 and something. It was not nearly as much of a sure thing. It was actually very risky for us at the time.”

So what goes on in your mind when this fake is happening?

“It’s kind of all in slow motion,” he said. “It happens and then suddenly it’s over with and you go ‘Oh wow. That just worked.’ It’s probably not like it is for position players. They probably feel the game and see the game.”

It kind of looked like you were high stepping a little bit. What say you?

(Laughs). “No, no, no,” Smith said. “I didn’t know if someone was behind me and I wanted to make sure no one tripped me up at the line.”

So is this something you’re going to be lobbying for coaches to call up more often?

“I think the last one was five years ago or something, so this may be an every five year kind of occurrence,” he said. “People have to forget that you can do it before you can do it again.”

Even if this is something Smith doesn’t anticipate seeing again for the foreseeable future, it doesn’t mean his teammates can’t get excited.

“It’s great to have an athlete like Hunter, where those kinds of plays are a possibility,” Albright said.

Well … not all of his teammates.

“Who is Hunter Smith,” asked tackle Chris Samuels. And sadly, he was completely serious.

When informed by linemate Derrick Dockery that Smith was, in fact, the team’s punter, Samuels said, “Oh, I thought he was a guy on the Giants or something.”

Touchdown or not, that should tell you just where punters rank in the big picture to a football team. They’re happy to take the points on his fake fieldgoal run … as long as they don’t have to learn the guy’s name or anything.